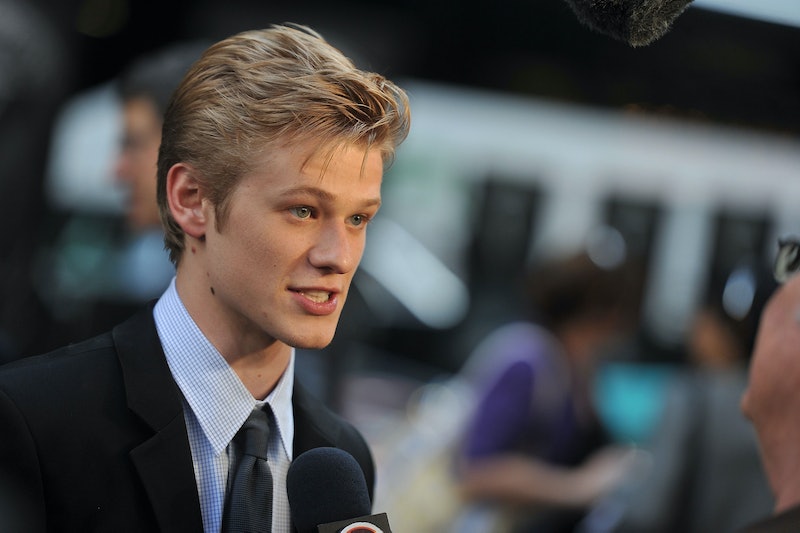 If everything old is new again on television, then it's only fitting for an iconic television character to get a reboot — Swiss army knife and all. That TV character is trained scientist and all-around "problem solver" Angus “Mac” MacGyver. Mac rose to fame during the 1985 to 1992 ABC television series MacGyver, in which he was portrayed by actor Richard Dean Anderson, and now the duct tape-touting hero will receive the 2016 treatment with a brand-new CBS show. This time around, actor Lucas Till will play the titular MacGyver, and a new sneak peek of MacGyver 's production from TVLine proves that Till has the chops to take on the character. (Not to mention the strength to hang onto an airplane while trying to ground it with his famous Swiss army knife.) Till seems to be a worthy MacGyver, but where do fans already know Till from? His previous roles have prepared him for this CBS series.

If you're a fan of all things superhero, then you already know that Till is a part of the X-Men universe. Till portrays Alex Summers, a.k.a. Havok, in the mutant series, beginning with the film X-Men: First Class in 2011. He would go on to reprise his role in 2014's Days Of Futures Past and 2016's Apocalypse, but the role of Havok was hardly his first major Hollywood role. In 2005, Till played Jack Cash, Johnny Cash's younger brother, in the biopic Walk The Line. Though the role was small, it clearly caused the industry to take notice: in 2009, Till won the role of Miley Cyrus' love interest in The Hannah Montana Movie.

If none of those roles ring a bell, you may recognize Till from a part that's neither in television or on film. That's because Till played Taylor Swift's love interest in the "You Belong With Me" music video, which just so happened to be the very same video that Kanye West slammed as not being nearly as good as Beyonce's "Single Ladies." Whether you agree with that point of view or not, you have to admit that Till could not be any cuter in this romantic comedy-inspired video:

Hollywood has spoken: it has given the world their new MacGyver, and he certainly is dreamy.

More like this
Taylor Swift Calls Dwayne Johnson "The Man" After Revealing New "Taylor's Version" Song
By Jake Viswanath
Taylor Swift & Her Mom Clap Back Against The “Shake It Off” Plagiarism Lawsuit
By Jake Viswanath
Lauv Is No Stranger To Taylor Swift, Drake, Ed Sheeran, & Fame
By Alyssa Lapid
Bridgerton’s Simone Ashley Stars In ODESZA's "Love Letter” Music Video
By Radhika Menon
Get Even More From Bustle — Sign Up For The Newsletter