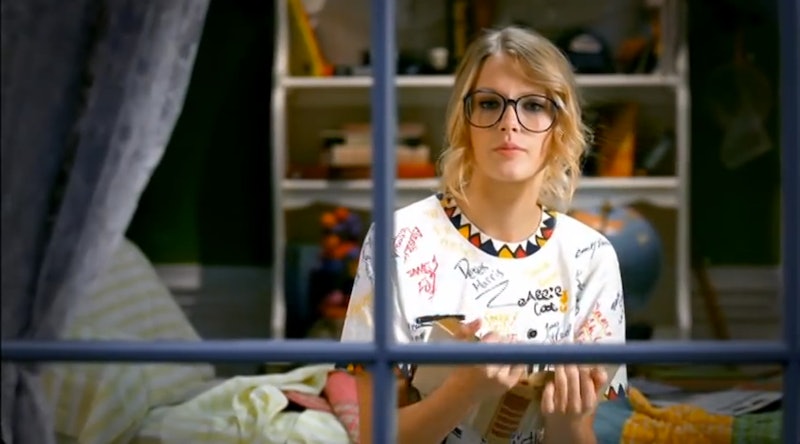 It was a simple time in our lives in 2009. Honestly, I don't remember much of it, but I do remember a certain infamous incident at the 2009 MTV Video Music Awards. Ever blunt Kanye West snatched the microphone out of Taylor Swift's hands when she went onstage to accept her award for Best Female Video and informed Swift in a line that would soon become an insanely hilarious meme: "Yo Taylor, I'm really happy for you and I'ma let you finish, but Beyoncé had one of the best videos of all time." At the time, none of us could believe that West could be that much of a jerk to then-rising star Swift, and even Beyoncé later allowed Swift to come onstage during Beyoncé's own award acceptance to finish her speech. But now, five years later, it's worth considering... Was West correct?

Don't get me wrong. He was definitely in the wrong to leap up onstage and ruin Swift's first time winning an MTV Video Music Award. Whether you agreed with what he was saying or not, that was still a really terrible thing to do to a 19-year-old girl. However, I'm sorry to be the one to break it to the Swifties, but in hindsight, West was speaking the truth. I'm sorry, Swift, but Beyoncé really did have one of the best videos of all time in "Single Ladies (Put a Ring on It)." How do I know? Well, let's break it down.

Let's start with the reaction to "You Belong With Me." Although many critics at the time praised Swift for her dual performance as the ignored enamored best friend and the pretty, bitchy cheerleader, many others found the video a little sappy and too much of a rom-com. To be fair, that was and is Swift's entire aesthetic, but you can't deny that "You Belong With Me" didn't really add anything new. It just made her the first country music star to win an MTV Video Music Award and gave her insane crossover appeal.

The thing is, "You Belong With Me" is a video that's inspired by teen romantic comedies rather than one that inspires anyone or anything else. Swift was singing about a relatable situation that we've all probably been in at least once and she fell back on old tropes in the music video to do it. Pretty much the only thing about "You Belong With Me" that stood out from any She's All That or Sixteen Candles–esque film was Swift playing the role of both girls in the love triangle. Otherwise, the video was more forgettable than the song.

Then there's "Single Ladies (Put a Ring On It)." Ignoring for a moment that Beyoncé is Beyoncé, it might not objectively seem like a superior video. After all, Swift told an entire narrative to go along with her song while Beyoncé went minimalist, filming only herself and her two backup performers dancing around to the song for three minutes. It's one of those videos that quite literally looks better than it sounds, because summarizing it as "Beyoncé dancing" really doesn't capture what was so special about it, now does it?

Despite that, Beyoncé's video is iconic. Not only did it spawn thousands of imitation videos that were posted on YouTube from all over the world, but it's also become an integral part of the public zeitgeist. Instead of being inspired by something, like Swift's video, Beyoncé's video has inspired numerous parodies, references, imitations, and homages. Remember Season 1 of Glee when Kurt Hummel was an amazing football player as long as he did the "Single Ladies" dance beforehand?

Or when Joe Jonas posted his own imitation video on the Jonas Brothers' YouTube channel?

Or when Barack Obama, the President of the United States, did the "Single Ladies" wave?

Swift's song might have been covered many times, but there's not much new or groundbreaking in her video to parody. Beyoncé, on the other hand, achieved all of this with a cheap (compared to her other videos) and quickly made three-minute clip of herself dancing. Besides, of the two, Beyoncé's song and video is the one that has a more positive and feminist-friendly message. In "Single Ladies," these empowered women — who are the only ones who appear in the video — are showing how much they don't need a man who wasn't smart enough to see what he had until it was gone through their choreography.

But in "You Belong With Me," Swift's lyrics imply that she's better suited for her best friend because she doesn't wear short skirts and high heels and her video portrays a girl who doesn't get the guy until she looks completely different from how she's looked in the rest of the video. It's a happy ending, but it's kind of a contradictory one. At the end of the day, if I'm going to be talking about an amazing Swift video, I'd be talking about "Shake It Off" rather than "You Belong With Me." But if I'm going to be talking about an amazing Beyoncé video, well, "Single Ladies" would make the top three. It really was one of the best videos of all time.