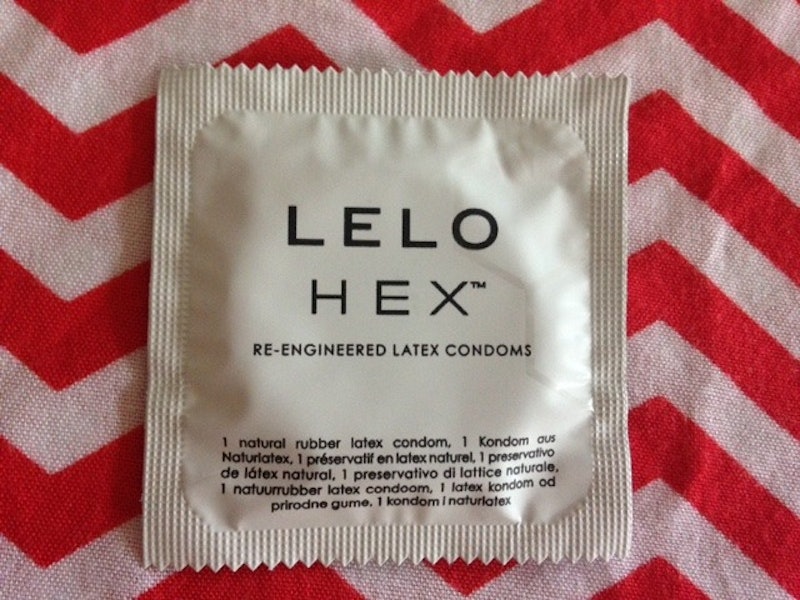 LELO, that high-end sex toy brand you probably know about because you lust after their super-sleek products, recently announced that they were revolutionizing the condom. Yeah, those things that you know you should wear to protect yourself against sexually transmitted diseases (STDs) and unwanted pregnancy, but that aren’t, you know, something you’re necessarily jumping for joy to put on. They're called HEX condoms, and their design is being branded as “The World’s First Re-Engineered Condom”. The patented HEX structure (there are actually tiny hexagons on the condom) claims to address the three main issues that come along with most condoms: discomfort, slippage, and breakage.

I was skeptical — but excited by the idea of a breakthrough. Condoms have been around for a long long time, with some folks saying they date back to 11,000 B.C., although we know for sure that by the 1400s A.D. people were using products including animal intestine, oiled silk paper, and animal horns or shells to cover the tip of the penis. Condoms as we know them came into existence in 1839, when a guy named Charles Goodyear made the first rubber one (aka not out of part of an animal). Hence the term “rubber”. But I digress.

While condoms are not only a great method of birth control and are the primary way humans can get freaky without transmitting STDs, the reality is that people aren’t using them as much as public health folks want us to. For instance, only 60 percent of sexually active teenagers use condoms. Which is, let’s face it, a grade D, if not a D-. And it gets worse — rates of condom use go down the older people get. Somebody do something!

In 2013, Bill and Melinda Gates, owners of much money, launched a competition to revolutionize the condom, which hadn’t experienced much innovation lately. Their $100,000 award spurred some pretty wild ideas, but none have yet to hit the market. Enter LELO's new HEX condom — could this be the breakthrough we're waiting for?

My partner and I checked out the HEX condom, and here is what we found.

1. The Packaging Is Easy To Open

HEX is packaged with what feels like strong paper, as opposed to the usual tin foil or plastic. This makes it easy to rip with your fingers. My partner said he felt like he could open it in the dark, which is I guess relevant to how some people have sex. I liked that it was easy to open with hands already slippery from lube or vaginal juices, which is often the case by the time you are ready to grab a condom.

You know how with most condoms you pull it out of the package and then you have to look at it, turn it up and down, to figure out which way is right side up? HEX comes just the slightest bit more unrolled so you can easily tell which direction is correct. Which is a great time-saver for when you’re ready to get it on!

One of the main complaints about condoms is that they constrict the penis, making the person attached to that body part feel less pleasure. This has a lot to do with people wearing condoms that aren’t a good fit for them (and we’ll say that while this was a good fit for my partner, it probably won’t be for everyone because there’s so much variety out there!), but we were both impressed by how stretchy the HEX condom is. Yes, we blew one up to show you just how stretchy we mean.

4. The Base Isn’t Constrictive

This is sort of a corollary to the HEX’s stretchiness, but it’s so important for fit that we wanted to separate it out. Most condoms feel like they rely mostly on the base to stay on, which can provide much of the constrictive feeling people don’t like. HEX stayed on without putting so much pressure on this area — at least for him. It also didn’t roll up during the action, which happens with lots of condoms and can be stressful, if you have to constantly pay attention to it.

5. The Material Is Very Thin

The challenge of condom engineering is to use a material that basically feels like it’s not there, but that is also durable enough to reliably protect you. HEX felt super thin and strong — I felt the hexagonal pattern ever so slightly in the beginning, but then I, you know, got distracted. (Plus, the pattern had a nice feel while I was noticing it.) My partner said it was the thinnest feeling condom he’d ever tried, but that he wasn’t worried it was going to break as a result.

6. We Liked The Aesthetic When It Was On, Too

Even if you don’t get a colored condom, most condoms on the market still have some sort of color to them, which makes the penis wearing them look a bit alien. HEX was way more transparent than other “clear” condoms we had on hand, and it didn’t have that powdered look latex condoms often have. Since we both like how penises look, it was great to be able to have one all wrapped up and safe but in a way that you can see it!

We both thoroughly enjoyed our romp with the HEX. My partner said it was the strongest orgasm of his life that he's had wearing a condom (with lots of that attributed to his partner of course!!) and I had a similarly delightful time. Does HEX “revolutionize the world of condoms for good,” as LELO boasts on its website? I think that completely depends on an individual’s personal barriers against condom use. If penis constriction is the main one, HEX might solve that. It did for us.

Of course, you still have to put it on before you have sex, an annoyance many cite as a reason why they don’t use condoms. And if the reason why you don’t like condoms is that there’s a physical barrier between you and your partner, while the HEX barrier feels thinner than other condom options currently on the market, it definitely still exists. That said, I think I can safely say these condoms are well worth the price of admission.

More like this
The Best Time To Date After A Breakup, According To Experts
By Bustle Editors
What Is The Forest Personality Test? The TikTok Trend, Explained
By Georgina Lawton
Expert Tips For Being On Top When You're Plus-Size
By Lexi Inks
The Top Mistakes Scorpios Make In Relationships (& How To Avoid Them)
By Nina Kahn
Get Even More From Bustle — Sign Up For The Newsletter