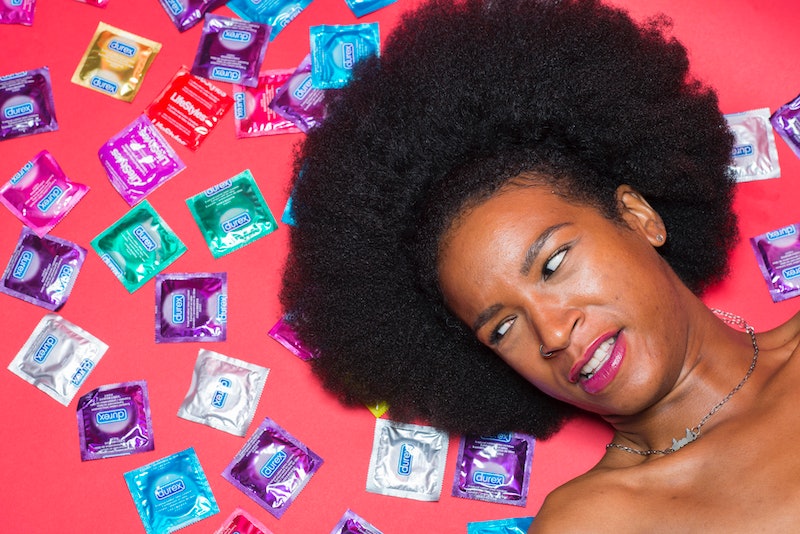 We at Bustle love giving you tips for how to tap into your sexual potential and troubleshoot when things aren’t going your way in the bedroom. But what about finding solutions to those stressful sexual health situations that inevitably crop up when you’re getting down? Emma Kaywin, a Brooklyn-based sexual health writer and activist, is here to calm your nerves and answer your questions. No gender, sexual orientation, or question is off limits, and all questions remain anonymous. This week’s topic: how to put a condom on a penis — plus everything else you need to know about them.

Q: I’m super embarrassed to even say this, but I need information about condoms. I grew up in a place where we didn’t get good sex ed, and my mom’s idea of initiating me into the world of sex was to leave a handful of condoms and a Planned Parenthood pamphlet in my underwear drawer one night when I was out with friends. Now I’m sleeping with dudes and they always have condoms and put them on, but I want to know how to do it — to make sure they’re doing it right — plus, what if someone asks me to put a condom on him and I mess it up?

A: There’s no shame in asking for a bit of advice to make sure you’re using something correctly! And the reality is that many people don’t know enough about condoms, even though they're one of the most commonly used forms of birth control, particularly among teenagers, women in their 20s, and women who have one or fewer children. So we should probably take a moment and brush up on our knowledge, right?

After all, condoms (both male and female) are actually the only methods of contraception that also protect you from STIs. If used correctly, condoms are 98 percent effective against pregnancy. Unfortunately, with typical use this drops to 82 percent. Why the huge difference you ask? It’s because not everyone knows how to use condoms correctly. Let's fix that.

Exactly How To Put A Condom On Correctly

Most condom boxes (if you buy more than one at a time) come with an instruction packet that has some diagrams telling you how to put on a condom correctly. But here are the fool-proof instructions so you can do it by yourself, no blueprint needed!

A note before we begin: Start these steps before you start fooling around. Pre-cum or pre-ejaculate — aka the stuff that comes out of the tip of the penis before ejaculation — may contain traces of sperm and definitely can transmit some STIs, including including HIV, gonorrhea, and chlamydia. OK, onward.

Condoms do expire, and when they expire you shouldn’t use them anymore because the material they’re made of can be brittle and break. So check the date!

When you tear the foil or plastic packet, make sure not to tear the condom. If you do tear it, just start over with a new condom.

Step 3: Orient The Condom Tip Up

This is harder than it sounds, because sometimes both directions can look pretty much the same — particularly if you’re in a hurry to have sex, or you’re in a romantically lit room (or have taken your glasses off to make out ... that can’t just be me).

You’ll know you’re oriented correctly if you can unroll the condom with the tip facing up. If not, it’s backwards, and all you need to do is turn it upside down, pop the tip out so it’s facing the other way, and then you’re set!

… Of the condom, not the cock!

You have to leave a bit of room in the top of the condom to allow the semen to have a place to go during ejaculation, and you don’t want that room to be filled with air because bubbles can pop. A half-inch is a good amount, so pinch the tip of the condom with your thumb and pointer finger before you put the condom on. Pro-tip: put a dab of lube inside the condom before you do this — it will feel great for the cock it’s about to envelop.

Step 5: Place The Condom On The Tip Of The Penis

This step is pretty self-explanatory, but one note: if the penis in question is uncircumcised, also roll down the foreskin during this step. Gently! It’s sensitive.

Step 6: Roll The Condom Down To The Base Of The Penis

While still pinching the tip of the condom to make sure no air gets into the space you’re leaving at the top, use your other hand to roll the condom down the sides of the penis you’re working with. Smooth out any air bubbles, because friction against these can cause breakage.

Even if you’re not done having sex, once the penis has ejaculated into the condom, you’ll need to stop for a second to deal with it. Pull out before the penis gets soft, and make sure not to spill the semen out of the condom. To do this, hold the condom at its base while pulling out occurs.

Step 9: Take It Off And Dispose of It

To take a condom off a penis, start from the base (where the ring is, by the balls) and roll it off. Get rid of the condom in whatever way you like — trash can, down the toilet, feminist art project. If you don’t want to make a mess, you can tie it in a knot to keep the semen inside. Like a tiny balloon prison for millions of sperm.

By this I mean repeat these steps with a new condom. This is not the time to be eco-friendly.

What if My Condom Falls Off Or Breaks?

If the male condom you’re using with your partner falls off or breaks, it’s no longer a barrier. That means it’s not blocking semen from getting into your body.

Before you panic, it’s important to figure out when during sex this happened. If it happened before the penis in question has ejaculated, then you’re just dealing with pre-cum, which as we now know may have a bit of semen in it, but isn’t a huge risk for pregnancy and is a low risk for STIs. So you can reasonably put on a new condom and carry on.

If you notice the incident after ejaculation, then there’s semen inside you. If the semen ends up in your vagina, then you have some fast thinking to do. If there’s a chance you’re at your fertile time (if you don’t know what I mean by that, check this handy explainer I wrote here), you should go out and get Plan B, aka emergency contraception, a single pill that greatly decreases your chances of becoming pregnant if you take it within 72 hours. If you don’t know your lover’s HIV status (or you know that status is HIV positive), you should go to your nearest clinic (or emergency department if it’s in the middle of the night or over the weekend) and get Post-Exposure Prophylaxis, a course of 28 pills that greatly decreases your chances of becoming infected with HIV if you start the medicine within 72 hours. This goes for anal sex as well, because you can get HIV through both these orifices.

Anything Else I Need To Know?

Knowing how to put a condom on is only half the battle. It’s also really important to find the condom that fits the cock you’re involved with, because there are a bunch of different sizes and shapes out there. If you feel comfortable, go into a sex store and talk to the people working there about your partner’s shape and size (if you have only one partner), or you can go online to read reviews — Babeland has photos of unrolled male condoms on their website to give you an idea of what penis they might fit best. If you don’t have a specific penis in mind or are dealing with multiple cocks, get an assortment! Trying on different sizes with a partner can be fun and sexy all on its own.

It’s also important to know if one of you has a latex allergy. If that’s the case, no need to fret — there are plenty of options out there that are made with different materials. (One note though — animal membrane condoms don’t protect against STIs, only pregnancy.)

Many people like pairing male condoms with lube, but it’s important to know which types are compatible with condoms — because some ingredients in lubricant can actually cause condom material to break down.

For all condoms, you can use silicone or water-based lubes. Just make sure that if you have a vagina and you’re planning on putting lube inside it, your lube choice doesn’t include glycerine, because this can give you a yeast infection. Oil-based lubes don’t work with latex or polyisoprene condoms, but are compatible with polyurethane and animal membrane condoms.

Male condoms are just one option in a large and growing cornucopia of contraception. However, they are one of just a small list that protect you against both pregnancy and STIs. For this reason, some people like to use them alongside other methods of birth control — for extra protection. It’s up to you to choose what method (or methods) works best for you.