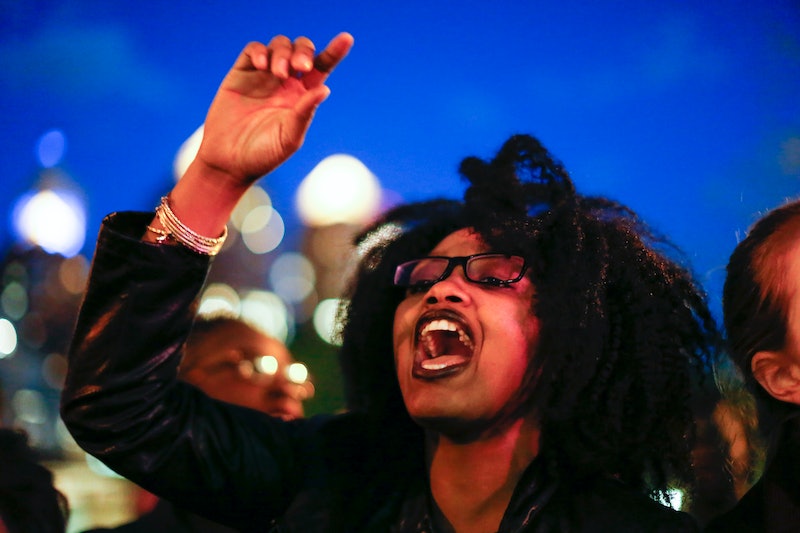 The truth is, however, that after reviewing America’s history with people of color, specifically black and indigenous people, the cycle of police brutality against black and brown people does not lack sense at all. It makes perfect sense.

Sense: (n) a faculty by which the body perceives an external stimulus; one of the faculties of sight, smell, hearing, taste, and touch; a feeling that something is the case: (v) perceive by sense of senses.

Native American cultures were flourishing when the abrupt colonization of the Americas began. Europeans learned what they could from the indigenous people before they began the slaughter and rape of millions while simultaneously introducing them to new illnesses such as smallpox, measles, yellow fever, and cholera. Dismembering their tribes, Europeans forced Native Americans into a small corner of their own world, disregarding their ways of life. Waving goodbye to their homes, crops, and land, Native Americans settled into the reservations so graciously given to them by their white occupiers. Many native children were forced to attend white schools which deemed their culture's way of living inappropriate, often demanding that young boys cut their hair and all children drop their native tongue while learning skills that white people saw as “civilized.” As with most minority groups, discrimination and bias brought about increased poverty, lower education rates, and fewer employment opportunities, leading to trends of alcoholism and higher suicide rates.

Meanwhile, in the early 17th Century, poorer white Europeans and some black people of various origins served as indentured servants. North American settlers began to utilize African slaves as a less expensive source of labor, bringing the first 20 slaves from the coast of West Africa to Jamestown, Virginia in 1619. For centuries, black people in America were seen as nothing more than machines. They worked, they rested, they worked more. Uprooted from their homes and shackled, Africans lay next to their dead brethren and soaked in their own feces on ships until they reached the New World.

After reviewing America’s history with people of color, specifically black and indigenous people, the cycle of police brutality against black and brown people does not lack sense at all. It makes perfect sense.

Under white masters, families were broken and separated. Women were raped and impregnated, only to have their children ripped from their arms while they breastfed and raised white children. Men were dehumanized and beaten. The beautiful curly crowns that topped women's heads were forced to be covered, because white women could gain that volume, only to end up producing elegant head-wraps and scarves which attracted the attention of white men, forcing black women back to their original locks. Their bodies swung from trees as white people spent their free time throwing extravagant parties and strolling through cobblestone towns with umbrellas and long sleeves as to avoid the sun that burned their pale skin and illuminated the skin of their laborers. The police and Ku Klux Klan were often one force, interchanging their badges for white hoods as day turned into night, burning crosses and performing rituals. Black men and women were murdered day after day for simply existing in a country they didn’t even choose.

On June 19, 1865, called Juneteenth today, slavery formally ended, leaving black people impoverished, homeless, and jobless, pushing many to remain on their plantations. As the 1900s moved forward, white people enjoyed the constant changes in fashion, hair design, and music while former slaves and black people who immigrated to the states struggled to make a way of life. Redlining forced them into poor neighborhoods with little education, and their murders still stood as justified. Black schools were run down and equipped with old and outdated textbooks, leading to decreased graduation rates. Gang violence, undernourishment, alcohol and drug abuse proliferated.

After being sprayed with high-powered water hoses and chased by barbaric police dogs, black people retreated to disgusting water fountains and restrooms labeled “Colored.” Even recreational activities were unavailable. Swimming pools were off-limits to black people, preventing them from learning how to swim or even seeing swimming as a necessary skill, hence the longstanding stereotype. Women, including my own mother, had to pass a "paper bag test" to be deemed white enough to interact with. Both of my parents' birth certificates read “colored” as their race. My parents are only in their 50s.

The cycles of dehumanization, murder, and segregation still have an effect on black and native people today, because there was never an end to the negative connotations associated with these groups. The movie industry continues to place white people in positive roles people of color should play, leaving black actors to play thugs and Native Americans to play “Indians.” It has been ingrained into society's collective consciousness that brown is bad and white is good, especially in the police force. When the people who are appointed to serve and protect evolved from a group that adorned themselves in KKK attire, it's no wonder that many police officers are afraid of black and brown people. It makes sense.

White people in America have never written themselves as the bad guys, because they’ve always had the power to do so. If you look in American history textbooks, the genocide of native people is gently referenced. The beginning of American history begins with colonization, as if nothing great came before the Europeans' arrival.

The inherent and deep-seated fear of losing white privilege continually leads to the defamation of Native American and black people. The longer brown and black people are viewed as lower-class citizens, the longer white people hold privileges like walking away alive after murdering nine black churchgoers and being taken to lunch on the way to the precinct, raping a girl next to a dumpster and receiving a slap on the wrist, or being acquitted after shooting an unarmed 17-year-old-boy.

The murders of black and Native people aren’t senseless, and will not be senseless until racial inequality doesn’t make sense.