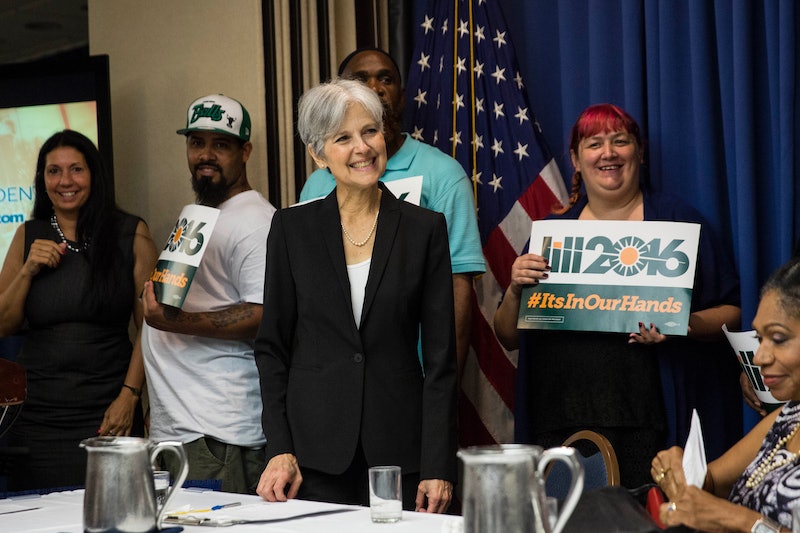 Jill Stein recently invited Vermont Sen. Bernie Sanders to take over her presidential bid on the Green Party ticket. In an email to her supporters, she also announced that she would take to the streets in Philadelphia, Pennsylvania, during the Democratic National Convention. But are these initiatives enough to create space for the Green Party on a national stage that has long remained faithful to a rigid two-party system?

Ralph Nader's 2000 presidential bid on the Green Party ticket made headlines because many people were convinced that he was a third-party spoiler who handed the election to George W. Bush, though Nader has disputed that claim. But even that controversial election did not enable the Green Party to completely disrupt the two-party system in subsequent elections.

Now, however, Sanders' candidacy has presented the Green Party with a unique opportunity. Sanders launched a grassroots campaign within a major party, despite being an independent. It is now apparent that while he and his supporters have managed to make a few progressive changes to the Democratic Party's official platform, former Secretary of State Hillary Clinton is likely to win the party's nomination. So Sanders has two choices: He can either endorse Clinton, or he can take his call for revolution outside the two-party system.

"If he continues to declare his full faith in the Democratic Party, it will leave many of his supporters very disappointed," Stein recently told The Guardian. "That political movement is going to go on — it isn't going to bury itself in the graveyard alongside Hillary Clinton."

She's not wrong. During his campaign, Sanders has mobilized a lot of people — particularly young people — around a number of progressive issues. For him to eventually give in and support the Democrats' likely nomination of Clinton, would contradict much of what he has been fighting for. Sanders has been facing a great deal of pressure to drop out of the race and endorse Clinton, but his campaign has never just been about transforming the Democratic Party; it has been about creating real, systemic change, and as long as the existence of a two-party system goes unchallenged, a status quo that prevents such change will be preserved.

This could, therefore, be an incredibly important moment for the Green Party — and for the Libertarians, who have also recently gained traction. Polls from the end of June showed Stein at 6 percent and Libertarian candidate Gary Johnson at 10 percent. Both Clinton and Donald Trump polled at less than 40 percent in a four-way race, and their favorability ratings are low. While many argue that Trump's presence in this election makes it a terrible time for a third-party candidate to run, it actually seems like the perfect opportunity for the Green Party, especially to harness the leftist energy that Sanders has encouraged, and to become a major player in current and future elections.

What remains to be seen is whether or not Stein and the Green Party can carve out enough space for themselves in a political system that has long favored two major parties. If Sanders takes up Stein's offer, or at the very least collaborates with her in order to proceed with his proposed political revolution, the Green Party is sure to make headlines. Although Sanders has run a fairly grassroots campaign, he has also accumulated a sizable mainstream following, and if anyone had a sufficient amount of influence to ensure that the Green Party would appear in general election debates and receive enough federal funding for the next election cycle, it would be him.

If the Green Party and the Libertarian Party both successfully break into this year's general election, they could help create a radical shift toward a multi-party political system. Whether or not such a system would be sustainable given current policies in place is unclear, but it is definitely worth a shot if we want to add more nuance — and more perspectives — to the way this country's government functions.