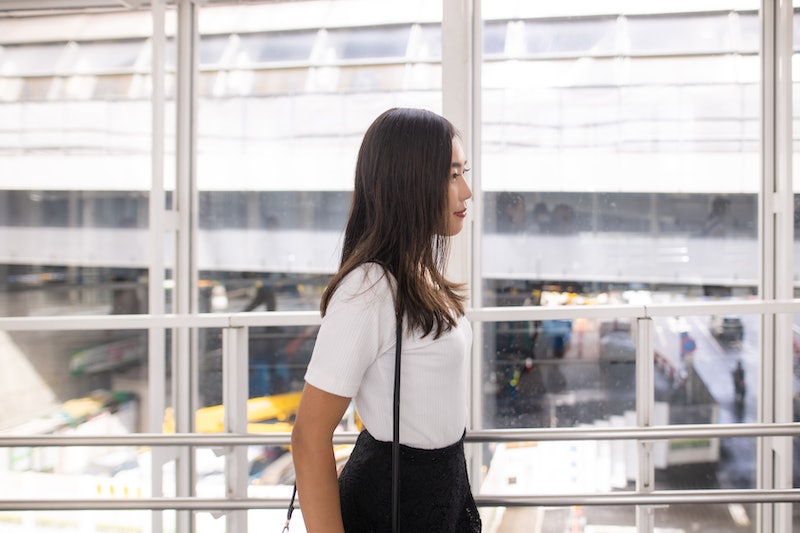 The worst thing about anxiety is how it can make you feel like everything is crashing down on you at once. People try to tell you, "Take one thing at a time," but that there's no way you could possibly compartmentalize things in a level-headed way when you're positively overwhelmed. Anxiety also convinces you that there's no escape, so you end up wallowing in your worries for hours, ruminating over the smallest things that feel anything but small.

Bustle spoke with Jodi Aman, a psychotherapist with over 20 years of experience and the author of You 1 Anxiety 0, who says you don't have to make any major changes in order to reduce your anxiety levels in this very moment of heightened anxiety. According to Aman, it actually doesn't take much to start to turn things around. If you can do one thing right now to reduce your anxiety, Aman recommends, "Take a walk, even if it's pacing." It may sound mundane and too simple to have any effect on your worrying mind, but there's a great deal of research out there proving how beneficial a short stroll can be for people with mental illness. Whatever you might be thinking, just don't knock it 'till you've tried it.

Here are five ways taking a brief walk can reduce your anxiety.

1. It Positively Alters Your Brain Chemistry

"Move your body somehow, because this changes brain chemistry to calm you," Aman tells Bustle. There's plenty of research to prove this. One study in particular surveyed 135 volunteers over the course of 16 weeks and found that the group of folks who walked regularly and kept their minds in a meditative practice (which was as simple as focusing on your own footsteps) showed the most noticeable results. They saw a huge drop in stress, much more than the participants who didn't take part in regular walking sessions.

Previous research has also shown that moderate walking releases a significant amount of endorphins into your brain, which reduces anxiety, smooths out your moods, and reduces negative feelings about yourself. It can have the same effect on your brain as a mild tranquilizer (side effects aside, I'm sure).

2. It Sharpens Your Mind

If you've ever struggled with anxiety, you're probably familiar with the muddled, soupy feeling that comes with a bout of anxious thoughts. Your brain gets swampy and you can't really think straight. That's when walking can come in handy. It improves cognitive function, helps you concentrate better, and gives you the boost of energy you need to go on with your day. All it takes is five minutes of aerobic movement to feel the anti-anxiety benefits.

If nothing else, putting down what's in front of you to take a walk outside will clear out the cobwebs in your mind. It'll provide you with a healthy distraction, reminding you that there are many things going in the world other than what you're feeling.

3. Being In Nature Eases Anxiety And Depression

Have you ever hiked up a mountain and nearly found yourself in tears at the very top? There's something about nature that elicits certain emotions within us, even when we're least expecting it. Stanford scientists published a study in the journal Proceedings of the National Academy of Sciences showing that people who walked outside in nature rather than in a bustling urban setting experienced reduced levels of anxiety. They also saw less action in their subgenual prefrontal cortex, the part of the brain responsible for rumination, which researchers defined as “a maladaptive pattern of self-referential thought that is associated with heightened risk for depression and other mental illnesses."

Aman confirms this, saying that a short walk outside can help lessen your anxiety triggers and encourage you to make better choices throughout your day. So get out into the sunshine and get moving, because if you allow yourself to stew in anxious thoughts in a stuffy building, you'll only fall into a deeper hole of worry or depression.

4. It Helps You Breathe Better

One of the first physical side effects of anxiety is shortness of breath. This is also one of the primary signs that there's a panic attack on the way; your chest tightens up and you feel like you can't get enough oxygen into your system. You might think not enough oxygen is the culprit, but what's actually happening is that you're releasing too much carbon dioxide. By taking a brisk walk around the park, though, your body will automatically start to produce more carbon dioxide, helping you breathe slower and deeper. It can be likened to the intentional, rhythmic breathing you might practice in a yoga class.

5. It Gives You Some Alone Time

At any given moment of the day your attention is torn between a million different things. You're answering your email, texting family, and chatting with your friend about where to eat dinner tonight. Anxiety loves to knock at your door when you've got a lot on your plate, which could leave you feeling crappy at the most inopportune moments. Grant yourself a walking break, the kind where you take off without a phone for 20 whole minutes. You won't have to answer to anyone but yourself.

Aman encourages people with anxiety to recite a small mantra to themselves as they're walking. Things like "It's going to be OK," "This will pass," and "I can do this" can make your trip outside all the more effective. Remember, the whole point of walking is to treat yourself and chill out, so there's no wrong way to get the job done.