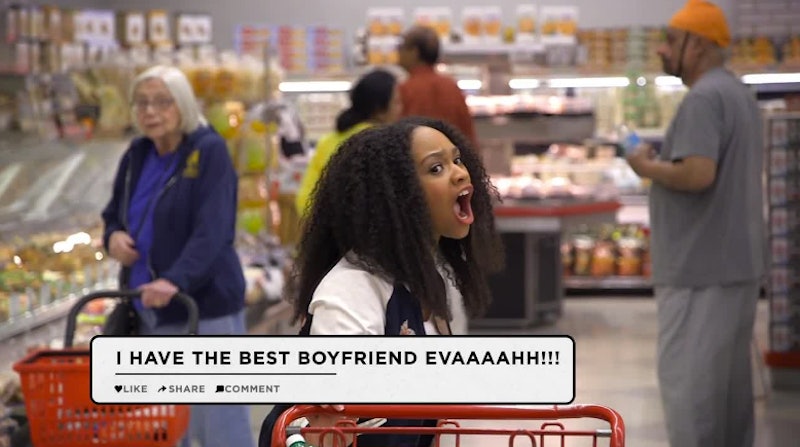 Social media has changed the way we interact with other people, but some things are better said online. There's a reason we tweet certain things and use certain phrases on Facebook — they would sound ridiculous coming out of our mouths! The "Talking IRL Like We Talk Online" sketch from MTV's Guy Code vs. Girl Code explores this very concept with hilarious results.

What would happen if you announced your relationship status to a grocery store, or a hostess at a restaurant? Does the general public really need to look at your baby every single day? On one hand, I love the way that Twitter and Facebook allow us to exude confidence without fear of ridicule. It's important to be able to feel good about yourself! However, some things are definitely best kept online with a "mute" option for your friends and followers.

Don't worry. While the new show's title makes it seem like it's pitting women against men, there's nothing particularly gendered about the examples they use in the sketch. Let's face it, we're all guilty of being ridiculous when it comes to talking online. We tend to be a lot sillier, a lot more attention-grabbing, and weirdly sometimes a lot more formal online. Watch the clip below, and get pumped for the new season of Guy Code vs. Girl Code!