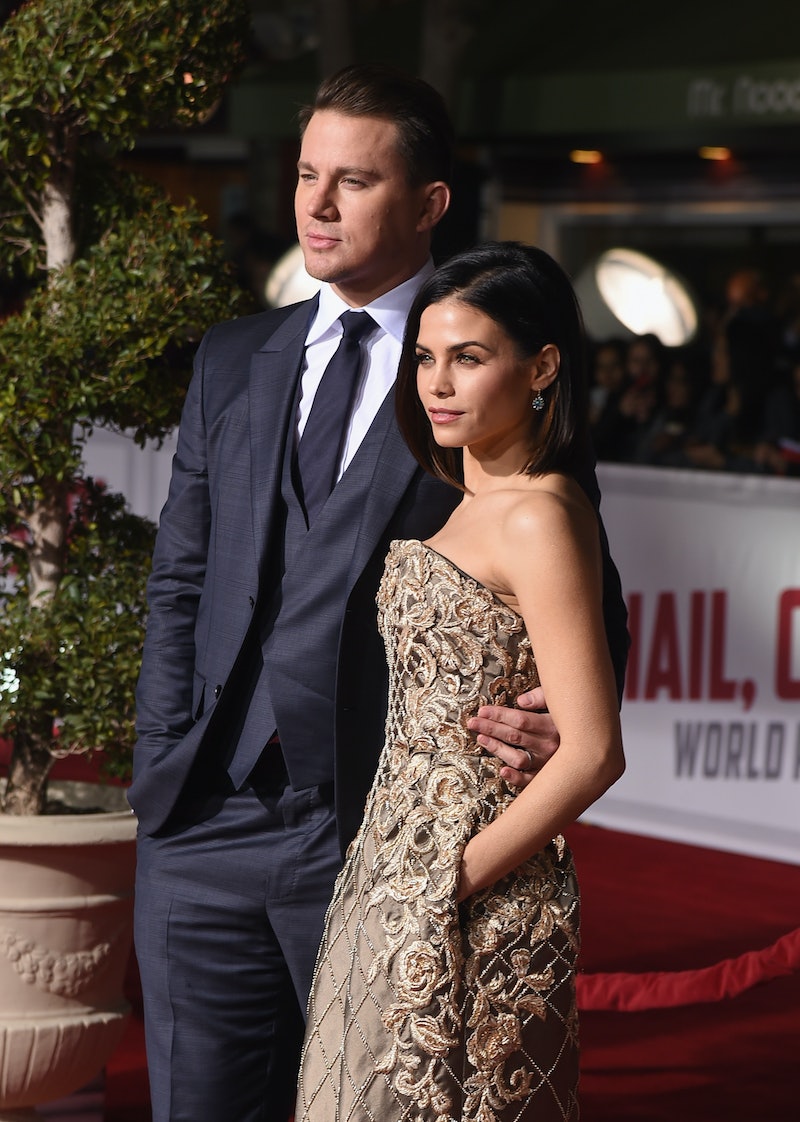 Is it harder to believe that Channing Tatum and Jenna Dewan have been together for 11 years, or that they've only been together for that long? They seem so perfect for each other that it's like they've been together forever, so it's not surprising that they've hit yet another milestone in their relationship. This week, Tatum and Dewan celebrated their seventh wedding anniversary, and in the most adorable way possible: Through precious Instagram tributes to each other that will bring a tear to the eye of anyone whose heart is not made of stone. They may be an old married couple, but the spark between them definitely isn't going anywhere.

And personally, Dewan's message to Tatum was my favorite. She shared a pic of a couple of photo strips of the two of them, kissing, smiling, and generally being silly together, with the very simple caption, "7 years," since the pictures pretty much say it all. After more than a decade together (plus a daughter, Everly), it's clear that these two are in a stable, loving partnership — even in a world where it seems like celebrity marriages and relationships crumble all the time. And it's a good thing, too, because if they ever broke up, would there even be a reason to believe in love anymore?

Tatum's message, which featured a photo of Dewan from behind, was equally as sweet:

And their anniversary messages aren't the first time Tatum and Dewan have used Instagram and Twitter to express their love for each other. If you're not following them, you need to be, and here are just a few reasons why.

When Tatum Was Impressed By Dewan's Mothering Skills

That caption though! It's so sweet to see how Tatum's love for Dewan has grown since they welcomed their daughter three years ago — and how much he appreciates her for who she is, too.

When Tatum Supported Her So You Think You Can Dance Performance

If only we could all find someone to love us that much after we're dead on the floor from too much physical activity.

And When She Supported Him In 22 Jump Street

They both may have crazy careers, but it's obvious they're each other's biggest fans.

When Tatum Thanked Dewan For Basically Changing His Life

And it's a good thing she kept him on that path, because where would the world be without Magic Mike?

When He Called Her A Superhero

The only thing cuter than Dewan and Tatum are Tatum and Everly.

When Dewan Celebrated Tatum For His Birthday

Could you imagine a camping trip with these two? It would be so much fun!

If you ask me, they're both magical creatures, and I hope they stay married forever. Long live the Dewan-Tatums!