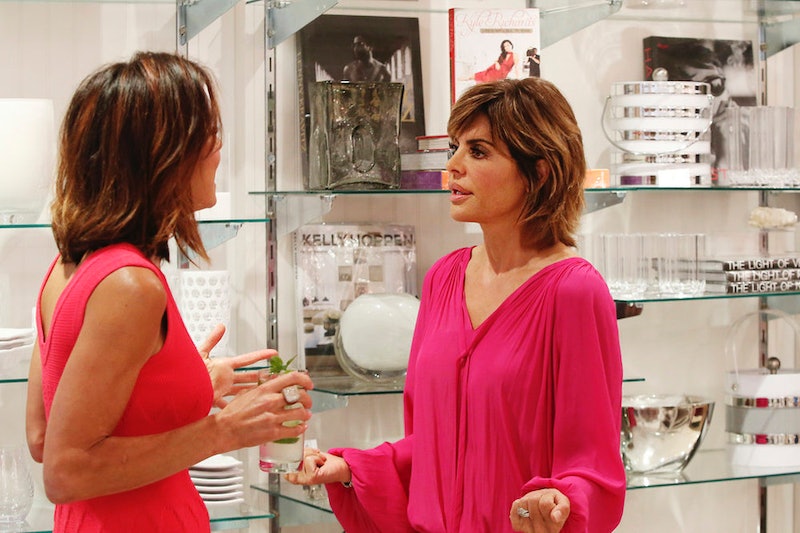 Cast salaries can vary wildly — newcomers can make very little compared to older, more established cast members. The most recent number I could find for Lisa Rinna comes from 2014. According to RadarOnline, the Real Housewives Of Beverly Hills cast allegedly pushed for a big salary bump in 2014. RadarOnline reported that Lisa Vanderpump, Kyle Richards, and Yolanda Hadid netted an alleged $500,000 for a season, and Kim Richards and Lisa Rinna were reportedly pulling in $450,000. So, allegedly almost a half a million dollars a season for Lisa Rinna, who was at that point a newbie still. I’m sure she’s been able to negotiate herself up from two years ago (she’s very popular), but I couldn’t find any facts and figures there. Bustle reached out to Bravo for comment on those figures but has not yet received a reply.

According to CelebrityNetWorth.com, Lisa is worth a pretty penny not even counting her work on Real Housewives Of Beverly Hills — the website reports that Lisa is worth approximately $8 million, earned over her time spent acting on shows like Days Of Our Lives, Melrose Place, Veronica Mars, Celebrity Apprentice, Dancing With The Stars, and her own show with husband Harry Hamlin, Harry Loves Lisa. Lisa also owns her own clothing boutique, Belle Grey, and she’s posed for Playboy before, so you know she brought in some income from that.

Hamlin is no slouch either. CelebrityNetWorth.com reports that he’s worth about $5.5 million, which to me seems kind of low. Hamlin starred in big shows like L.A. Law, The Outer Limits, and Remember WENN, and he’s done a ton of voice work. Most recently, he was on Mad Men. Still, it’s obvious that these two aren’t hurting for money — they’re worth reportedly $15 million between the two of them.

Despite all of this cash running around, Lisa seems refreshingly down to earth. All of the women on Real Housewives Of Beverly Hills have this ostentatious wealth, but Lisa is always the voice of reason. The way she behaved last season was a little crazy, but Lisa came back and basically held herself accountable for her behavior. When was the last time that happened on a Real Housewives reunion of any show? In a blog on BravoTV.com, Lisa wrote, “This season has been a tough one. I've said some things that really pissed people off… Let's talk about accountability.” Let’s, Lisa! I’ll watch you talk until you don’t want to be on Real Housewives anymore.

More like this
'RHOSLC’s Newest Cast Member Has Tried To Become A Housewife Before
By Jake Viswanath
Here’s What Went Down Between Romeo, Jill, & Kira Before 'Bachelor In Paradise'
By Grace Wehniainen
Why Did Lace's Fake Her Birthday On 'Bachelor In Paradise'?
By Kadin Burnett
‘RHOSLC’ Star Jen Shah’s Arrest & Legal Drama, Explained
By Brad Witter and Jake Viswanath
Get Even More From Bustle — Sign Up For The Newsletter