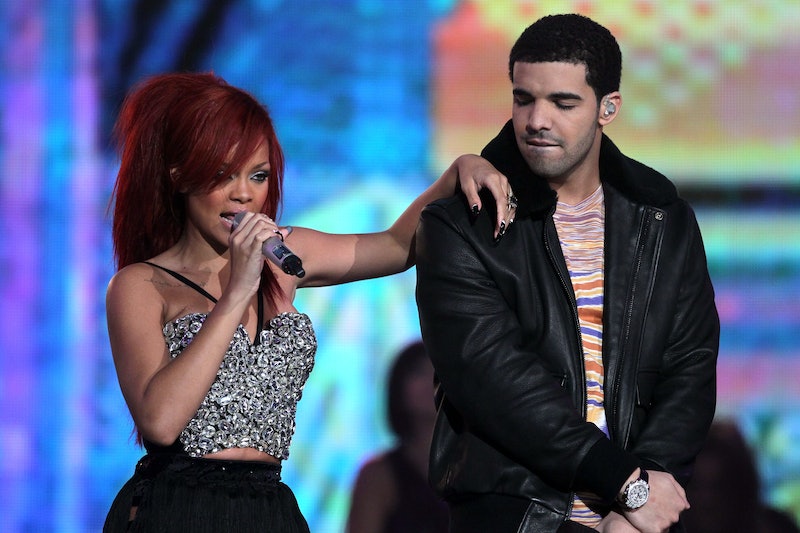 Rumors are once again heating up about them dating, but I have always maintained that Drake and Rihanna were perfect for one another. I mean, not only do their voices mesh with melodic ease, but so do the rest of their lives. Just look at their names: They both go by their middle ones, and their collaborative couple name is Drake's real first name just spelled differently, ahem, "Aubrih." That's fate, people. Plus, there's the whole chemistry thing — they are on fire whenever they're around each other. I know what you're thinking, what am I trying to get at here? Well, I'll stop beating around the bush and ask, did Drake and Rihanna really date before? Because I have a sneaking suspicion that they've tried at a relationship in the past.

Regardless of whether this currently rumored relationship is their first go at it or not, too much is on their side relationship-wise for this romance to never be realized. It would be a monumental love injustice. Like, have you seen them together? Whether they were official or not, they've been giving famous couples a run for their money for years now, and did so without all of the showiness. It's what makes them so easy to root for, their interactions seem so genuine in a world of carefully constructed public images. And, boy, do people root for them.

While the singers haven't confirmed they're dating now, they have been spotted together often recently, which has set off a flurry of rumors. And when it comes to their dating past, for all intents and purposes, Drake and Rihanna have dated before — or at least had some type of romantic relationship. And, believe it or not, that news is firsthand information.

In 2011, Elle interviewed Drake and asked him about his song "Fireworks," which was apparently about being Rihanna's "rebound guy." To which he responded, "Not necessarily the rebound guy." Elle asked if Rihanna hurt him. Drake answered candidly and thoroughly, and it's a lot to unpack. The Degrassi alum said to the magazine,

"At the time it hurt, but she didn't mean to. I'll never put that on her. I was hurt because I started to slowly realize what it was. I guess I thought it was more. That was the first girl with any fame that paid me any mind. You spend days reading about this person in the magazines. All of a sudden you have this number-one song and you're at some birthday party and there she is. And you're just some naive kid from Toronto staying in some sh*tty-ass hotel who got invited to this party on a whim. That's just how it happened."

Ah, to go back five years ago to let little Jimmy Brooks know that it was all going to be OK. Actually, whether he knew it or not, he himself proved in that interview that things weren't really over for them. This seemingly amicable breakup — or whatever it was, since it sounds like Drake "thought it was more" than she did — and his cool, calm, and collected assessment of the situation, was the perfect, unassuming set up for them to have a second chance when they both were in a better place.

Throughout those five years in between that interview and now, rumors abounded. For example, in 2014, HollywoodLife claimed that Drake was referring to Rihanna as his girlfriend at the time. Another report, also in 2014, from TMZ, claimed that sources said that Drake and Rihanna were "exclusive." The main take away from all of the continual and relentless talk is that fans held onto the belief that no matter what, they'd end up together eventually. And it looks like they may have been correct.

When you know, you know.