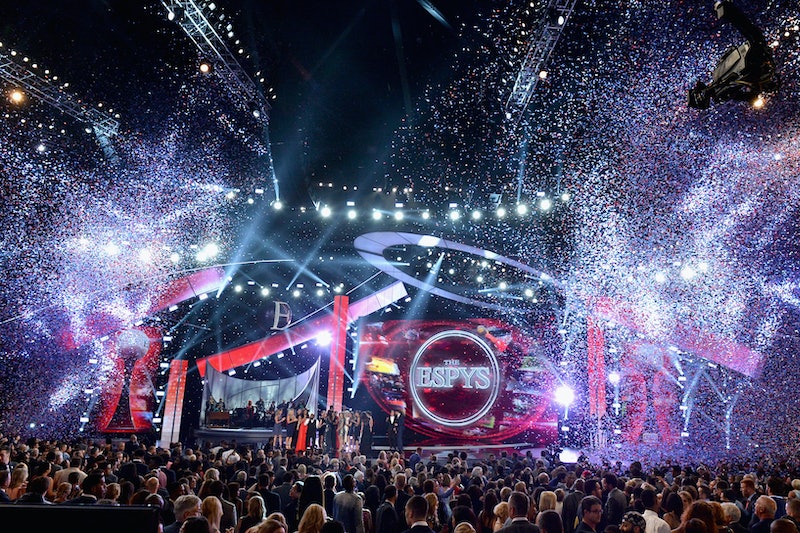 Sports fans have plenty of opportunities to watch their chosen teams shine, but they don’t have one event that they can get all dressed up for. Enter the ESPY Awards — when Hollywood and sports combine to form one room full of beautiful and beautifully fit people that get awards, watch long sports montages, and watch John Cena make jokes (he’s this year’s host). Don’t have cable? Luckily, you can stream the 2016 ESPYs online pretty easily.

This year’s ESPY Awards are shaping up to be pretty serious — in a good way. Last year, Caitlyn Jenner accepted the Arthur Ashe Courage Award, and, even though there was some controversy around that decision, I guess ESPN vowed to do their best to top that moment. This year, according to ESPN, Justin Timberlake will present the Icon Award to Kobe Bryant, Abby Wambach, and Peyton Manning; Paraswimmer U.S. Army Sgt. Elizabeth Marks will receive the Pat Tillman Award for Service; and TNT sideline reporter Craig Sager, fresh from a battle with cancer, is being honored with the Jimmy V. Perseverance Award. It’s nice that the ESPYs honor athletes and people that don’t always have their names splashed across every front page. They make not all make millions, but they do make a difference, and the fact that the ESPYs feature that is important.

And what of the famous people nominated for the ESPY Awards? Will Best Male Athlete go to Steph Curry? Or LeBron James? What about Best Upset? Will Holly Holm’s knockout of Rhonda Rousey top everything else in that category? That’s what I would tend to think, but I watch, oh, four sporting events a year. No, the ESPY Awards aren’t meant for me, but I do find them entertaining nonetheless.

But, back to the issue at hand — What if you don’t have a television or cable and you want to watch the 2016 ESPY Awards? Here are your options.

ESPN has made watching their network on mobile devices particularly friendly in recent years. All you have to do is download their app, WatchESPN, and you’ll be able to watch whatever you want, including the ESPY Awards. The only problem is that you’ll probably need a cable login to do that.

Sling is $20 a month, and you can basically watch whatever you want on it. This includes ESPN, which airs the ESPYs, but it also includes channels like USA, TNT, HBO, and more, so it could be a good time to invest in this life-changing, “I-don’t-want-cable-but-need-TV” service.

Um, duh, it’s a different channel, I know, but ABC and ESPN are both owned by Disney, and so ESPN is double broadcasting the 2016 ESPY Awards on ABC, too. This means you can stream the ESPY Awards using the ABC app, though the caveat is the same — you’ll probably need a cable login.

Are you ready to watch the ESPY Awards? No matter how you do it, don't miss it — it's sure to be a great show.