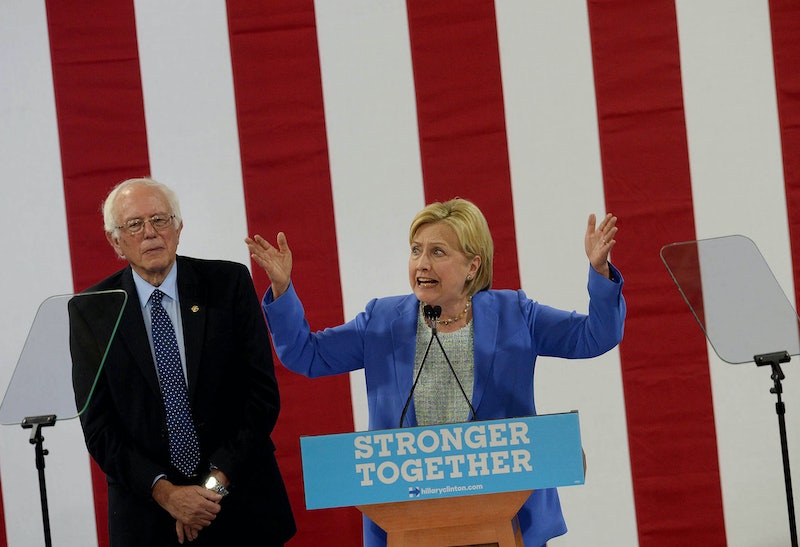 In many of our minds, the Democratic primary has been over since June, when Hillary Clinton secured the needed number of pledged delegates to clinch the party's nomination for president. But her chief opponent in the race, Bernie Sanders, withheld his endorsement of her until Tuesday, more than a month after the final nail in the coffin of his campaign that was the June 7 primaries. Why is Sanders endorsing Clinton now?

The clear reason he waited until mid-July — despite the fact that he's been saying he would endorse the eventual nominee since the beginning of his campaign — is that he was focused on getting more progressive language into the official Democratic Party platform. The Democratic platform committee, which was responsible for drafting a platform to present to delegates at the convention, held its final meeting on July 8 and 9 in Orlando. Not throwing his weight behind Clinton during the drafting process allowed Sanders to maintain some leverage and put pressure on the committee to insert his ideas into the platform. And in many ways, it worked. Sanders' policy director, Warren Gunnels, told NBC News that Sanders got "at least 80 percent" of what he wanted.

Sanders and his delegates saw substantial victories on the platform — a messaging document which doesn't bind politicians to its positions, but may have some influence — including support of a carbon tax, marijuana legalization, a $15-an-hour minimum wage, abolishing the death penalty, and getting the Department of Justice involved in investigations of suspicious police-related deaths. However, the committee voted down amendments for opposing the Trans-Pacific Partnership, supporting a fracking ban, and criticizing Israel for settlements in the West Bank. These amendments can be brought up for debate again at the Democratic National Convention, where delegates will vote on adopting the platform.

So it's pretty clear why Sanders waited until July to endorse Clinton. But why didn't he wait until after the convention? He may have endorsed her now in an effort to get his diehard supporters over into the Clinton camp. Some are planning to protest the Democratic National Convention to try to convince delegates to nominate Sanders, on the premise that the election was "rigged" against him and that Clinton "stole" the nomination. In his endorsement, Sanders emphasized that he lost, plain and simple:

It could be that Sanders wants his supporters to let go of the idea that Clinton didn't honestly win the primaries. If they think the system is "rigged" and the Democratic Party is fundamentally corrupt, they won't likely participate going forward. Supporting Clinton before the convention may be his way of trying to convince his supporters to have faith in the party.

Sanders waited to endorse Clinton until the platform was drafted in order to have more sway over the process, but not until the convention, likely in an effort to get his supporters behind Clinton.