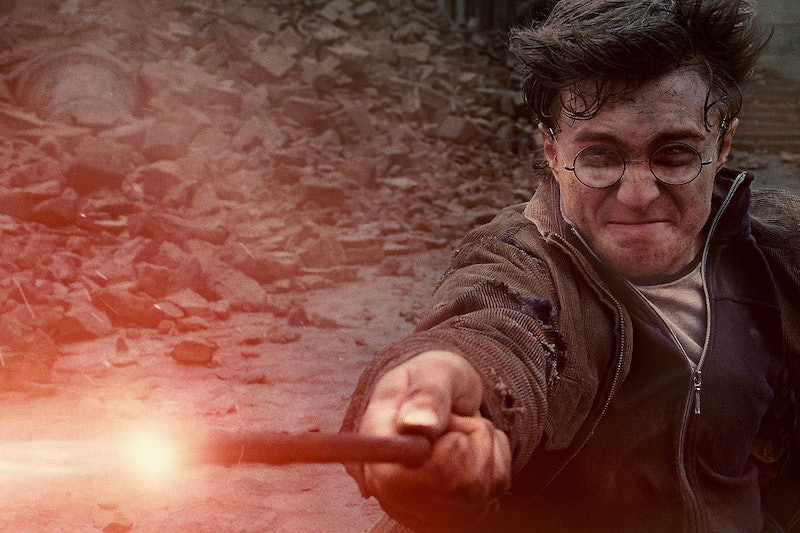 Get ready Harry Potter fans because you're in for a huge bombshell. It's been a huge six months for the Harry Potter series and franchise with J.K. Rowling announcing a series of spin-off films and her big, controversial reveal that Harry and Hermione were supposed to end up together. But this fan's theory about an alternate Harry Potter series ending will really knock you off your broomstick. Harry Potter, "The Boy Who Lived," might be immortal. Wrap your head around that one.

Some brilliant Potter fan has come up with an alternate interpretation of the prophecy that led Harry Potter to face Voldemort in the epic, final battle at Hogwarts at the end of Harry Potter and the Deathly Hallows. With a very long infographic, the fan redefines what being "The Boy Who Lived" means and suggests a very different, and possibly more satisfying, ending to the beloved series. The part of prophecy the fan hones in on, dictates:

Either must die at the hand of the other, for neither can live while the other survives.

So what's the fan's proposal — What if "The Boy Who Lived," in combination with the first part of that bit of prophecy, meant that Harry and Voldemort could only be killed by the other. So, when Harry killed Voldemort in the final battle of the series, he killed the only being that could have killed him. Thus, MAKING HARRY POTTER IMMORTAL.

Imagine that ending — rather than the silly flash-forward of Harry and friends/foes putting their children on the Hogwarts Express? It'd have made for a much darker conclusion to the series, as Harry would have to watch all of his friends die, but we can't deny that this interpretation would have made things very interesting. Harry would have succeeded, accidentally, in the one thing that Voldemort spent his entire life trying to achieve — immortality.

Now, we'd never contradict Rowling's decision of how to end the series because she's perfect in every way —but this is too good for our Potter-loving hearts to latch onto for a little while. Don't try to desperately find proof in this theory by furiously re-reading and re-watching the Potter series, this crafty fan assures that you won't find any because the theory was developed with non-canon support. Long live "The Boy Who Lived," right?