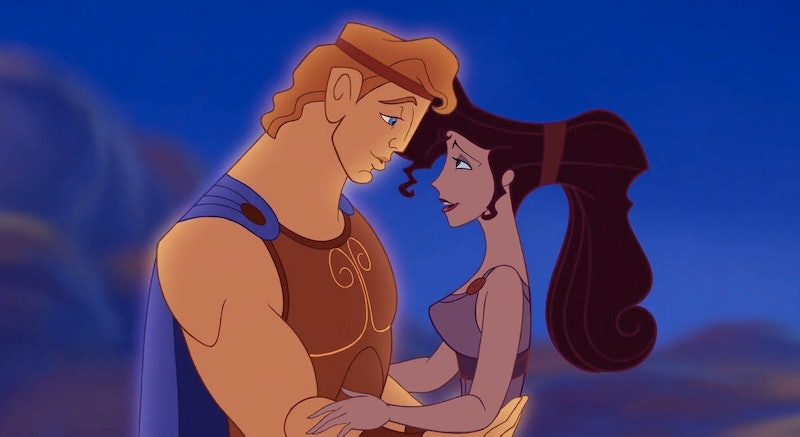 People hate on Disney movies day whether for legitimate reasons like sexism or historical inaccuracy or illegitimate reasons like finding them childish or unrealistic. But I will stand by Disney, even though my adult eye has become more discerning than my childhood one. I'm well are that there are some pretty terrible lessons to be learned from Disney movies. I'm not denying that at all. No one is telling you to behave like the characters in a Disney movie do, you guys. In fact, it's very important to simply remember these movies for what they really are: pure entertainment.

Sometimes I can't help but wonder why our childhood was filled with this sort of content, which gave us some pretty unrealistic expectations about love and how relationships worked. But that's where the separation of self from Disney must come into play. Disney movies have grown as we have grown, and, to their credit, recent animated films to enter into Disney canon feature a lot more of couples actually talking to one another before they become couple. Still, if you look back upon their history, there are some definite terrible lessons we learned from Disney that can't be denied no matter how much you love Sleeping Beauty.

1. There Is Such A Thing As "Happy Ever After"

Our lead couple kisses, their trusty animal/magical sidekick makes a joke, end scene. But that's not the way real relationships work. It's not like, all of a sudden on your wedding day, all the problems you have with the person you have chosen go away. Partnership is a constant battle.

3. If He Doesn't Like You When You're Right In Front Of Him, You Just Need To Change Yourself

If Prince Charming has you and your awesomeness in front of him, and he's still pining for the singing voice of another person, he's maybe not that charming. Blow him off for someone who's always thought you were cool.

My stomach still grumbles when I think about the bread Aladdin munches on when he's a street rat. But real food doesn't look that perfect, and you know what? That's OK. Food doesn't have to look perfect; it just needs to hook you up with some nutrients.

5. Your Parents Are Wrong & Don't Understand You

OK, so King Triton was wrong when he was telling Ariel that humans were bad news, and Mulan's parents were wrong about her destiny, and Marlin was wrong about how fast Nemo could swim with his wee little fin. But your parents in real life are older and wiser than you, so, chances are, they know what the heck they're talking about.

6. Your Extended Family Is Even Worse Than Your Real Family

We've got an evil stepfamily in Cinderella, an almost step-mother in the Parent Trap, an evil witch step-mother in Snow White, and even traitorous uncles in Hercules and The Lion King. Basically, anyone outside of your immediate family is trying to destroy you in the wonderful world of Disney.

Extra points if he won't let you leave. Because, no matter what, you can fix him with good books, fine dining tips, and snowball fights. Or not.

Everybody just up and leaves when things get tough. Alice is boring in everyday life? Guess she'll just hop into whatever random hole pops up. Elsa's experiencing some issues with controlling her powers? Time to start an ice kingdom in the mountains. For some reason, it always seems to work for them.

9. It's Totally Cool To Own Wild Animals

Sure, everyone's got to have a sidekick. That's how Disney movies work. But it is wildly unethical to own a creature that should be running around the jungle, not chilling in a palace. Can't everybody just get dogs? Sop being so fancy and just head to an animal shelter like the rest of us.

How much easier would the world be if people who were trying to hurt you always looked like someone who is trying to hurt you? Sadly sometimes the nicest dressed, most sweet-faced people are the villains in the real world.

11. Its A-OK To Start Your Relationship With A Lie

Sometimes, to get a significant other, you have to feed them total lies to make them like you. It's totally acceptable to pretend you have a lot of money and are a prince, and then proceed to have a happy ending. In the real world, it takes a lot more communication to sort it out than just one happy ending kiss.

12. Your Body Should Be Perfectly Proportionate

All the main characters in Disney movies are so fit. No one's left boob is bigger than their right boob, no one's got scars from the one zit that got away, and everybody's got the most on-point muscle ratio. Unfortunately, the real world isn't so. Quasimodo's the only main character who's not conventional-looking, and he doesn't even get to find true love until The Hunchback of Notre Dame II.

A kiss, or dance, or perhaps even first sight should clue you in immediately. Normal people actually have to put more time into the whole "falling in love" thing, but, to be fair, Disney does only have about 96 minutes to make it happen. I give them a little credit for making it convincing despite that.

Hopefully, when you were a young whippersnapper getting caught up on your Disney trivia by obsessively watching movies over and over, you knew even then that it was simply entertainment. The life lessons Disney movies taught us are often very inadvisable for the young mind, but the movies themselves are timeless classics that everyone can enjoy. Just be sure to be critical about what you're watching, that's all.