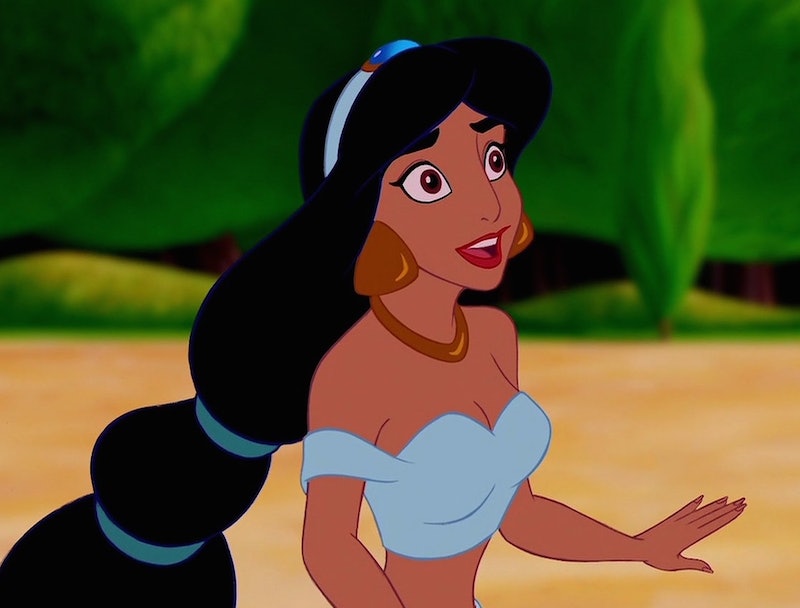 Even as an adult feminist, Disney princesses have somehow never lost their allure for me. Since I used to run on the treadmill listening to specifically Disney princesses' songs (weird, I know), I subscribe to the idea that your favorite Disney princess says a lot about you. Considering that your favorite animated princess is usually the character you relate to the most — or aspire to relate to the most — the characteristics that she has are telling about the person you are or want to be.

While you may have unintentionally chosen your favorite princess strictly because of her hair, there's usually something about her personality or story that draws you to that particular, um, drawing. Having a favorite Disney princess is as natural as belting out Pocahontas songs when you're enjoying the great outdoors (please tell me that's not just me). And although I'm all about recognizing problematic plots that often occur in Disney's portrayal of female characters, there's no reason to be ashamed about your love of Disney princesses — even if your favorite is a more classic princess. Yes, Snow White isn't as groundbreaking as Merida, but there's still plenty to love about both of these female, fictional characters.

Ariel From The Little Mermaid

Although you may have led a charmed childhood, there's something about you that just wants (hmm, how should I say this?) more. It's time for you to book that next vacation, move to a new city, or change jobs. Or maybe you just really like Ariel's beautiful red hair. In that case, why not dye your own hair her vibrant shade? (I've done it unintentionally.) Either way, you've got guts and you shouldn't hold back — just don't make any major life decisions solely based on a crush or significant other.

You understand that Aurora typically gets a bum rap when it comes to the world of Disney princesses and that's she actually more worthy of admiration than many people give her credit for. Yes, she has to be literally saved from slumber by Prince Phillip, but Aurora is a caring and inquisitive person. Even when the odds are stacked against you — like a witch has been trying to take you down since childhood — you know you can handle the situation with grace and confidence, which is pretty astounding. Plus, you really rock both casual (you look great barefoot!) and formal looks.

Belle From Beauty & The Beast

You can't really go wrong with liking the intelligent and beautiful Belle from Beauty and the Beast. While she's patient, she's not a doormat and though she looks for the good inside of people, she has no tolerance for egotistical people with no self-awareness — yeah Gaston, I'm talking about you. Yet, why she is your favorite is because while she may appear to be only a bookworm (no problem with that), she wants to experience the adventures she reads about in books and has the courage to actually go out and do it. So channel your inner Belle and book your next adventure in the great wide somewhere.

If Cinderella is your number one princess, you might have a bit of a complex about being underappreciated. While you're a kind and hardworking person, perhaps you've been overlooked at your career or in relationships. Although someday someone might recognize you for all the good you have done, you unfortunately can't expect a fairy godmother to make that happen for you. Time to speak up for yourself and your merits, because just like Cinderella — you're worth it.

You're feisty and while that can sometimes get you in trouble, for the most part, it just means that people are wooed by your charismatic personality. You've got some resentment in you for how you've been treated either by your family or society, but that anger only fuels you to go out and subvert expectations in your professional and personal life. Speaking of your personal life, you probably also have a really great pet that's utterly devoted to you. (Rajah forever!)

You could be on the younger side if Merida is your favorite Disney princess or you just understand and have experienced firsthand the universal truth that most women have complicated relationships with their mothers. Regardless, you're stubborn to a fault, but that's mostly because you have a clear sense of what you want out of your life. You don't like people telling you what to do and while you're a tough nut to crack, that's what makes you so simultaneously frustrating and lovable — and you wouldn't want to be any other way. Now, once you come back from hanging out in the woods, call your mom.

You have no time for conventional views of women. You're going to do what needs to be done (like defeating the Huns!) no matter what people think or say about you — you're just that awesome. While you may feel clumsy when forced to dress up, you're actually pretty comfortable in your own skin once you figure out exactly what you want. And beyond being pretty ingenious, you always have the best intentions.

Although you could be called serious, a better word to describe you is passionate since you have a fun-loving and adventurous side to you too. You have a pretty strong moral compass (Pocahontas compass reference intentional) and you get really indignant when people don't respect the earth or discriminate against other people. You might come off as self–righteous sometimes, but the world really needs more people like you.

Maybe you were sheltered growing up, but while you've got an innocence about you that is easy to mock, it's actually quite lovable since you're so genuine. You're probably really efficient when it comes to your spare time — whether that means taking on a hobby or just being an excellent Netflix binge-watcher. However, that doesn't mean you don't have a place that you've dreamt of seeing in person for years and with your optimism and energy, you will get there.

You gotta have a thing for the classics if Snow White is your favorite princess. Although you might come across as unfathomably sweet, there's more to you than that. You aren't one to begrudge being put in a bad position and you'll always make the most out of your situation. Because of that spirit, you somehow always end up on top and while people may envy you because of that, no one (who's not an insane stepmother) can say you don't deserve it.

Tiana From The Princess & The Frog

You're the only true entrepreneur out of the bunch and you take pride in your work — even if it has nothing to do with the food industry like Tiana. You also have a healthy dose of skepticism that comes in handy when dating, but are outrageously devoted and generous to the people who have earned your friendship and affection. To top it all off, you're pretty impossible not to love and you don't even realize it.

While you'll probably never get to be a real-life princess (that might actually be a good thing when you come to think of it since the scrutiny is rough), through the Disney princesses, you are always able to feel special, beautiful, and loved — no matter who your favorite is.