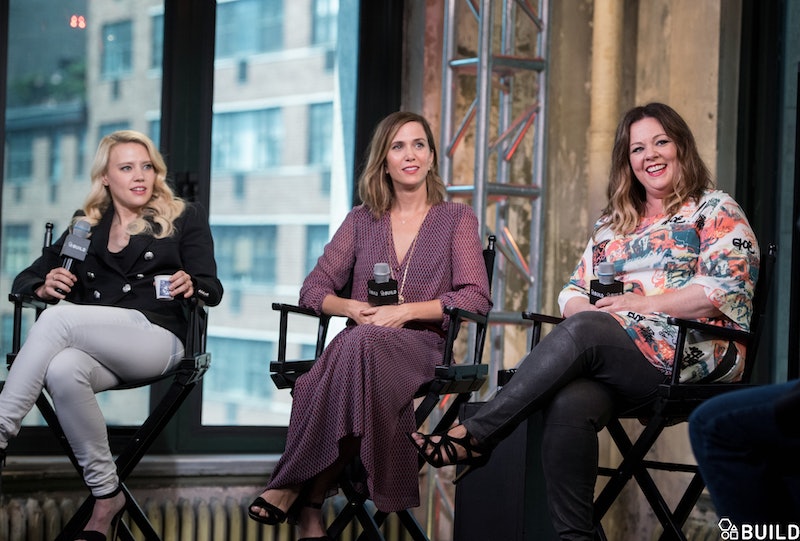 The ridiculous fun that the Ghostbusters cast had making the movie came at a price — mainly for the city of Boston, where the movie filmed late last year. And though, while speaking alongside his cast at the movie's recent AOL Build panel in New York, director Paul Feig thanked the locals for being so welcoming, star Kate McKinnon had a confession to make. "I left my mark on Boston," she said, going on on to tell a story about taking refuge by leaning her heavy proton pack on a "beautiful onyx sculpture" and then maneuvering around to ease the pressure on her back. When McKinnon got back on her feet, she saw that the metal of her pack had made "a big gash." "And I never told anyone about it until now," she joked. Feig quickly assured everyone watching the panel that McKinnon's accidental vandalism "buffed right out," but still, it's not hard to believe that the actor's action was just one of the many crazy things the Ghostbusters cast did while on set.

As it turns out, McKinnon's public art snafu was just one of the many one-set distractions that characterized the shoot. According to Melissa McCarthy, the movie almost didn't happen because the cast got along too well, and spent valuable set time just trying to make each other laugh. "It was kind of ridiculous. That Paul Feig had any footage to cobble together a film is shocking," McCarthy said at the panel. "Bad bits" and unsanctioned laughter apparently derailed many a take. "You'd just hear Paul going, 'Ladies, we're still shooting.'"

As luck would have it, Feig did have enough usable material for a final cut of the Ghostbusters reboot, which hits theaters July 15, but the cast is happy to have so many ridiculous takes. "If you go to work and you're like, 'Oh god, If I could just stop laughing so much, we'd get more done,'" McCarthy said, "if that's our big problem at work, I'll show up every day."

That statement echoes one McCarthy expressed to The Hollywood Reporter recently, in which the actor told the publication that she'd be delighted to do "102 more" Ghostbusters movies. Watching her and her collaborators detailing their filming exploits, it's easy to understand why doing these movies forever sounds so appealing. As panel moderator and Saturday Night Live writer Steve Higgins, who has a cameo in the film, pointed out, "rarely is a set that fun."

The slightly anarchic energy of the set helped to inspire some of the movie's best improvised moments. All four leading ladies are sketch pros, and Kristen Wiig made it known that Chris Hemsworth (who plays the Ghostbusters' receptionist) can riff with the best of them. "Some of the stuff you see in the beginning [of the movie] was his first day. And he was improvising, and we were crying," she recalled For his part, Feig was happy to sit back and unleash the raw hilarity of his actors. "When you have amazingly talented people like this, it just makes my job easy because it's like, let's try anything," Feig said. "And we'll exhaust it. The crew just wants to murder us at the end of every take."

The panel also touched on the irony of a movie conceived and executed with such a sense of joy and diversion creating such an overwhelming controversy. But Wiig preferred to talk about the audience eager to welcome a new generation of Ghostbusters: kids, who were already showing excitement for the film even while it was still in production. "It started to really fuel us. This is a really powerful thing that kids are responding," Wiig said. "A Ghostbuster can be anyone. It doesn't have to be any sort of sex or race or anything. It can be anyone. And it is exciting that we got to be able to fill those shoes—those suits—as women."