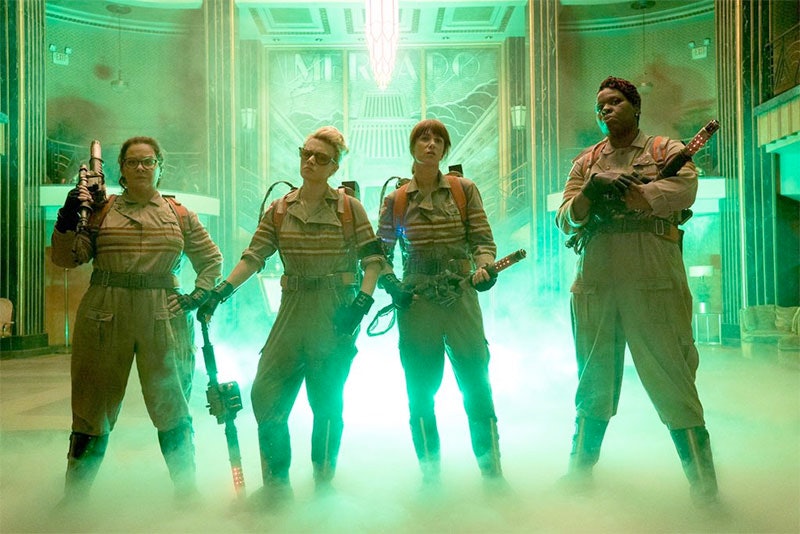 We knew the women starring in the new Ghostbusters weren't going to be afraid of no ghosts, but the first trailer for the all-female Ghostbusters reboot also reveals that these women are not just carbon copies of the original four guys. Sure, they've got similar looking suits, proton packs, and the Ecto-1, but, in this preview for the film, out July 15, we see this new version doesn't rely on nostalgia to get by. The trailer instead gives us a real introduction to these four women, played by Melissa McCarthy, Kristen Wiig, Kate McKinnon, and Leslie Jones, who will be saving New York City from the supernatural.

Since it was announced that Bridesmaids director Paul Feig was going to remake the beloved classic Ghostbusters with an all-female cast in 2014, he's had to deal with a lot of people's opinions. Some have been positive, excited by the idea of getting four extremely funny women together to update an already very funny movie. But there have been others who have expressed their distaste for a new Ghostbusters , often in very sexist ways, to let Feig know in no uncertain terms (and tweets) that this idea was just sacrilegious.

It's something the co-writer of the new film, Katie Dippold, told the crowd at a screening of the trailer, according to Entertainment Weekly. “I’m so happy for today, to have you guys applauding the trailer,” Dippold said. “This man [Feig] has put himself out there, getting the worst tweets. So to see this warm energy from the fans means a lot. He’s been thinking of you guys first and foremost.”

The focus on the fans is pretty clear from the trailer, which shows this Ghostbusters isn't afraid of a bit of nostalgia. Seconds in, we're all ready reminiscing about our favorite ghost hunters — Dr. Peter Venkman, Dr. Ray Stantz, Dr. Egon Spengler, and Winston Zeddemore — who saved New York City 30 years ago, but it also quickly makes it clear that was then and this is now. This is no remake, but a spiritual sequel that is all for celebrating what was so good about the original. The things you love about the first film are still there — hello, Slimer is back and Ray Parker Jr.'s theme has gotten a remix — but these new Ghostbusters are fighting a new baddie in a new way, and they just so happen to be women.

After months and months of hints about the new film, this trailer gives fans their first real glimpse of the film's actual footage. It gives us all a chance to meet these new characters who share some similarities with their predecessors. Wiig plays Erin Gilbert, a particle physicist who teaches at Columbia and still believes in ghosts at a time when everyone else thinks it's crazy, while McCarthy's Abby Yates, who has written the book on paranormal activity, has made it her true academic pursuit. McKinnon's Jillian Holtzman is an oddball engineer who's going to build all their gear to fight off ghosts, and Jones' Patty Tolan is an MTA worker whose knowledge of the city will give them a leg up on those who can fly through walls.

But Wiig isn't doing a Bill Murray impression. Instead, she's creating a brand new character for fans to be excited about, and that same idea follows for the other characters, too.

Best of all though, the movie looks funny. Like, really funny. There's tons of slime, which Wiig makes clear gets everywhere, even the hard to reach places. McCarthy is going subtle, which is something we don't often get to see from the comedian. There's some straight-faced one-liners, and McKinnon's wig gag is definitely a highlight. After seeing this trailer, fans should rest assured that no one's besmirching the Ghostbusters name. You know, breathe a sigh of relief and maybe stop harassing Paul Feig on Twitter.