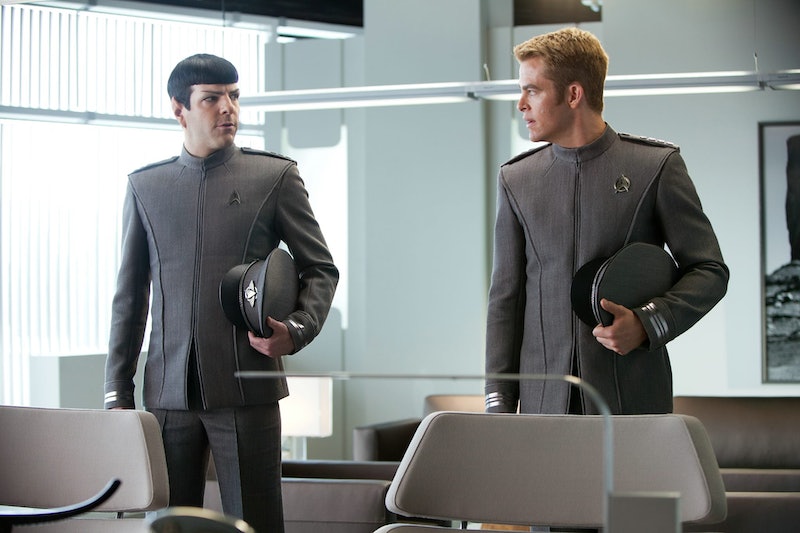 Movie franchises nowadays tend not to exceed more than one trilogy — even The Hunger Games, which had four movies, attempted to make the franchise more trilogy-esque with a Part 1 and Part 2. Now, with Star Trek Beyond completing a supposed Star Trek trilogy, fans are asking, will there be a fourth Star Trek film? It was reported last year by The Hollywood Reporter that both Zachary Quinto and Chris Pine (who star as Spock and Kirk, respectively) had signed on to a potential fourth film. Of course, a lot has happened since then, and it appears that, thankfully, Star Trek Beyond won't be the last Star Trek movie as we know it.

It was recently announced that a fourth Star Trek movie is currently being developed with stars Chris Pine and returning star Chris Hemsworth, who some fans might remember played Captain Kirk's father in the opening of 2009's Star Trek. "In the next installment of the epic space adventure, Chris Pine's Captain Kirk will cross paths with a man he never had a chance to meet, but whose legacy has haunted him since the day he was born: his father," reads the announcement from July 18. While Hemsworth's potential involvement in a fourth Star Trek film is surprising, the announcement of the movie itself is not.

In many ways, Star Trek Beyond marks a sort of rebirth for the Star Trek franchise. For one thing, it's the first film in the series without writer-director J.J. Abrams, though he remains a producer on the film, and the film has an entirely new writing duo behind it — Roberto Orci left the project he was once set to direct — with Simon Pegg and Doug Jung taking over. The characters and actors are the same, but the creative team behind the camera has very much changed.

It seems likely that Paramount Pictures were hoping to re-invigorate the Star Trek franchise by hiring Justin Lin to direct. Lin, after all, is the man largely credited with rebooting the Fast & Furious series, having directed the second round of the trilogy (Fast & Furious, Fast Five, and Fast & Furious 6). That said, Lin is apparently apprehensive about committing to an entire new series of films. "I'll never say never, but I've had a great time. I'm also getting older and there's a lot of stuff I wanna do," Lin told /Film at a roundtable interview in 2015. He might help propel Star Trek to a fourth movie, but his involvement in any future films seems unlikely.

There's also the rest of the main supporting cast to consider. Quinto and Pine might have deals in place for a fourth movie, but what about their co-stars Zoe Saldana, Karl Urban, Pegg, and John Cho? Given the fact that both Quinto and Pine originally signed contracts for a trilogy, it's likely that the other actors' contracts also expire after Beyond, meaning that it would take another round of contract negotiations to get a Star Trek 4 going.

One cast member that will not be returning, sadly, is Anton Yelchin, who died tragically earlier this year, long after the filming of Star Trek: Beyond. Yelchin played Chekov, the beloved Russian officer on the USS Enterprise. Should there be a fourth Star Trek movie, it will be without one of the original crew members. It's hard to say how Yelchin's death could affect the possibility of a fourth Star Trek film. On the one hand, it provides filmmakers with an opportunity to introduce a brand new character into the crew, which might help expand the Star Trek universe and franchise. On the other hand, it would be off-putting to many fans to see the original crew together without him. Not to mention the fact that it might impact the cast's decision to return for another film or not.

All things considered, there's no real reason to think of Star Trek Beyond as the end of the franchise. The only question is, how much of the crew will still be in tact for a fourth Star Trek movie.