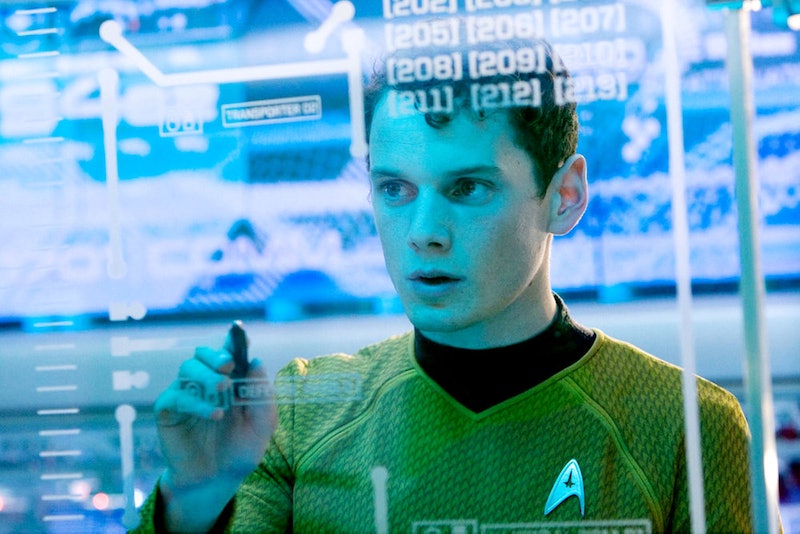 When the news broke on Sunday that young actor Anton Yelchin was killed in a freak accident involving his car, fans of the star were heartbroken. Here was a young man in the prime of his life, whose career had just taken off within the last few years, and who had a world of possibilities ahead of him. It was truly tragic news, and the entertainment community came together to mourn the loss. One group in particular is feeling tremendously gutted: The Star Trek community, made up of filmmakers, actors, and fans. As an enormous Star Trek fan, Yelchin's death hit me pretty hard, as losing a member of the crew, even one who was relatively new, reverberates throughout the entire community.

Though Yelchin had had a successful indie movie career carved out by his early 20s, he hit it big when he was cast as Pavel Chekov in 2009's rebooted Star Trek. I remember feeling skeptical when I first heard about the movie as, like other fans, I didn't know what to make of the fact that the beloved cast of characters from the original 1960s series was going to be replaced with new actors. Those chosen for the parts had major shoes to fill, and it would have been a disaster if it didn't work. But, thankfully, it did.

Like so many of the other actors in Star Trek, Yelchin played his role wonderfully and captured the essence of his original character very well. The young, naive Chekov was wide-eyed and green, both at the start of Star Trek: The Original Series and in the 2009 film. Yelchin played Chekov as charming, confident, and loyal, and while all of the performances in the movie were touching tributes that resisted turning into caricatures, Yelchin's 17-year-old prodigy particularly captured the hearts of many fans, including myself.

It can't be understated how important the performances of the cast, Yelchin's in particular, were to Star Trek's success. Were it not for the actor and the 2009 film, it's hard to say if the current Star Trek resurgence would have happened. But today, there is an entire film franchise, a new series in the works at CBS, and numerous 50th-anniversary celebrations for this year and next have been planned. The new show and those events are only going to make the fan community bigger and those involved, at any stage, more beloved. The last true Star Trek era was in the '90s, when audiences were saturated with Star Trek series, from The Next Generation to Deep Space Nine to Voyager, but fans hadn't seen any new Star Trek on television since Enterprise wrapped up in 2005. Now, though, the franchise is making a return, and it seems like we're about to enter a new Star Trek era.

Which is why the death of Yelchin, an actor just beginning to embody the iconic franchise, hurts so much for members of the Star Trek community. As the years have passed, fans have, sadly, gotten used to losing greats like Leonard Nimoy, DeForest Kelley, or James Doohan, due to age, but not young actors like Yelchin. Not only was what happened to him an incredible freak accident, but his death at just 27 is a tragedy, and one that reverberates throughout the community.

Losing Yelchin at a time when the fan base was gearing up for more Trek is such a shame. With Star Trek Beyond hitting theaters on July 22, fans will get to see Yelchin play Chekov once again, and it will surely be bittersweet. The question remains, though, where the film franchise goes from there. Assuuming that there will be more Star Trek films with this rebooted cast, what will become of Chekov? Replacing the actor would be seen as a tacky move, I think, but adding a last minute death to the script is also probably out of the question. Obviously, fans don't yet know what happens in the film, and actors' deaths have been worked into scripts before, but for now, all Star Trek fans can do is wait and see, as we process the loss of our beloved Chekov.