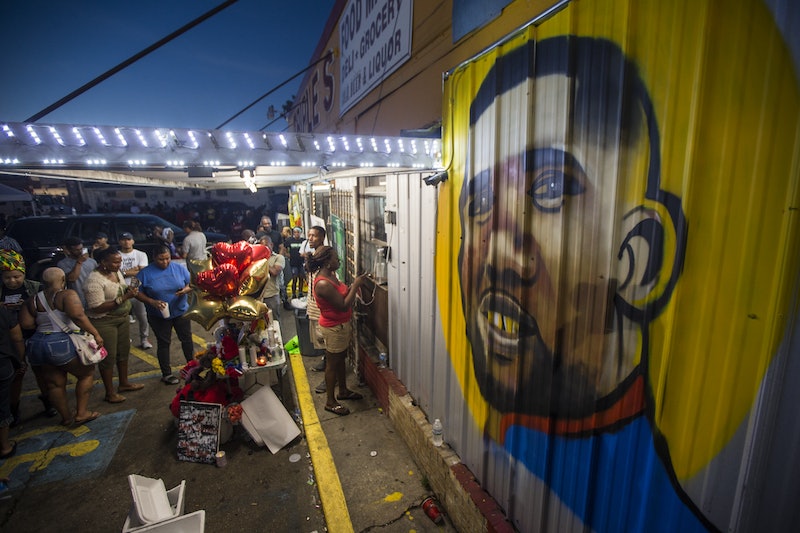 A young man whom America got to know last week under intense circumstances has returned to the spotlight to make a plea. Alton Sterling's son Cameron asked for peaceful protest on Wednesday, in a scene that was equal parts impressive and heartbreaking. Impressive because he spoke so movingly and compellingly amid what must be a huge amount of grief, and heartbreaking because he felt the need to accept this burden so soon after suffering such an awful loss.

Sterling died last week during an altercation with Baton Rouge, Louisiana police officers, and bystander videos of the incident helped fuel outcry throughout the country. In the videos, it appeared that Sterling was shot at point-blank range while on the ground, seemingly restrained by a pair of officers. Protests against police killings of black people have already been a common sight in American life over the last few years, starting after the death of Michael Brown in Ferguson, Missouri in 2014. On Thursday night in Dallas, Texas, one such protest was derailed when a sniper fatally shot five police officers and injured seven more. That's the backdrop against which Cameron Sterling pleaded for unity on Wednesday, saying he wanted people to "protest in peace," and for "everyone should come together as one united family."

My father was a good man. That was a sacrifice to show everyone what has been going on in life, and it should give everyone a push that everyone should be together, not against each other. Everyone needs to be on one accord. I feel that everyone- yes, you can protest. But I want everyone to protest the right way, Protest in peace, not guns, not drugs, not alcohol, not violence. Everyone needs to protest in the right way, with peace. No violence.

Dallas police chief David Brown has told the media that the shooter did express a desire to kill police officers because of recent killings of black people, but also denied any affiliation with any particular group. Black Lives Matter has condemned the killings. Also, the reported facts about the shooter so far paint an unstable, warning-flag-riddled picture, even well outside the bounds of his racial views.

Regardless, while it's impressive to see Cameron Sterling able to compose himself and deliver a message he clearly feels is important, it's also kind of rough to watch. Seeing his heart-wrenching breakdown on national television last week, crying for his dad, and knowing that so many relatives and friends of slain black people have been put in this position before, shouldering the additional weight of speaking on racism, suffering, and protests while still grappling with their loss ― it's all so painful and fraught. It's hard to know quite how to feel.