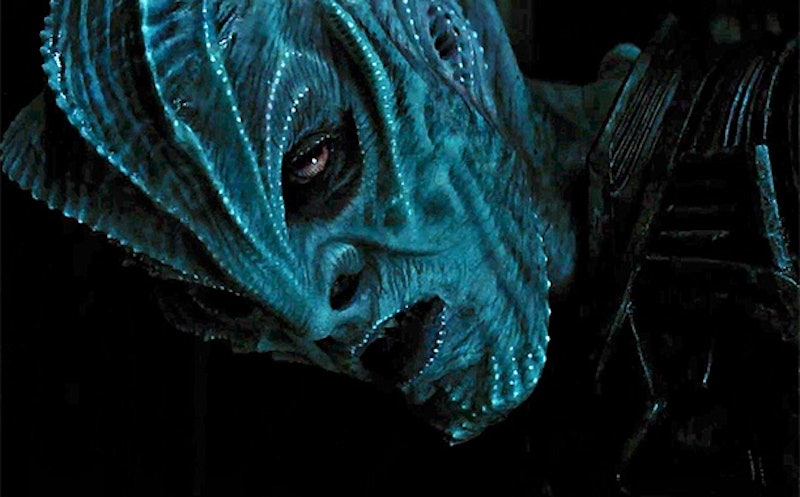 When it comes to iconic villains, few franchises can hold a candle to Star Trek. The series has given fans such memorable baddies as Khan (or, more appropriately, KHAAAAAAANNNN), General Chang, and of course the Klingons, and it's looking to add another icon to its rogues gallery in the new film Star Trek Beyond. And if anyone is up to the challenge of introducing a new villain to Star Trek, it's Idris Elba. But just who does Idris Elba play in Star Trek Beyond ?

Elba is playing a new character named Krall in the film. At least I'm pretty sure he's a new character. It seems highly unlikely that the film would pull another switcheroo like the heavily-criticized Khan fiasco in Star Trek: Into Darkness, so if they're billing the character as new I'm going to believe them. Now some fans had guessed, based on his appearance, that Krall was either a Gorn or a Jem'hadar, but that's apparently not the case. According to director Justin Lin, he's a member of a brand new race. Lin told Peter Sciretta of Slash Film that Krall is a "new species that we discover in this chapter," meaning that hardcore Trekkies won't have much of an advantage over newcomers when it comes to figuring out the character.

But just because fans don't know the character's race, that doesn't mean nothing has been revealed about him. Fans have been made privy to some of Krall's motivations, and he essentially has the opposite viewpoint of the Federation. While the Federation's goal is to explore new worlds, "the Final Frontier" and all that, Krall strongly opposes what he views as possible colonial expansion. As the character states in the film's trailer, "This is where the Frontier pushes back."

Lin also discusses that type of philosophy in his Slash Film interview, saying:

"It was just really embracing the idea that the Federation, what would happen if you were going on a five-year journey and you’re trying to also not only explore, but also maybe introduce other people to this way of thinking. What would that mean? What are the consequences to that? I mean, spreading a philosophy that you believe in that you think is great, are there gonna be any other points of views that’s gonna counter you? And I think that those are the things that I thought of as a kid. And also then as an adult when I watch Star Trek. And I think we got to kind of explore that a little bit."

A new featurette that focuses on the character also reveals a bit, with Elba stating that the character is complex and empathetic. In other words, he's not evil, he just has a possibly valid viewpoint that happens to conflict with the film's heroes. Oh, and he also destroys the Starship Enterprise, which is kind of a big deal.

So to sum up, Idris Elba plays Krall, the villain of Star Trek Beyond . A member of a brand new race who hates the Federation for possibly just reasons, who destroys the Enterprise, and who likely causes even more damage before the movie's over. I think it's safe to say that Krall will easily find his place with Star Trek's venerated hall of villains.