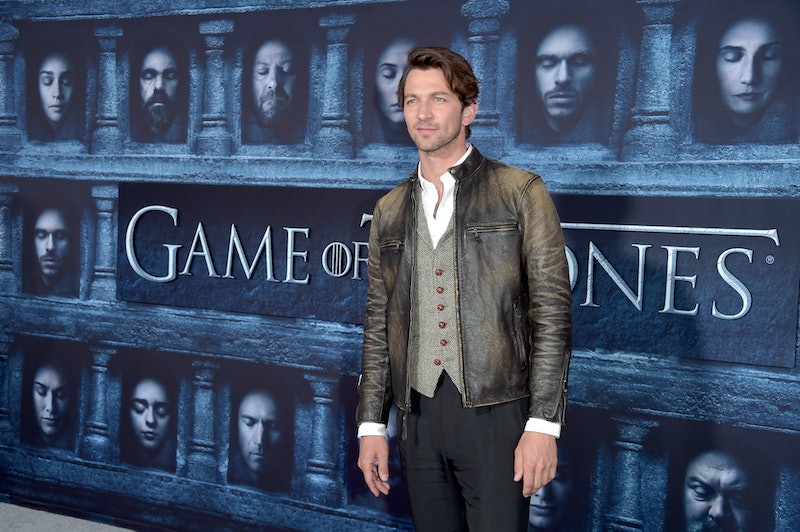 The explosive (yes, pun intended) sixth season of Game of Thrones has come to an end, leaving fans to spend the hiatus until Season 7 wondering just what will happen in Westeros next year. Of course, with Daenerys Targaryen setting sail for Westeros and leaving Meereen behind, the show may be entirely focused on the seven kingdoms — but what does that mean for our favorite Second Sons warrior? Is Michiel Huisman leaving Game of Thrones ? Unfortunately, I may have some bad news for Daario Naharis fans since it doesn't seem Huisman will be back for another season, though no official confirmation has been made just yet.

Now, this news shouldn't come as too much of a surprise considering where we left Daario at the end of Season 6: Heartbroken in Meereen. He was left by Daenerys to keep the peace in Slaver's Bay along with his Second Sons host rather than sailing alongside his queen to conquer Westeros. The whole scene played out essentially like your typical "It's not you, it's me (translated to: I'm not interested in you as much as you're interested in me)" break up — with the added factor that Daenerys needs to be free to make marriage alliances in Westeros, which she can't do with her boy toy in tow.

With the focus of Game of Thrones shifting largely to Westeros (all the major characters either sailed with Dany or, in Arya's case, also returned to the seven kingdoms), it seems unlikely we'll revisit Daario after his breakup with his queen. Though Huisman did point out in an interview with The Daily Beast that Daario is still out there in the world:

I am disappointed [Daario didn't get a death scene]. But he’s still out there, you know. It’s a big world. He got left behind, but who knows?

Sure, Daario may be still alive and kicking around in Meereen when Season 7 kicks off, and he may even disobey his queen to charge into Westeros with his Second Sons in order to come to her aid (though something tells me he's not the type to disobey his queen, or his ex-girlfriend). There's certainly some hope that Daario and Huisman could return to Game of Thrones.

But, that being said, I have one word for you: Gendry. Remember Gendry? Gendry who was set to rowing away from Dragonstone and never seen or heard from again? I'm not saying Game of Thrones has a problem with completely forgetting characters when they aren't killed off gruesomely and are no longer relevant to the plot, but that's exactly what I'm saying.

While theoretically it's possible for Huisman to return to Game of Thrones as Daario, the show has plenty other story threads to pursue in its final seasons. So, unless Daario somehow becomes essential to the plot and the upcoming war in Westeros, I can't see the show bringing him back anytime soon. But, of course, I could be wrong. Game of Thrones is completely off book now, so anything is possible!