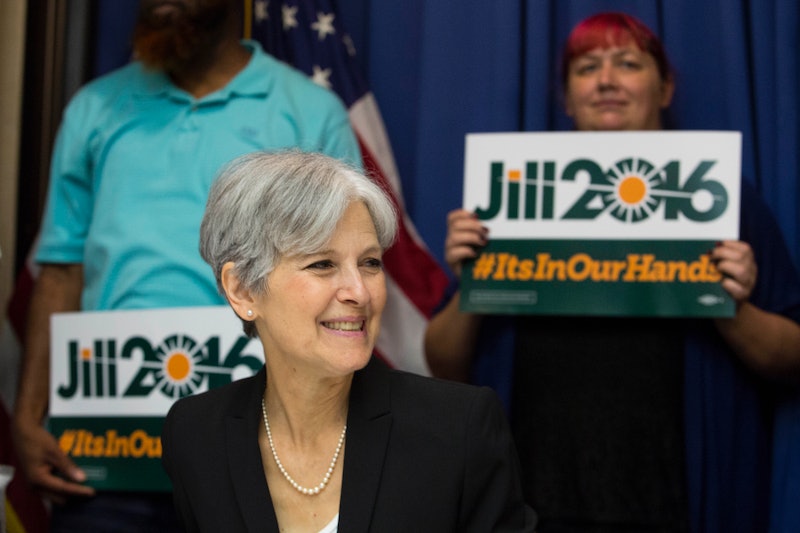 Disappointed supporters of Sen. Bernie Sanders who don't trust that the Democratic Party will make a truly progressive shift, or that Hillary Clinton will be a progressive president, won't all follow Sanders in sticking with the party and its nominee. Jill Stein, presumptive Green Party nominee, aims to be the candidate of choice for these disenchanted leftists. Her mistrust of major-party politics has kept her outside the Democratic Party, and Stein will be outside the Democratic National Convention to "keep the revolution going." She'll be marching in the "March for Our Lives" on July 25, and holding a rally that evening.

Stein wants to divert as much of the momentum as possible that Sanders' campaign sparked away from the Democratic Party, since she doesn't think it can adopt truly progressive positions. As she put it in an interview with Grist in March, "You can’t really have a revolutionary campaign inside a counter-revolutionary party." When Stein called on Sanders to join her and the Greens, she said that the Democratic establishment was working against him in a number of ways, including a limited debate schedule and early Clinton endorsements by a large number of superdelegates.

Stein permanently broke from the Democratic Party when the Democrat-controlled Massachusetts Legislature overturned the Clean Elections Law that Stein helped advocate for, which passed by referendum vote in 1998. Throughout the early 2000s, Stein ran for the offices of governor, state representative, and secretary of state of Massachusetts on the Green-Rainbow Party ticket, and she was the Green Party's presidential nominee in 2012.

Stein will be a likely alternative for Sanders supporters who aren't down with Clinton, since her platform is similar to Sanders', though it does go further than his in several ways. The Green Party wants to cut military spending by half, close military bases around the world, shift to all renewable energy by 2030, and reform the electoral system to make third parties more viable.

But the most fundamental distinction between Stein and Sanders is that she refuses to play the major-party game, and her uncompromising stance will likely appeal to those Sanders supporters who were disappointed by his endorsement of Clinton, whom he had railed against as the establishment candidate throughout the primaries.

Stein's presence in Philadelphia will be potently symbolic. As Sanders and Clinton convention it up inside the Wells Fargo Center with the Democrats, Stein will be outside the convention, as she is outside the two-party system, surrounded by citizens frustrated with the political system as it stands. She'll present herself powerfully as an alternative for Sanders supporters, both those protesting in Philly and those at home wondering what to do next.