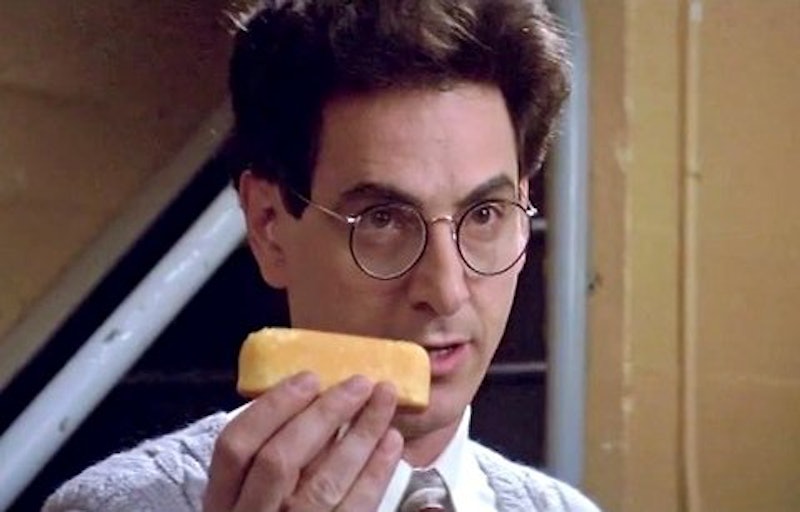 One of the most anticipated films of the year, the new Ghostbusters, is finally here; ready to introduce a whole new generation to the phrase "Bustin' makes me feel good." And even though the film is a reboot of the franchise rather than the sequel, it's still full of callbacks to the original Ghostbusters from 1984. Speaking of the original team, Bill Murray, Dan Aykroyd, and Ernie Hudson all have cameos in the film. But one original Ghostbuster who doesn't is Harold Ramis, who passed away in 2014. But that doesn't mean the movie forgot about him, as of course, there is a Harold Ramis tribute in Ghostbusters.

Minor spoilers ahead! When it comes to Ghostbusters, Ramis is a pretty important figure. Not only did he star as nerdy Ghostbuster Egon Spengler in the film and its 1989 sequel, but he also co-wrote both movies with Aykroyd. So it's safe to say that without Ramis, there would be no Ghostbusters. The new film recognizes this and includes two tributes to the comedy legend. The first tribute comes in the form of a bust of Ramis seen at Columbia University near the beginning of the film. Then, at the end of the movie, there's a title card dedicating the film to his memory. And as an added bonus, Ramis' son Daniel cameos in the film during a rock concert scene.

While Ghostbusters fans certainly recognize Ramis, some people may not know just how influential he was in the world of comedic film. Both in front of and behind the camera, Ramis had a hand in possibly more classic comedies than any other single person. Take a look below at some of Harold Ramis' non-Ghostbusters work, and start paying your respects to this legend.

Ramis' first-ever screenwriting credit is responsible for practically every college movie stereotype, and it's still being mimicked today. The movie is also one of four with Ramis' involvement to make the list of the American Film Institute's top 100 comedies of all time.

Ramis followed up Animal House by co-writing Bill Murray's first starring vehicle, a film that is as influential to summer camp movies as Animal House is to the college genre.

Ramis not only co-wrote this film, he also made his directorial debut. It's now regarded as a classic, and also made AFI's top 100 comedies.

Ramis had his big screen acting debut alongside Murray in this comedy that he also co-wrote. The film was directed by Ivan Reitman, and all three would of course unite again three years later for Ghostbusters.

Working off a brilliant John Hughes script, Ramis directed Chevy Chase in what I consider to be one of the funniest movies of all-time.

Quite possibly the best film that either Ramis or Murray was ever involved with, Ramis won a Best Original Screenplay BAFTA for co-writing the script. He also directed the film, which is his third entry on AFI's 100 Laughs list (Ghostbusters is the fourth), and he popped up in a cameo.

Robert De Niro has appeared in a great number of comedies over the past two decades, but few hold up as well as this one, which Ramis both directed and co-wrote.

A rare acting appearance in a film that he didn't write or direct, Ramis memorably played the father of Seth Rogen's character in this Judd Apatow comedy.

Harold Ramis was truly a giant when it comes to comedy, and it's good to see him getting the respect he deserves in the new Ghostbusters.