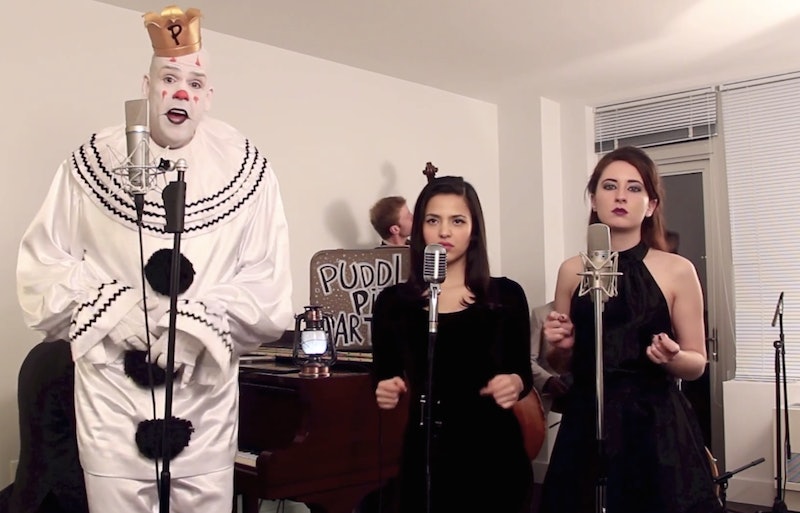 Of all the teams to be on, Puddles the Sad Clown's might be the most worthy. Because this delightfully strange Internet entity has stolen our hearts once again with a cover most extraordinary. Following a previously released and sensational cover of Lorde's "Royals" — garnering over 5.8 million views —the Puddle Pity Party has returned to the Internetwaves with another take on the current teen queen's repertoire. This time it's "Team" that gets the sad-and-sultry (we know how confusing that is, visually) treatment.

This is Puddles' second team-up (we know, we know) with the band Postmodern Jukebox — they also worked on "Royals" (not the Springsteen version). According to Scott Bradlee, the leader of the group, it all went down like this: "Last week, I got a call from the front desk of my building to inform me that a 7 ft clown was here to see me. Immediately recognizing this to be Puddles, the golden voiced sad clown from our 'Royals' cover, I called in the band. Although Puddles doesn't speak, it soon became evident that he wished to cover another Lorde song. So, here's our cover of 'Team.'" And just like that, the magic happened.

To call him golden-voiced is actually an understatement. Pitch perfect is exactly what Puddles is: in fact, we daresay we enjoy Puddles' version just as much — if not more — than the original thanks to the hulking sadness that overlays the song's tender strength-in-solidarity themes. But you shouldn't take our weird and wacky word for it: queue up the video and let the maudlin, vaudevillian glory wash over you. It's what Puddles would tell you to do, if he were much of a talker. And we bet it's what cool girl Lorde would want, too.