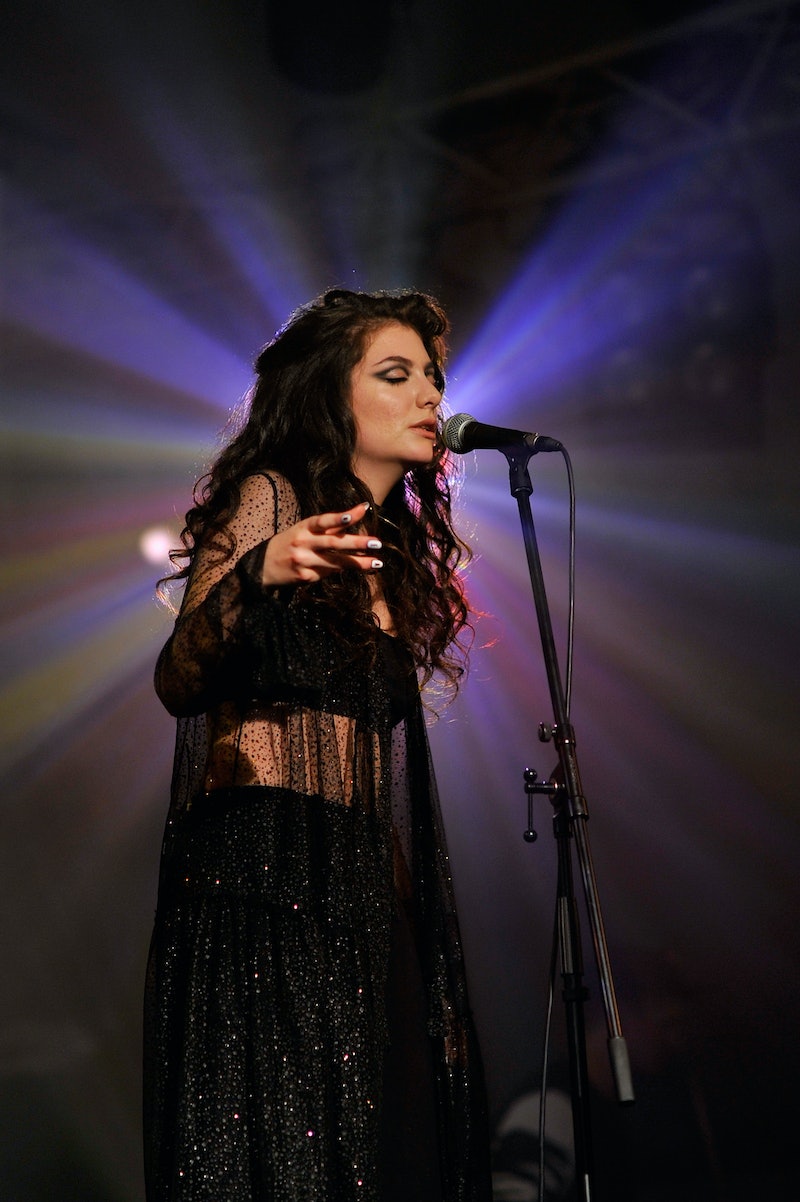 In the age of female celebrities like Katy Perry and Carrie Underwood swearing they're not feminists, just "strong women," Taylor Swift giving an "I'm so shocked" face every time she wins an award, and up-and-coming stars being told to be grateful first and confident second, there is some reason for hope — and her name is Lorde.

If you're unfamiliar, Lorde (real name, Ella Yelich-O'Connor) is the 16-year-old singer/songwriter from New Zealand who has skyrocketed to international fame over the last year, thanks to the success of her first single, "Royals," and the critical acclaim for her debut album, Pure Heroine. If you've read even one interview with her, you know that she's strikingly beautiful, insanely talented, and, most importantly, a perfect role model for young girls. Why? Because Lorde, unlike so many of her peers in the entertainment industry, doesn't shy away from her newfound fame or use her young age as a deterrent; instead, she proves herself over and over to be one of the most confident performers working today, regardless of age, experience, or gender.

And that's just scratching the surface. Over the past several months, Lorde has demonstrated her supreme confidence, showing fans and critics that she's very, very different than her peers — in the best way possible. She's not arrogant, acknowledging her luck when the topic arises, but she's also not exceedingly humble. She knows she's talented, and she doesn't see a reason to pretend otherwise.

This is a huge contrast to many female pop stars of today, who automatically defer to "I'm just so grateful and shocked!" whenever the topic of their fame comes up. It's understandable that they don't want to appear conceited, but it's also doing a disservice to their young female fans, who deserve confident role models. Luckily, there's Lorde, changing up the game for the better with every honest, self-assured interview.

As a self-described feminist, Lorde is also making enormous strides for the term's perception. So many female celebrities refuse to call themselves feminists, either out of fear of alienating fans or for a simple lack of understanding of what the term implies. They say they're strong or successful or independent, but when the word "feminism" comes up, they're quick to reject the label, despite feminism being all of those qualities and more.

Yet Lorde embraces her feminism, calling other women out for being hypocritical (see Selena, above), befriending other young feminist idols like Rookie 's Tavi Gevinson, and clarifying the definition of the word for those hesitant to label themselves: "A lot of girls think it's not shaving under their arms and burning bras and hating boys, which just seems stone age to me." Amen.

So often, girls and women are told to deny or understate their accomplishments and self-worth, because even in today's society, confident females are more often referred to as "bitchy" than "assertive." Even the most successful women are judged on a harsher level than men, especially in the entertainment industry; for every Miley Cyrus whose every move gets her accused of being wild, idiotic, and mentally insane, there's a Harry Styles, whose party-hard, sleep-around antics aren't given more than two sentences mention in the tabloids. It's a double standard that sets terrible examples for young girls, causing them to think that they have to be quiet, meek, and accepting of their place in the world, no matter their aspirations or abilities.

Yet thanks to the words and actions of a 16-year-old newcomer, things are beginning to change. With comparisons to Kanye and feminist labels, Lorde is proving that she's set on shaking things up, despite the risk to her career. And judging from her success — Pure Heroine sold 129,000 copies in its first week, and "Royals" made her the youngest artist in 26 years to reach the #1 spot on the Billboard Hot 100 —her plan is working beautifully.

Thanks to Lorde, girls and women now have a positive role model in the music industry, and inspiration, finally, not to renounce their own confidence.