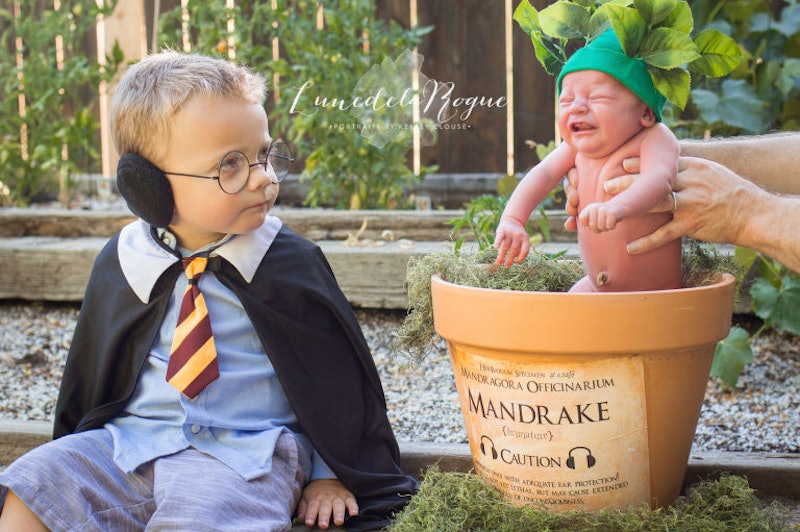 No formerly only child is especially pleased when their parents have a new baby, but never before has that feeling been as hilariously captured as it was in this Harry Potter -themed newborn photoshoot. Parents Katherine and Jesse Oldfield, aka your new Potterhead Goals, had already staged a Harry Potter themed photoshoot for their first son Sebastian when he was eight months old. But now that new baby Theo has joined the magical squad, they enlisted the help of photographer Kelsey Clouse of Luna de la Rouge Photography to create a new concept so hilarious that you'll be mad you didn't think of it first.

As everyone knows, the sound of an Mandrake's cry is fatal to everyone who hears it — and in the Harry Potter-verse, the immature Mandrake's cry can do some pretty extensive damage, too. (An examination on why Professor Sprout thought this would be a baller lesson for a bunch of eleven-year-olds is a think piece on child safety the internet can ponder some other day.) Capitalizing on the hilarity of the scene in Harry Potter when Harry, Ron, Hermione and their fellow Gryffindors were tending to baby Mandrakes in class, the Oldfield family had Clouse pose their sons with Sebastian as the reluctant student with protective earmuffs and little Theo as a Mandrake, cries and all.

Sebastian seems to be a proud Gryffindor, though, so no doubt he will be able to endure young Theo's wails like the brave older brother he is. In the meantime, can we all just take a moment to appreciate how ridiculously precious this is? Petition for Theo to star as a Mandrake in the upcoming Fantastic Beasts movie, STAT.

Clouse shared the photos on her Facebook page last week, where they immediately went viral, now racking up over 89,000 shares.

"Thank you so much to everyone for the wonderful comments, likes and shares!" she wrote on her page. "Love seeing so much positivity and love for this image of these two sweet boys posing for their momma's idea; what a great change of pace in the world of social media, where there can be so much negativity and controversy. It means the world to me to see so many sweet and supportive people on this post. From the very bottom of my heart, thank you so much."

In other news, if anybody's willing to let me borrow their kids for more Harry Potter themed photoshoots, HIT ME UP. I'm a Hufflepuff, it's legit.