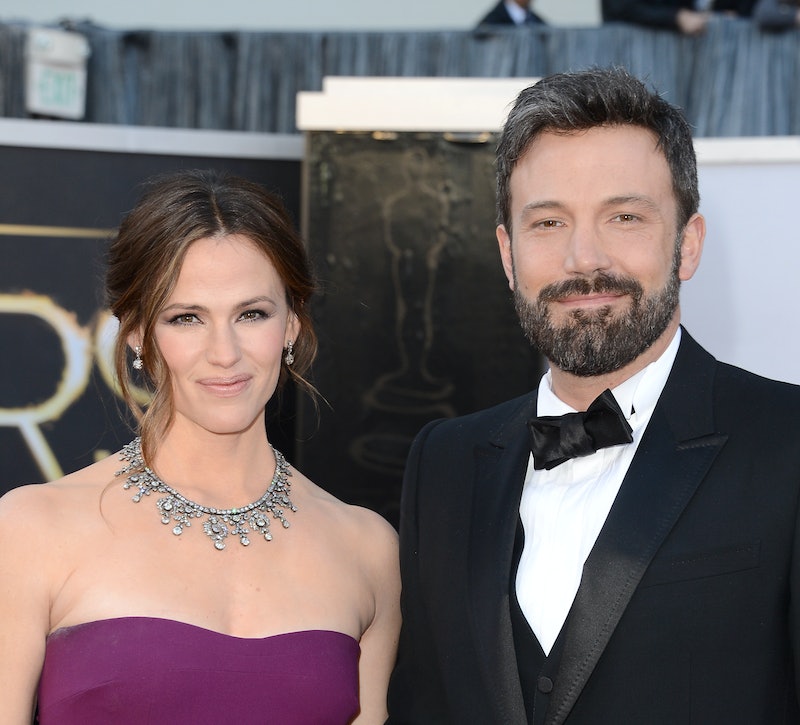 It's been a little over a year since once beloved couple Jennifer Garner and Ben Affleck announced their divorce after 10 years of marriage. Like many favorite celeb couples who end romances, the breakup news pretty much broke the Internet. Even though a lot of time has passed since their split, I'm sure it still pains their biggest shippers. But, there may be some good news. According to Us Weekly, Garner and Affleck may have put their divorce on hold.

Bustle has reached out to reps for Garner and Affleck for comment, but has not yet heard back.

Some sources claimed that the two have stopped the divorce talk altogether. A "source close to Garner" reportedly told Us, "Jen mentioned that the divorce was going through very soon, and then a few weeks ago, things changed. It does not seem to be moving in that direction." The same source added, "Jen seems to still be in love with Ben but doesn’t allow her mind to go there. She just focuses on the kids."

Another source concurred and said that Affleck has similar feelings as Garner: "If it was up to Ben, they would be together. He feels like he can’t live without Jen."

Before you get too excited over the rumors, it seems more likely for the Daredevil stars to separate permanently rather than reconciling. Despite the words from the Us Weekly sources above, a different Affleck source claimed that lawyers are currently dealing with the divorce details — and are doing it privately. "They were never in a rush to file," the source said. "This was always the plan."

Yes, Garner and Affleck are often spotted together, but that seems to be for the sake of their three children, Violet, Seraphina, and Samuel. Plus, a source told E! News in July 2016, "There's absolutely no shot of a reconciliation. They are just doing a really good job of co-parenting. They are working really hard to create normalcy for their kids. That is their focus."

The former Alias star even opened up about co-parenting with Affleck in a March 2016 chat with Vanity Fair . She said,

"The main thing is these kids — and we’re completely in line with what we hope for them. Sure, I lost the dream of dancing with my husband at my daughter’s wedding. But you should see their faces when he walks through the door. And if you see your kids love someone so purely and wholly, then you’re going to be friends with that person."

Even the Batman v Superman actor told the New York Times in March 2016 that the two are on good terms. "Jen’s great. She’s a great person. We’re on great terms. I just saw her this morning, so that’s the reality that I live in."

Heck, they even spent time in Europe together while Affleck filmed Justice League, because that's what great co-parents do. As a source told People in May 2016, "Nothing has changed [in their relationship]. They're still all about putting the kids first."

So, just because they look happy post-divorce announcement and there are rumors, none of that means anything. It seems like they are trying to keep everything civil for their children.

More like this
Long Live Bennifer!
By Allie Jones
'Dirty Dancing's Jennifer Grey Wants Harry Styles To Be The Sequel’s Love Interest
By Grace Wehniainen
Thank U, Ex
By Rosemary Donahue
Kaley Cuoco & Tom Pelphrey Just Made Their First Public Appearance As A Couple
By Hugh McIntyre
Get Even More From Bustle — Sign Up For The Newsletter