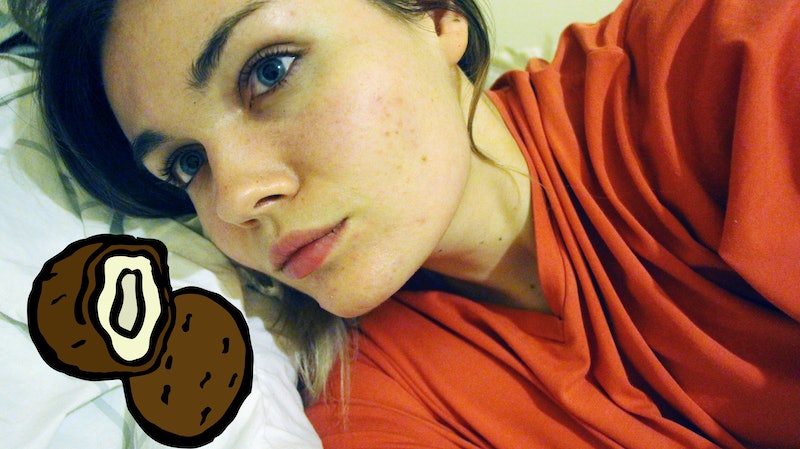 In recent years, there's been quite a lot of hype surrounding the many uses of coconut oil, including using coconut oil to remove makeup. As a massive cynic, I initially wasn't too keen on caving in and joining the bandwagon. But after running out of makeup-removing wipes and wanting to try something a little less harsh on my skin — and something that didn't involve putting water on my face — I decided that this would be the perfect time to put the magic substance to the test.

Since hormones, house-moving stress, and a lack of hot water after my boiler went into hibernation all recently combined to wreak havoc on my skin and cause mass breakouts, destiny made it clear to me that this should be the time to experiment.

My makeup artist friend Silvija Vil advised me to melt a little bit of coconut oil between my hands, slather it across my face, leave it on for a while, and then gently remove all traces of it using cotton pads. I decided to challenge myself to undergo the process every day for a week, just to see how practical a makeup remover coconut oil really is, and whether it would improve the quality of my skin. This is what happened.

The first day of my coconut oil adventure went pretty smoothly, although I did accidentally melt far too much when unsure of how much to use. Rumors say that it makes a decent moisturizer, so I proceeded to rub it into my arms and ankles so I wouldn't waste anything.

Did it remove my makeup? Yes. Was it hard to get it to remove my makeup? Not really, but I definitely needed some extra elbow grease to eradicate the mascara. This is likely why the area around my eyes appears so red in the final photo. I wasn't expecting to see any miracles on my face within minutes, but my visage did feel pretty soft at least.

After starting out with a fairly minimal makeup look, I thought I'd better put a little gel eyeliner and lipstick on during the day just to see how that fared against the oil. This was also my fourth day without hot water, so my hair was starting to resemble what my face looked like after being covered in coconut oil. It was great.

Unsurprisingly, it took a bit more time to expel all the black gunk from around my eyes. But no more than some handy, dandy wipes would've taken.

I have quite oily skin around my T-zone, but it can get dry at times around the sides of my nose. This can often make liquid foundation appear flaky, even when applied over primer.

Upon waking up on the third day of the coconut oil adventure, I had noticed that any usual dryness had vanished. This may just have been a coincidence, or it could've been a blessing from the moisturizing nourishment of the coconut oil soaking into my skin overnight.

By the time I had gotten around to taking my makeup off on the fourth day, it was 3 a.m. and I was starting to resemble a still from the Orange Is The New Black intro. Apart from my long-wearing eyebrow product and mascara, the majority of my makeup had already decided to remove itself.

Unless I have solid plans for the evening, I only tend to apply makeup while getting ready in the morning. This made eradicating the leftovers super simple. Even though a pimple near the left side of my mouth had diminished since I started applying coconut oil, there were no majorly noticeable differences to my acne overall.

It was around the fifth day when I finally got used to the coconut oil routine and it felt completely natural to reach for the jar and cotton pads come nighttime. It was also this day that my boiler resurrected, so I was back to feeling more like myself.

Wanting to try the removal technique on a slightly different look, I opted for a bright blue eyeshadow. Shadow sans eyeliner is definitely a lot easier to take off with coconut oil than gel eyeliner is, that's for sure.

Was it the change of lighting or was my skin actually looking a bit better sans makeup? There was still a lot of redness around the eye area by Day 6, but that usually sits in correlation with the amount of dark eyeliner and eyeshadow still on my face come the end of the day. More makeup equals more scrubbing, of course. If you're thinking of trying this at home, be sure to take it easy around these delicate parts to avoid further irritation.

Despite being caught in torrential rain on the way back from town, my makeup somehow (and very heroically) survived the downpour. It wasn't anything a little coconut oil couldn't remove, though.

The week flew by, and I can honestly say that removing cosmetics from my face using coconut oil is something I'll continue to do — at least until the end of the jar.

If oily textures make you cringe, and your face is already prone to excess moisture, then this might not be the makeup-removing option for you. However, if your skin is dry on "in between," you can expect a lot of softness, and a relatively hassle-free process.

No, my spots didn't mysteriously vanish like some of the coconut oil hype has had me believe they should have. But at least I've found myself a new and competent means of taking my makeup off at the end of the day.