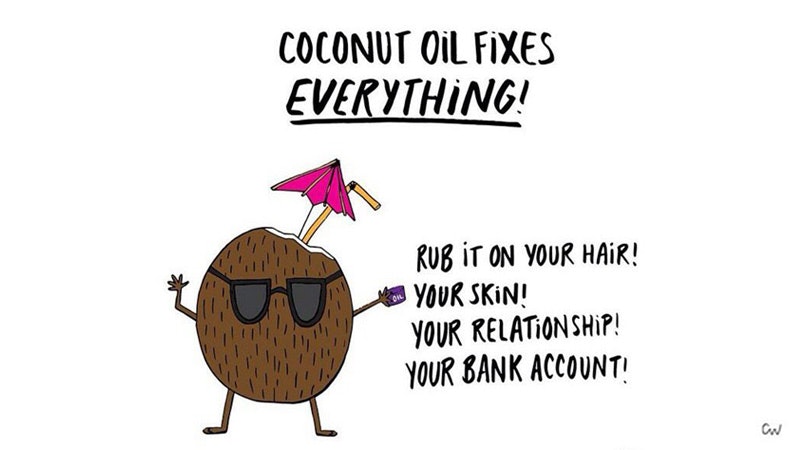 Here are two truths about my personality: I studiously ignore health fads, and I've never met a beauty product that didn't confuse the sh*t out of me. I can't apply eyeshadow, have exactly one makeup brush (which I point in the direction of my face and wave uncertainly), and regard body butters and the other unguents of the cosmetics aisle with puzzled suspicion. I also know next to nothing about gluten, juicing, holistic wellness, cayenne cleanses, or anything that Shailene Woodley has ever said, and I don't want to. However: I have a gigantic, expensive jar of unused coconut oil in my cupboard, and there's something even stronger than either of these characteristics: my determination not to waste an $18 purchase.

Coconut oil is the health and beauty wunderkind of 2015 — partially because of fellow Aussie Sarah Wilson's bestseller I Quit Sugar, which recommends it in high dosages as a sweetener in a sugar-free life. But it's crept out of food into, erm, everything. The Internet has many uses for this supposed wonder-product, and by many I do mean many — one website has a glowing 107, from putting it on your dog's cracked paws to using it as a sunscreen (please don't do that). It's apparently a brilliant cosmetic, a homemade deodorant, even a lubricant for small engines. I decided to find out for myself if it's all hype.

The experiment: Use the most accessible, least-labor intensive coconut oil recipes I can find to cleanse and oil my world and myself, and see if any of the results convert me. [Note: If you're wondering why you can't see my expression while I'm slicking coconut oil through my hair, I have a policy — I don't put any photographs of my face on public areas on the Internet for personal reasons.]

The Method: Putting oil on your face to remove other oils from your face doesn't sound particularly intelligent, but hey, if Allure says it "solubilizes or breaks up water-resistant substances used in eye shadow and mascara," I was willing. How could a science nerd resist the word "solubilise?"

How It Went : I will come clean and say I ate a massive spoonful before I got around to putting it on my face. What? It smells like tropical happiness. However, this is when the problems started. My coconut oil is solid. I was told that a little bit in my hand would rapidly start to soften and turn back into oil form. It didn't. It mainly left my hands feeling as if they were covered in lukewarm, spermish pond scum.

Once enough had softened to actually apply to my face, it seemed to clean off my eye makeup flick — but only with repeated, irritated efforts and a leftover greasiness that is about as enjoyable as a camel-lick. I've achieved much the same effect with water.

The Method: Lauren Conrad, whom I thought was just famous for nodding while other people talked on The Hills, apparently has a lifestyle brand now, and is all about the coconut oil moisturizer. "If you rub a little bit of coconut oil between your hands, you will immediately notice how incredibly moisturizing it feels on your skin," she says about it. "The best part about this oil is that it will absorb into your skin without feeling oily or greasy."

How It Went: Not feeling oily or greasy? I call bollocks, Conrad. I smeared a small bit (melted between my apparently-very-cold hands) on my face, waited several minutes, and tested the texture. Perhaps my pores are glutted full of moisture already, but it still seemed to be sitting there, puddling. My skin did seem smooth, but that's possibly because I kept stroking it to see if it was plump and moisturized yet.

The Method: Here's my beauty exception: as a woman with blue hair, I am actually pretty well-versed in modern conditioners. (Although I may have frozen my argan oil by accident this January.) About.com informed me that a simple hair mask made of coconut oil would be "a god-send to those with severely damaged, over processed, and heat styled hair," so I was at least willing to give it a go. Even though it meant 30 minutes of oil stuck on my head.

How It Went: Well, I can confirm one thing: this oil likes my hair so much that it will not wash out. I generally only condition the mid-to-ends of my royal blue mane, which are the parts with bleach. But after 20 minutes of this oil treatment, my ends were so weirdly slick that I could barely grip them. And even now that I've rinsed and rinsed, it seems to have decided it will be greasy forevermore. I'm not entirely surprised, though: there have been a few disaster stories about coconut oil in hair on the net, so tread carefully.

The Method: My dude and I hoard jars that might be "useful" the way some people rescue cats. We're compulsive. There's never a defined plan for them — we don't make our own holistic peanut butter or have a hive of well-behaved vegan bees — but they always need the labels removed, so I was quite excited to discover that coconut oil could actually help in this despicably sticky process by soaking the label for a minute or two.

How It Worked: I opted for a jar of sun-dried tomatoes that will look prettier without its pointless label. I may, however, have slightly dropped the ball, as the label was plastic. Erm. It still came off, but I suspect that is more to do with my nails and frantic scrabbling (the oil made it treacherously slippery) than any inherent softening quality.

The Method: Apartment Therapy is a big fan of this one. I have never polished wood in my life, so making homemade polish out of coconut oil and a bit of lemon juice made me feel suspiciously like a small child "helping" her parents with the cleaning by covering everything in sticker residue and Play-Doh.

How It Went: Heating up solid white coconut oil in a spoon made me feel like a crack addict, so I put it in a coffee cup and shoved it in the microwave. Then I added lime juice (I haven't got lemons), which made the whole thing smell like a cheap cocktail, found a small piece of wood with no emotional attachment, and rubbed. It seems shinier. Half an hour later: Still sticky.

The Method: I have a habit of distrusting everything that LIVESTRONG says — even though Lance Armstrong isn't with them any more, I still have an aversion to everything connected to his lying self — but their lip balm recipe with coconut oil isn't so much a recipe as a "throw it on your face and go biking" instruction. It's laid-back in the extreme.

How It Went: As you can see in the picture, I have big lips. Big. HUGE. And quite a lot of the parts get dried out to the extreme from summer highs or winter lows. A few minutes after the application, I can report that while the first oiling was extremely unpleasant — like kissing an over-enthusiastic oil slick — it appears to have settled slightly. I do, however, look like I'm wearing one of those alarming hi-shine glosses from the '90s.

The Method: I love my sugar. So the idea of having to give up some of it to make an exfoliating body scrub, as described by New Leaf Wellness (urgh), was not exactly endearing to me. But I sucked it up.

How It Went: I felt like a dessert, and not the fun kind. Oil plus tiny bits — in this case, brown sugar granules — equals incredibly difficult to wash off with water. And, because sugar is not a good thing to get into your vagina for yeast infections, I deliberately had to shower in such a way that it wouldn't get anywhere uncomfortable. Nope. Next.

The Method: I am not good with leather shoes. I accidentally applied the wrong color polish to some light brown shoes, panicked, kept going, and ended up with patchy, slightly distressed flats that my dude assures me look "vintage." So when the option to condition them with something that didn't involve a trip to the shoe repair place came up, it seemed like a viable idea.

How It Went: Success! At least, I think so. The oiled shoe (on the right) became darker, suppler, and thoroughly luscious-looking, as proper leather is supposed to do when oiled. And it sure felt old-fashioned and glamorous sitting at the kitchen table oiling my shoes.

The Method: Far be it from me to doubt the information of a website entitled Coconut Oil Facts, who inform me that coconut oil can be used as a safe and healthy metal polish. "To use coconut oil to polish bronze or other metals," the instructions read, "simply put a little on a soft cotton towel and give the metal a good wipe down and buffing." I was promised that the results will be "sparkly clean."

How It Went: Well, the one I cleaned (left) is certainly less covered in mould and grit, and seems faintly more restored to its original color — but it still bears a distinct air of Buried Under A Shrub-Ness, which I think a good metal cleaner would have probably removed. Though it does smell less like a compost heap?

Look: coconut oil is a tasty, tasty treat. Half of this experiment's materials were gone down my gullet before they made it onto whatever I was testing (I would be a terrible chemist). But my skin feels the same, my hair is sulking, and my metal shrub-candlestick just looks as if it's had a wipe-down with a soapy towel.

My shoes, however, are glowing. I'll give you that one, Shailene.