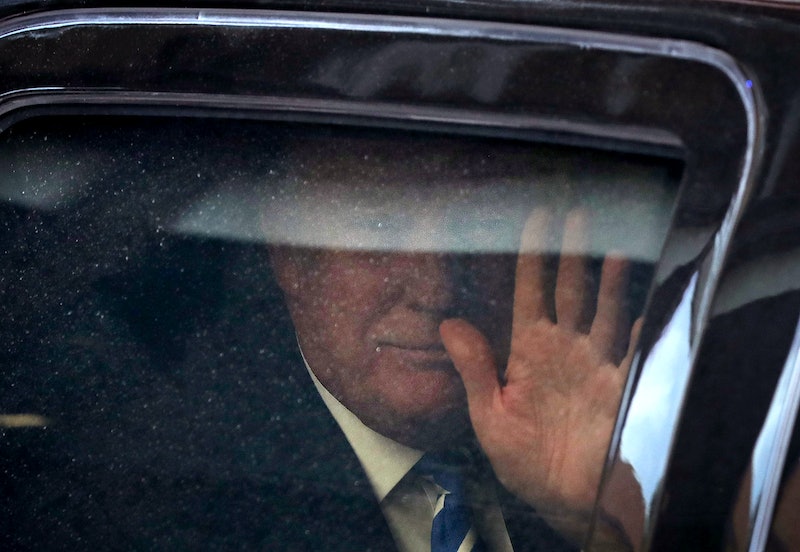 On Tuesday, attorneys for Donald Trump filed a lawsuit in New York against one of Trump's former campaign aides. According to court documents obtained by several news outlets and published online Wednesday, Trump is seeking $10 million for violations to a confidentiality agreement. Who Is Sam Nunberg? The former Trump aide was reportedly fired in 2015 for inappropriate Facebook posts, and this current lawsuit is going directly after him.

On Wednesday, The Guardian published an affidavit that had been submitted to the court by Nunberg. The affidavit revealed important details about his connection to Trump and the campaign, as well as the allegations that the lawsuit made against him. For instance, Nunberg claimed that he began working with Trump in 2011 as a consultant, and he ultimately turned down the opportunity to be Trump's campaign manager for the 2016 election. Instead, Nunberg helped recruit Corey Lewandowski, who served in that role until he was fired this past June. The affidavit reveals the story of a tense relationship between Nunberg and Lewandowski.

"My advice was often contrary to that provided by [Lewandowski] to Mr. Trump, which [Lewandowski] didn't appreciate," Nunberg detailed in the affidavit. "Unlike [Lewandowski], I was not a 'yes man' in my frank meetings with Mr. Trump. Eventually this rift led to my termination."

In the affidavit, Nunberg also alleged that Lewandowski schemed to get him fired from the campaign: "[Lewandowski] contrived and made false accusations against me to Mr. Trump, which ultimately resulted in the termination of my at-will consulting relationship." All of this context about Nunberg and Lewandowski's relationship leads up to Nunberg's claims of innocence. He has reportedly said that he is accused of leaking a story about Lewandowski and another Trump staffer, Hope Hicks, having an "illicit affair." He maintains in the affidavit that this is untrue, and that if he had leaked the story, he wouldn't have been violating his confidentiality agreement. He called the lawsuit's claims against him "vindictive and frivolous."

Lewandowski told the AP he was "not familiar with the court case" and would not comment on Nunberg's charges. Similarly, Alan Garten, Trump's lawyer, told the AP that any allegations of an affair between Lewandowski and Hicks are "categorically untrue."

After Nunberg left the Trump campaign, he began supporting Texas Sen. Ted Cruz in the Republican primary race. He claimed to have made this decision after hearing some of Trump's public remarks on the campaign trail. He asserted in the affidavit that this realignment was not prohibited by his former contract with the Trump campaign.

Either way, Nunberg is just the latest in a laundry list of defendants in Trump's lawsuits. Many of these lawsuits have alleged that the respective defendant said something unflattering about Trump or one of his business operations. Trump unsuccessfully sued an author in 2006 for underestimating his wealth. In 2012, he sued a former Miss USA contestant for writing negative posts about the pageant on her Facebook page. He even threatened to sue rapper Mac Miller over a 2011 song named after the business mogul. And the real (and threatened) lawsuits don't end there.

Trump's habit of launching lawsuits may have to change if he plans to inherit the White House, though. As president, Trump would be even less likely to win a defamation suit than he currently is. That's because public figures have much higher standards to prove in terms of reputation damage in order to win a defamation suit. Additionally, Trump probably wouldn't have much luck suing enemies in government, either. As much as President Obama and Congress haven't always gotten along, Obama would likely never have resorted to suing Congress or a particular member, because the Constitution is too specific about the roles that both the president and Congress should play in government.

If it's not resolved quickly, this new lawsuit could drag on throughout the general election season. That may or may not work in Trump's favor (probably not), but it would definitely be an unconventional habit to maintain if he finds himself in the White House in 2017. Then again, it's probably not the only habit of Trump's that would be unconventional for a president (see: Twitter).