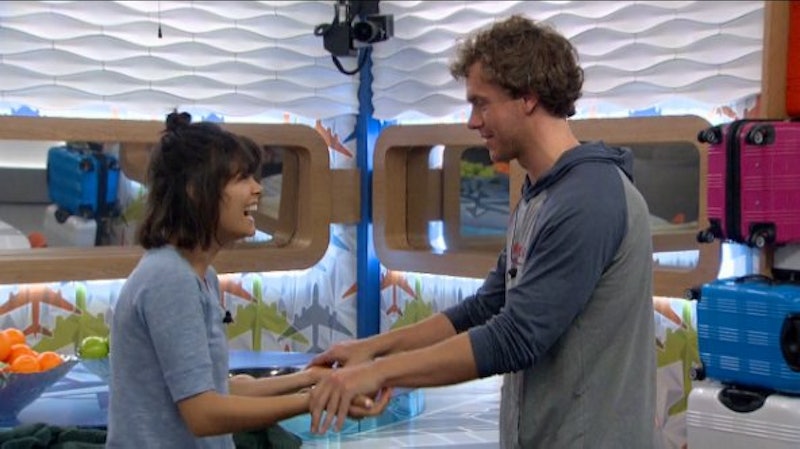 Another week in the Big Brother 18 house means another week for Frank to play everyone around him. His recent target appears to be Bridgette, who he has basically been controlling throughout her HoH run. But, she's not just letting him in her head, she may be letting him into her heart. Are Frank and Bridgette in a Big Brother 18 showmance? Well, probably not if you ask him.

Frank has been open in his Diary Room sessions that he is getting close to Bridgette to control her decisions while she's HoH. He tossed around the phrase "in my pocket" which is rude, but kind of true. I mean, dude told Bridgette he put her best friend up for eviction and Bridgette was all like, "Because you knew she'd be safe, right?" Frank also revealed that he put Bridgette up in Week 1 and she THANKED HIM FOR IT and continued cuddling with him.

This whole potential showmance is troubling for a few reasons, one of which is the fact that Bridgette came into this house with a boyfriend. She admitted in her pre-show bio video that she was dating someone and that there would be "no showmance" in the cards for her.

Now, to be fair, Bridgette hasn't explicitly talked about being romantically into Frank, but they are VERY close these days and their cuddling in the bed would certainly not be something I'd like watching on TV if I was dating her. At the end of the day though, this showmance isn't really even that because Frank is just using her. Hopefully Bridgette realizes that before she gets hurt.