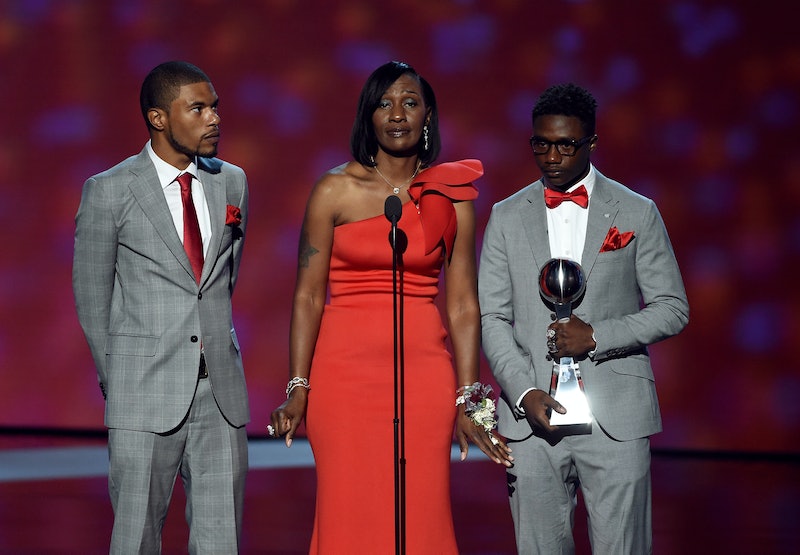 One of the most powerful moments of the ESPY Awards is the presentation of the Arthur Ashe Award for Courage. While last year's honoree Caitlyn Jenner was undoubtedly courageous in her own right, this year, the recipient of the ESPY Award was the late Zaevion Dobson, a 15-year-old high school football star who was shot and killed while trying to save his friends. Dobson was honored with the award in an incredibly moving video montage, a tribute to his life and act of heroism, followed by a rousing speech by his mother and two brothers to end gun violence.

In the tribute video, narrated in first person by Michael B. Jordan as Dobson, the young football star's family recalled how he lit up a room — and Jordan as Dobson recalled the night he was killed.

"I grabbed Faith and Kiera and pulled them to the ground," Jordan-as-Dobson said. "Tried to cover them up. Tried to keep them safe." In shielding his friends from the attack, Dobson was killed.

Accepting the award on his behalf, Dobson's mother and brothers walked on stage and delivered a moving speech about their son and brother, calling for an end to gun violence and encouraging every athlete in the room to use his or her platform to take a stand.

"It's an honor to accept this award on behalf of our beloved Zaevion," his mother stated. "We feel blessed and honored that Zaevion joined the ranks of this award's honorees."

But her speech wasn't just about her son — Dobson's mother also made a point to tell the story of her nephew, Zaevion's cousin, who was killed in a drive-by shooting on his way home from a basketball game in which Dobson was honored.

"Four months later, his 12-year-old cousin was killed in a drive-by shooting," she stated. "Jawan was an innocent victim, active in church, loved sports."

"We as a country need to take a stage to consider the effects of gun violence in America," Dobson's mom advocated. "I am here to urge the movement tonight to save innocent lives. We need to rewrite laws to make it harder for the people to get guns."

The entire tribute was an enormously powerful montage of a life cut too short, the story of a young hero, and an important and emotional call to end gun violence — and for those in power to do their own part in ensuring this country is safer for all.