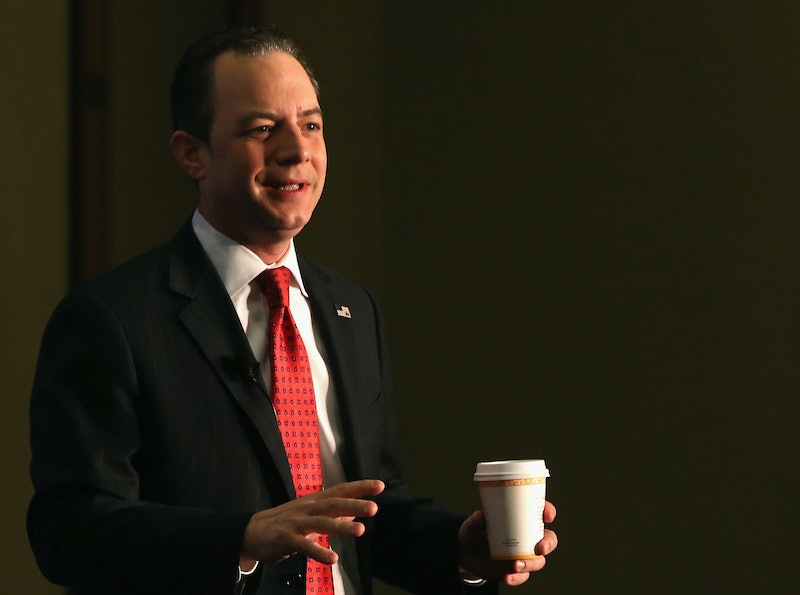 Though Republican politicians will formally elect Donald Trump as the GOP presidential nominee on July 21 in Cleveland, the Republican National Committee chair election will have to wait. In the past, the average RNC chair term has lasted around two years, though chairs are always welcome to run for reelection. Elected on January 14, 2011, current chairman Reince Priebus has served as committee leader longer than any other chairman in history. Though a specific election date has yet to be set, the committee will begin to prepare itself for a new figurehead in the months following the convention. Traditionally, the election has happened in mid-January of every other year.

Priebus has been elected as chairman three times in a row: in January 2011, 2013, and 2015. According to his GOP.com biography, his rise to the top required years of grassroots organization and heavy involvement in his state's Republican Party. Prior to becoming national committee chairman, for example, Priebus was chairman of Wisconsin's Republican Party. The upcoming national convention will be his second and perhaps most controversial convention, given the presumptive nominee's complicated relationship with the GOP establishment. As the Republican Party continues to throw its support behind Trump, the chairman will experience greater pressure to either resist or reflectTrump's political ideology. Under a new leader, however, the party's values could shift drastically.

According to RNC officials, Arizona Republican Party chairman Robert Graham is up for the challenge. Earlier this month, they told Politico that Graham is making sure to familiarize himself with all 168 RNC members prior to both the convention and the chair reelection date in January. Politico also reported that RNC national state party director Mike Pinnell is a viable option. Priebus has not commented on the matter, which suggests he may be stepping down after a whirlwind of an election season.

The hype surrounding chair reelection, however, will be rendered futile if Trump is elected president this upcoming November. In that case, he would choose the RNC chairman himself. If presumptive Democratic nominee Hillary Clinton is elected, on the other hand, RNC members will each cast a vote. A chair nominee would need at least 85 votes to win. A Clinton presidency would also encourage the Republican Party to change the way it represents itself. Most likely, a female Republican, such as Carly Fiorina, would be added to the roster to boost the party's waning appeal among women. In the months leading up to November, however, nearly every aspect of the chair election is up in the air. First, the nation must endure a much anticipated presidential election.

More like this
Michigan’s Governor Is “Going To Fight Like Hell” To Protect Abortion Access
By Andrea Zelinski
How To Fight For Reproductive Rights, Based On How Much Time You Have
By Courtney Young
LGBT+ Men Fleeing Afghanistan Were Denied Asylum By The Home Office, New Findings Show
By Sam Ramsden
Can A Gummy Really Lift Libido? I Tried maude x ASYSTEM’s, And My Verdict Is Yes... A Lot
By Cassandra Seale
Get Even More From Bustle — Sign Up For The Newsletter