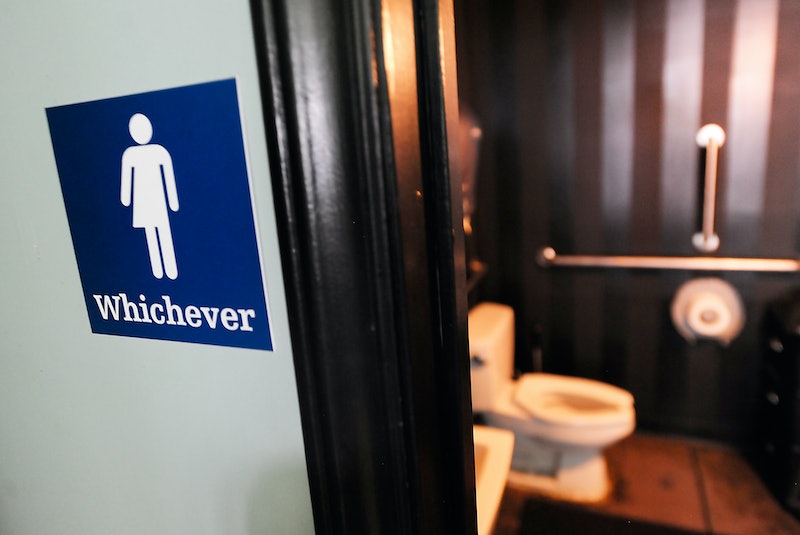 In April, Gavin Grimm, a transgender student from Virginia, won a huge victory for trans rights when he and the ACLU fought the Gloucester County School Board over its policy that trans students need to use separate bathrooms. But this was only a federal appeals court decision. Now, his Virginia school district is fighting trans equality all the way to the Supreme Court. The district's school board decided to proceed to argue the case because they claim Grimm's use of the boy's restroom causes "irreparable harm to the Board, to the school system and to the legitimate privacy expectations of the district's schoolchildren and parents alike."

Gloucester County School Board, in an emergency application released on July 13, asked the court to issue a stay and halt the enforcement of the appeals court ruling in the meantime. In other words, they don't want Grimm, who is 17 years old, using the bathroom before there's final word from SCOTUS. They made the same request to a federal appeals court which was denied on July 12. This time, five justices would have to agree to intervene, but only if the matter is referred to the full eight members of the court. Reuters reported that the application was addressed to Chief Justice John Roberts, which means he could also act alone.

If Roberts did grant a stay, that would not necessarily mean the case is going to be taken on by the full court. Four justices must agree to grant a case certiorari; in other words, they would review the ruling of the lower court. If certiorari were granted, Roberts' stay could last until a final decision from SCOTUS in June 2017. On the other hand, if Roberts granted a stay and the court decided not to review the case, it would be nullified. There may be enough support to grant certiorari; it would depend on whether Justice Kennedy, seen as a friend of gay rights, would also be supportive of trans rights.

The workings of the court are a bit complicated, but the Virginia district's argument is not. The suggestion that one student using a bathroom could harm a school board, school system, children, and parents may seemed far-fetched, but that is the crux of the Gloucester County School Board's argument. They say it "puts parents' constitutional rights in jeopardy." Lawyers for the district wrote:

Depriving parents of any say over whether their children should be exposed to members of the opposite biological sex, possibly in a state of full or complete undress, in intimate settings deprives parents of their right to direct the education and upbringing of their children.

They also argue children may be pulled out of school and that it's always been this way, which tends to be a failing argument when speaking about injustice. "No one ever thought this was discriminatory or illegal. And for decades our Nation's schools have structured their facilities and programs around the sensible idea that in certain intimate settings men and women may be separated," the lawyers wrote.

The ACLU, on the other hand, has showed its solidarity with Grimm. Executive director of ACLU-VA, Claire Guthrie Gastañaga, said in a statement that the organization would have his back, protecting him from such indignities. "It is sad that the school board members and their lawyers have so little regard for the impact their misguided actions are having on a real teenager's life," reported. Joshua Block, a lawyer for the national chapter of the group, concurred in The Washington Post. "The notion that simply allowing one boy to use the restroom during his senior year of high school would cause the sky to fall is impossible to take seriously," he said.

For Grimm, the best solution would be Roberts denying the stay directly or sending the matter to the whole court. Let's hope he can focus on college during his senior year — not on finding a safe place to use the restroom.