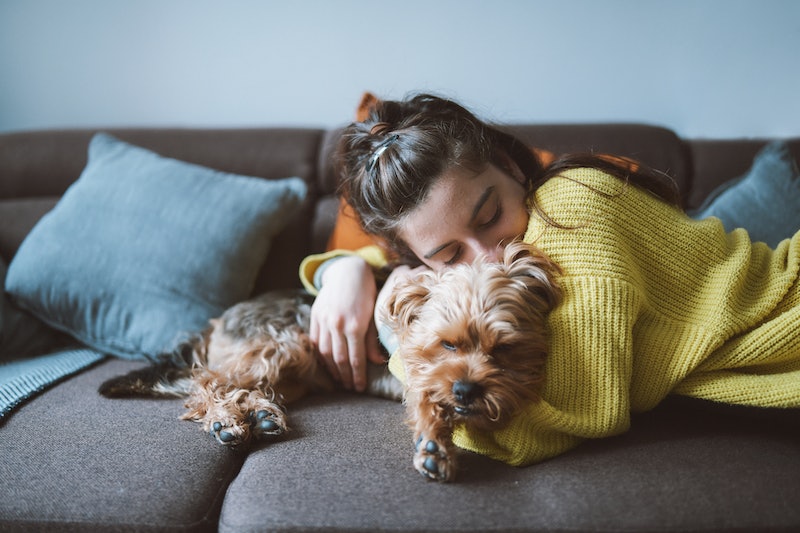 The stereotype about psychoanalysis is of a person on a couch being asked about their mother; but behind the cookie-cutter image, it seems that your experiences as a child, and specifically how your parents or main caregivers interacted with you as an infant and a kid, can have significant consequences for the relationships you have in your adulthood. It's logical; after all, kids are sponges, and the lessons we learn can profoundly shape how we grow. But there's a particular theory about the parent-child relationship that focuses on how attached we feel and how it impacts on our future. It's called "attachment theory," and it's both fascinating and extremely insightful. Your attachment style might be impacting your relationship more than you think.

There's an important caveat to this: attachment theory is just a theory in developmental psychology, and it's had its criticisms. (It's mostly focused on parents, for example, and some experts argue that peers have a big role in how we grow up too.) But it's also been hugely influential in developing a vocabulary for how we relate to other people, particularly in the context of our childhood relationships and our adult romantic connections. You don't have to take it as an absolute, but it can be a very useful shorthand to help understand why somebody seems to be acting in a peculiar way in an adult relationship.

Here are the basics behind attachment theory. They might help you understand why you, a partner, or a friend seems to make strange decisions related to their intimate attachments.

What An Attachment Pattern Is

Attachment theory and the idea of "attachment patterns" are basically all about the security of our attachment to our main caregivers as children. The idea came from the British psychoanalyst John Bowlby, who started to talk in the 1960s about how distressed infants became when they were separated from their caregivers, and how reassured they were when they were reunited. Bowlby noticed that the infants that reacted like this came from species where babies are pretty helpless and dependent on adults, and realized that humans in particular prioritize good "attachment" as babies: we want our caregivers nearby and if they're not we often freak out.

But the idea of attachment patterns themselves came from Bowlby's college Mary Ainsworth, who did a long series of experiments with different children and parents, and realized that there are fundamental different "patterns" that develop in how they attached to one another. If parents could reassure their kids and provide a secure environment, they'd form a "secure" attachment; if for some reason that attachment failed, the attachment would become "anxious" or "avoidant." And those patterns could carry over from our relationship with our parents to our relationships with others in adolescence and adulthood.

Ainsworth's most famous experiment about this was done in 1969, and was called the Strange Situation. In it, parents were briefly separated from their children. Kids with secure attachments would become upset when their parents went away for brief episodes of three minutes, but be immediately soothed and go towards them when they came back. Some kids, though, couldn't be soothed, and kept wailing even if the parents came back; and others showed distress by ignoring their returned parents entirely and looking at other things. Those last two were anxious and avoidant, respectively.

The anxious and avoidant kids also had different relationships with strangers who were introduced into the scenario with and without the parent around. Secure kids were wary of them without their mom, but OK with them once the parent had returned; but the anxious ones would avoid them all the time, and the avoidant ones would play with them just as much as they did with their own parents.

The 4 Types Of Childhood Attachment Styles

According to attachment theory, there are several types of attachment that can be formed with children, all when the kids are between six months and two years old. Psych Alive lays them out: secure attachment, avoidant attachment, ambivalent or anxious attachment, and disorganized attachment.

Secure attachments form when the child feels completely safe with their parent, uses them as the prime way to soothe themselves when they're upset, and uses them as a "secure base" as they begin to learn about the world, perpetually returning to them to reassure themselves and feel confident.

Anxious attachments form when a child gets a bit confused about what kind of reaction it's going to get from a parent; sometimes it might be loving and soothing, but sometimes it might be aggressive, uncaring, or in some way untrustworthy. "Parents who are inconsistently available (or consistently unavailable)" the Science Of Relationships explains, "teach their children that others cannot be fully trusted or counted on for social support, and that closeness and intimacy in relationships is dangerous." The kid can't rely on its parent and becomes, on some level, deeply worried.

Avoidant attachments form when parents are basically completely unreliable or absent, and don't form a secure attachment at all; they might not encourage emotion, and want the kids to be little "adults" as soon as they can. The infants react by distancing themselves from something that clearly can't be counted on.

The worst kind is disorganized attachment, in which the child experiences abuse but is obviously powerless to get away. If a parent or caregiver is terrifying or abusive, kids face the dilemma of requiring somebody to care for them and knowing that the person in question is dangerous. Most children in this situation dissociate; one experiment showed that they might walk towards the caregiver if they'd been away, but with their heads turned away from them.

How Childhood Attachment Affects Your Relationships As An Adult

Insecure attachment styles can wreak havoc on adult relationships, as we carry the models of security and trust we learned from our parental figures into our interactions with other people, particularly in situations of intimacy and trust. It's not all about other people, either; a review of studies in 2009 found that people who'd experienced insecure attachment were much more likely than "securely attached" people to develop depression as adolescents.

Obviously, the psychology of a romantic relationship is not the same as a parent-kid relationship. But closeness and trust are a key part of love, and research indicates that, at least in some cases, the attachment styles we develop as children can directly influence our adult relationships. It's not the case for everybody, and adult attachment styles can develop on their own independently of childhood experiences, but it seems that for some people the lessons learned are not easily forgotten.

The 4 Types Of Adult Attachment Styles

Secure people don’t have an issue with trust or attachment; they’re easily reassured by partners, and are able to live as individuals in romantic relationships without feeling excessively vulnerable or shutting people out. The three other types, though, aren’t exactly gold medallists at relationship behavior. The anxious-preoccupied partner has an anxious attachment style, in which they constantly worry about their relationship and their partner and need almost-24 hour reassurance. Their behavior, Psychology Today explains, demonstrates an “emotional hunger,” exhibited as becoming “clingy, demanding or possessive.”

The dismissive-avoidant and fearful-avoidant partners are both working off the unconscious idea that it’s safer to push people away, and that emotional needs always come second to safety and a sense of security. Both will likely still pursue partners, but will enact what Dr. Hal Shorey calls the “come here-go away” paradox: they seek romantic connection but can’t handle it at the same time. People who are dismissive-avoidant tend to be the cool, calm independent types who always avoid commitment or emotional connection; Psych Alive characterizes them as “loners… [who] regard relationships and emotions as being relatively unimportant. They are cerebral and suppress their feelings.” Fear-avoidant partners, meanwhile, both desperately want a secure relationship and are terrified of what will happen when they’re in one. They tend to be in chaotic, dramatic relationships and to act inconsistently towards partners.

The good news? You can actually change your attachment style, but as the therapist Darlene Lancer explains for Psych Central, it'll likely take a lot of professional help and some serious self-assessment. We may have learned some bad lessons from our parents, but we don't have to be stuck with them forever.

More like this
50 Valentine’s Day Instagram Captions To Post If You’re Single
By Jessica Booth, Lexi Inks and Carolyn Steber
18 Hinge Prompt Answers To Try If You’re Looking For Something Casual
By Lexi Inks
31 Ways To Celebrate Valentine's Day With Your Long-Distance Love
By Natalia Lusinski and Carolyn Steber
30 Sweet Valentine's Day Caption Ideas For Long-Distance Relationships
By Syeda Khaula Saad and Carolyn Steber
Get Even More From Bustle — Sign Up For The Newsletter
From hair trends to relationship advice, our daily newsletter has everything you need to sound like a person who’s on TikTok, even if you aren’t.