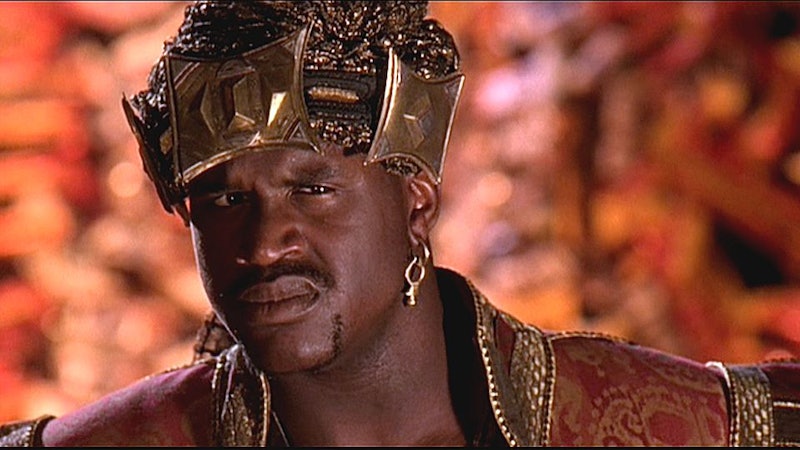 The movies of our youth are not necessarily the movies that we’d choose to watch as an adult, but there’s something about the nostalgia that leaves even the worst films as little bits of warm fuzziness in our hearts. One of those movies for me is Kazaam, the Shaquille O’Neill-led rapper/genie/what is this even about film that came out a whopping 20 years ago today. Can you believe it? It was a movie my older male cousins always wanted to watch, and I think I’ve seen Kazaam like 50 times. Is it bad? Oh, yeah. But is it so bad that it’s good? Absolutely. Kazaam never got the praise that Space Jam got, but for me, it reminds me of grilled cheese and grape juice and stirrup leggings, and for that, I am thankful. But even though I’ve seen it so many times, there’s actually a lot I don’t know about Kazaam.

If you’ve never seen the movie, you’re probably not a child of the 1990s like I am, so I’ll give you a little prep course: Shaq plays Kazaam, a genie that has been locked up for thousands of years. One day, Max, who is on the run from a local gang, frees the genie, and Kazaam does the whole thing where he explains about the three wishes and yadda yadda (everyone knows that you get three wishes with a genie). All Max wants, though, is to see his father, who is absent from Max’s life. Max’s mother finally confesses about his father’s whereabouts, he sees him, and Max makes some more wishes with Kazaam, but things get stick when Malik, a friend of Max’s dad, realizes that Kazaam is a genie and wants to take advantage. Kazaam gets promised a professional rapping career, and he loses sight of Max, his master. Malik attacks Max; Kazaam attacks Malik, and, long story short, they mostly live happily ever after. It’s all about knowing what you have and embracing it, people.

Now you know the plot, but let’s see what else there is to know about the movie Kazaam.

1. You May Recognize The Director

Paul Michael Glaser, the director of Kazaam, was a big television star in the 1970s — he played Detective David Starsky on Starsky & Hutch, which ran on ABC from 1974 to 1979.

2. The Movie Was Born From A Tragic Event

When Glaser’s wife, Elizabeth Glaser, died in 1994 from complications from AIDS, Glaser was devastated and vowed to throw himself into a creative outlet. It was then that he was asked to make a movie with Shaq, and the rest is history.

3. Shaq Had Always Dreamed Of Doing A Movie

Shaq had already made millions as a basketball player, but he had one dream left — making a movie. When GQ magazine asked him why he did Kazaam, Shaq said, "I was a medium-level juvenile delinquent from Newark who always dreamed about doing a movie. Someone said, 'Hey, here's $7 million, come in and do this genie movie.' What am I going to say, no? So I did it." Fair enough!

Gene Siskel named Kazaam as one of his least favorite movies of 1996, and although Roger Ebert didn’t put it on his list, he said, “Kazaam is a textbook example of a film deal,” Ebert wrote, “in which adults assemble a package that reflects their own interests and try to sell it to kids.” Ouch. It currently holds an 6% rating on Rotten Tomatoes.

When Francis Capra landed the role of Max in Kazaam, he always already used to working with big stars — in more ways than one. He had just finished filming A Bronx Tale with Robert De Niro, and he was also in Free Willy 2 with a giant orca whale. Perhaps Shaq was just like all the other stars Capra had acted with.

6. The Screenwriters Almost Had Turtle Power

Roger Soffer and Christian Ford, who wrote Kazaam , didn’t really get along, but they were hired at first to write a film that was tentatively called Teenage Mutant Ninja Turtles: The Next Mutation, which would have been the fourth movie in the TMNT series. Luckily, the world didn’t need that movie, and it was scrapped due to problems between the creators.

7. Capra Didn’t Know Who Shaq Was

In an oral history of Kazaam, Capra said, “I was the most non-athletic kid in the world; I thought Shaq was a football player at the time.” Luckily, he was able to figure it out before he and Shaq met.

And when Capra and Shaq did meet, the conversation turned to one of the most famous 1990s games of all time — Mortal Kombat. So much of Capra and Shaq’s conversation revolved around video games that Shaq gave Capra a copy of Shaq-Fu , his own Sega game, to take home with him.

I feel much more educated about Kazaam now, don’t you? Excuse me; I’m off to find a genie of my own.