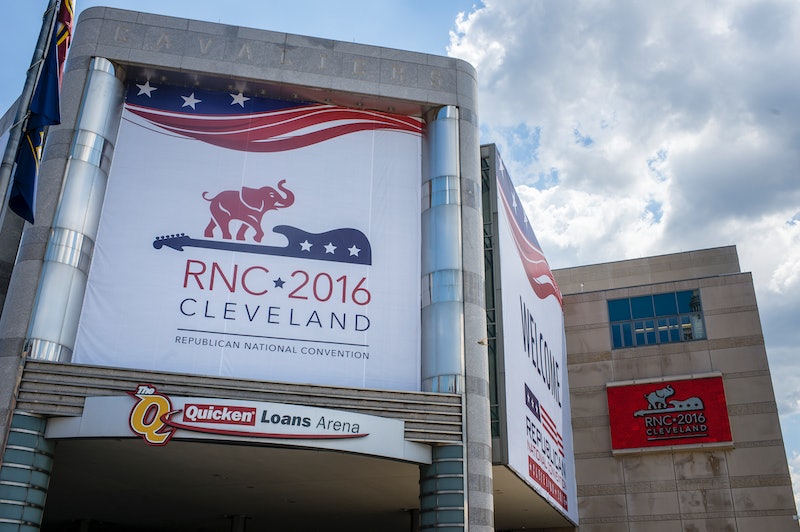 Not unlike refried beans leaking out of a badly wrapped burrito, details have finally begun emerging about the speakers at next week’s Republican National Convention. The New York Times reported Thursday that it had obtained and confirmed a partial lineup for the Trumptastic nominating conclave, which features a bizarre mishmash of politicians, sports figures, businessmen, and, of course, the Trumps. At first blush, the list of speakers and themes might appear standard for a campaign that has brought us within a ballot’s distance of a wall along the Mexican border. But much like the priests at Delphi interpreting the Oracle’s mumblings, grappling with the full implications of #TrumpCon2016 requires a deeper, subtler reading of the text.

Monday Night Is Going To Be All About Fear

According to The New York Times, Night 1 will have a “Benghazi focus” and will feature speeches from border patrol agents and Jamiel Shaw Sr., whose son was slain by an undocumented immigrant and is a Trump supporter. This is all code for BE AFRAID, said in a very loud whisper. This first night will also feature, among others, Rudy Giuliani, who has been doing great work for the cause in recent weeks by claiming, among other things, that he’s saved more black lives than Black Lives Matter.

We Get To Hear From At Least Six Trumps

Donald is proud of his family — what egotist wouldn’t be proud of the fruit of his loins? — and as part of what I can only expect will be a four-day showcase of his narcissism, we’re going to get to hear from six Trumps. Donald (obviously), wife Melania, daughter Ivanka, sons Eric and Donald Jr., and 22-year-old Tiffany Trump are all slated to speak. Prepare yourself for some profoundly humanizing anecdotes about the Donald, like how he always leaves the seat up (Melania!) or how he’s always saying weird things when her friends are around (Tiffany!). Fingers crossed that this ends up being more useful to network executives looking to pitch a post-election Palin-style reality show than actually helping Donald connect with the nation.

We’ve known for a while that neither former living Republican president nor the two most recent Republican nominees would be attending the convention — 1996 GOP and Viagra spokesperson Bob Dole will be in attendance, but he doesn’t appear on any speaker list. However, there are a few more new absences that seem glaring — perhaps most notably former running mate and helicopter-wolf-huntress Sarah Palin, who endorsed Trump back in January. Also absent? Alleged football deflator Tom Brady, who flip-flopped on his Trump endorsement last fall.

Of course, any manner of changes could take place over the weekend, and at this point, even a repeat performance of Howard Stern’s Fartman from the MTV Video Music Awards in 1992 wouldn’t really surprise me. The only thing that’s certain: Make sure you stock up on wine.

More like this
Celebrities & President Biden Are Enraged By The Leaked Roe v. Wade Decision
By Alyssa Lapid
Dinner To Celebrate Diversity In Journalism Brings Out Media Leaders
By Brianna Kovan
President Zelensky Spoke Out On Ukraine's Chances Of Hosting Eurovision Next Year
By Sam Ramsden
Michigan’s Governor Is “Going To Fight Like Hell” To Protect Abortion Access
By Andrea Zelinski
Get Even More From Bustle — Sign Up For The Newsletter