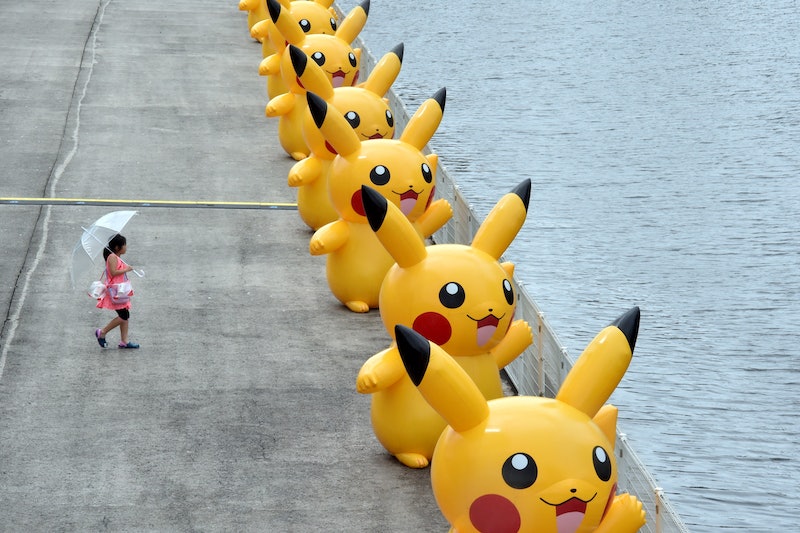 It's not much of an exaggeration to say that "Pokemon Go" has taken over the Internet, one '90s kid at a time. If you're not already obsessed, you probably will be soon, but before you begin your journey to become the very best, there are some "Pokemon Go" etiquette rules you might want to learn. The augmented reality game's addictive nature is both a blessing and a curse: Like many internet sensations, it's ridiculously easy to lose track of the real world when you're playing "Pokemon Go." Unfortunately, the game actually takes place in reality, so getting lost in a Pokemon hunt can have consequences outside the game.

Usually, this is a good thing; many players have praised "Pokemon Go" for getting them out of the house and wandering around areas they wouldn't have explored otherwise. It's taken people to national landmarks, odd holes-in-the-wall, and into the middle of bodies of water — but at the same time, players have broken into buildings, pulled up the game at inappropriate places, and gotten fired in their pursuit of Pokemon. Of course, the game has only been around for a week, so it's not exactly surprising that there have been some growing pains, especially considering it's arguably the first augmented reality game to gain widespread popularity.

That being said, it's pretty easy to avoid being the Gary Oak (ugh) of your area. Here are some tips for playing "Pokemon Go" without annoying everyone around you.

It seems obvious, but there’s a reason “Pokemon Go” reminds you to be aware of your surroundings every time you open the app. For your own sake and that of everyone around you, keep an eye on where you’re going, and don’t block the sidewalk. Most importantly, don’t play “Pokemon Go” while you’re driving. Just don't. Seriously. I mean it.

Although it might feel like it, not everyone in the world plays “Pokemon Go.” You can see what’s on your screen, but other people can’t. You might know that you’re just trying to catch the Magicarp next to some lady’s feet on the subway, but to her, it looks like you’re pointing your phone straight in her direction. If there’s a stranger in your shot, you have two options: Wait for them to move, or turn off AR temporarily so you don’t have to aim directly in the stranger’s direction.

This is even more important when you’re taking a photo. If you simply have to take a pic of a Pokemon while someone else is in the shot, make sure there’s no identifying information – or better yet, turn off AR so the real-word background isn’t visible.

3. Keep Your Names Safe For Work

Remember how old you were when you started playing Pokemon back in the day? You might be older now, but kids still play the game, too – which is why you should keep the names of your character and Pokemon safe for public consumption. When you set a Pokemon to guard your gym, you don’t want children coming across something they’ll ask their parents about later.

4. Be Aware Of Your Surroundings

This time, I’m not talking about looking up from your phone every so often (although you should definitely do that). I mean you should take your environment into account before you pull out your phone – don’t be the dude who captured a Pidgey while his wife was in labor, or the person who hunted Pokemon at a funeral, or the guy who got fired for playing at work, or – well, you get the idea. If you’re in a place or an event where your mom would have snatched away your Pokemon cards as a kid, don’t whip out “Pokemon Go” as an adult.

Once again, “watch where you’re going” makes an appearance: It should go without saying, but don’t trespass on private property when you’re out hunting Pokemon. It might not end well.

6. Try To Patronize Businesses Where You Catch Pokemon

If you burst into a place of business only to spend 10 minutes tossing virtual Pokeballs in corners and generally making a scene, you should probably buy something, even if it's just a cup of coffee or what have you. “Pokemon Go” may be good for businesses that happen to be Pokestops, but have some mercy on the poor employees who have to deal with players running in and out all day.

7. If You’re Taking Over A Gym, All Bets Are Off

Of course, all of the above rules are meant to apply to the real world – when it comes to the game itself, things are a little different. As a friend and absurdly advanced “Pokemon Go” player explained to me, “[Gyms are] a lawless, dog-eat-dog Thunderdome. Only the strongest Pokemon stay in gyms, and sniping an open gym away from someone who just cleared it out is sanctioned.”

Of course, it’s worth noting that you’re not likely to make friends with a Machiavellian approach to the game. Just remember that it is a game – rather than obsessing over being the very best, maybe focus on the fact that you’re living out your Pokemaster fantasies in the first place.