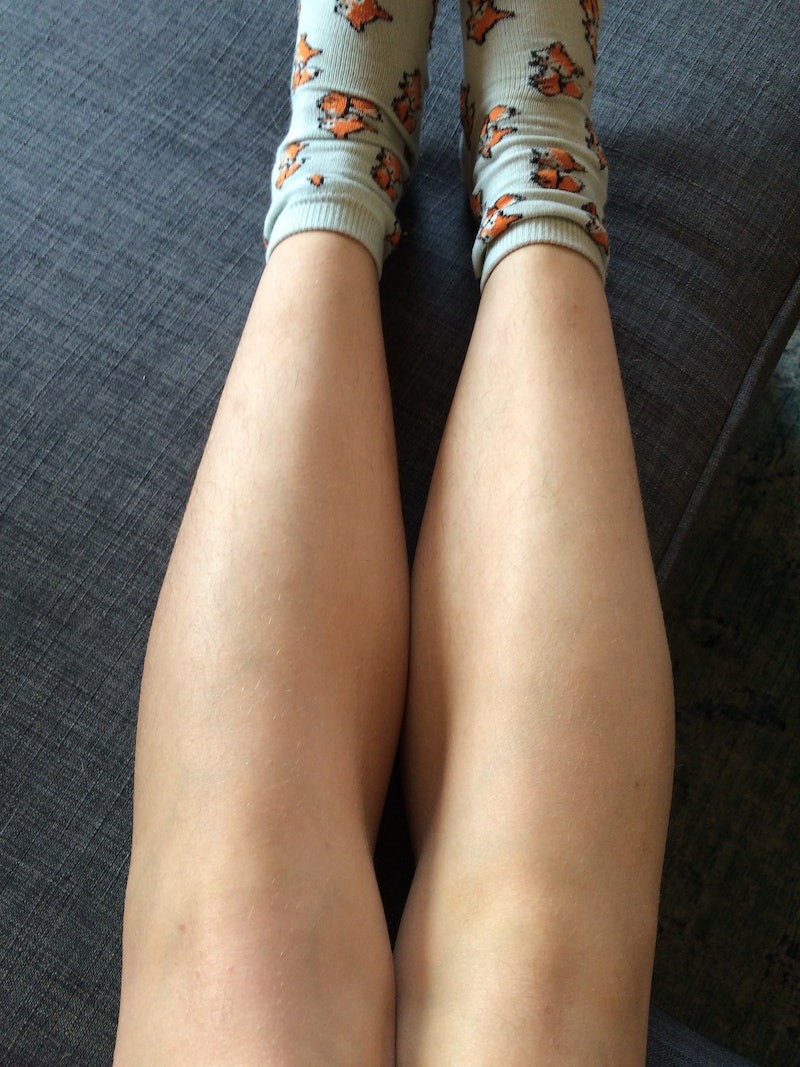 Hair removal and I never got along when I was growing up. Even when pressured by friends and family alike to start shaving my legs, I just wasn't interested. Surrounded by so much body negativity, I didn't fully realize at the time why it might be that I deplored the razor. I wasn't cognizant of the fact that I had a genuine desire for a fuzzier look, especially since such an aesthetic was pretty universally condemned by girls in my grade. I just knew that it seemed like an unnecessary hassle and that, once I tried it, shaving was basically the worst.

Regardless of my motives for not shaving, friends told me that I might be depressed. The standards for how a girl "should" maintain her body (hair included) can be absolutely toxic to many impressionable young women. But the message felt especially lost on me. See, I never felt like a girl, even though I wouldn't say it out loud for quite some time. Thus, folks pressuring me to conform to feminine standards didn't realize I didn't want to be a woman, anyway.

But as I've grown older, my relationship to body hair as a gender nonconforming individual has become even more complex: My patchy leg hair growth is "too masculine" for cis circles, but "too feminine" for queer ones. And so, my leg hair has become a manifestation of never quite feeling like enough.

I would be a “cis girl” for the next eight years after that first shave, so my refusal to conform repeatedly brought attention to my unshaven legs. I began doing everything I could to conceal my limbs: Wearing pants or tights in the summer heat, tucking my legs under my butt when hanging poolside and swimsuit-clad with pals, and hiding my hairy stems in bed when in the company of lovers. No matter how satisfied I was with my fuzzy aesthetic, I didn't feel I could publicly embrace it until I came out as gender nonconforming.

Once I went away to college and became surrounded by folks who were a bit less body shaming by conventional standards, the comments began to change. I'd often hear that my leg hair was so fine and light that I appeared shaven regardless. But as someone coming into their masculinity, embracing men’s clothes, and ditching the razor for good, this did not feel like a compliment. Spending time with unshaven queer feminine folks with thick, black leg hair made me insecure about my own — as though my legs weren't as masculine as they should be.

Once out and a part of an unshaven queer community in my late teens and early 20s, I realized what the intersection of my insecurities were and why they created such complicated feelings around my leg hair. Around cis people, my legs are something to gawk at (something I'd gotten a little better at dealing with). Around queer people, however, I was deemed too feminine to "bother" keeping my legs hairy.

The thing is, my body hair is a huge part of my masculinity — of the choices I make that affirm and manifest my gender identity. So when someone asks, “What's the point in keeping it? You can hardly see it anyway,” they inadvertently make me feel uneasy in my body.

I want so badly to grow my hair in darker and thicker. I don't want breasts. And I often dream of having a penis to replace the feminine genitalia currently residing in between my legs.

So even if my hair is light, fine, and non-existent on certain parts of my legs, I want to be comforted in believing that it is still as masc and badass as I am. I know that hair isn't everything. It isn't my gender and it doesn't have to define me. Nonetheless, it can feel as though my legs constantly have to be the center of discussion for both the cis and queer communities alike — and never in a positive way.

These days, however, I actually take solace in the ignorant comments made by so many people. The shocked expressions and rude questions from cis people, like “when is the last time you shaved?” only further fuel me. As they look at me as some sort of outsider — seemingly feminine in body (at least judging by the boobs) but masculine in my leg hair — I feel such satisfaction. Sure, these folks may not mean well. They may see my masculinity as rebellious or shocking or even disgusting. But — as with queer communities — at least they're seeing my masculinity.

As folks make their impolite comments, I am free to revel in my manhood: A manhood that gets thrown at me simply because I don't own a razor. But a manhood that is being acknowledged, regardless of the gender I was assigned at birth.