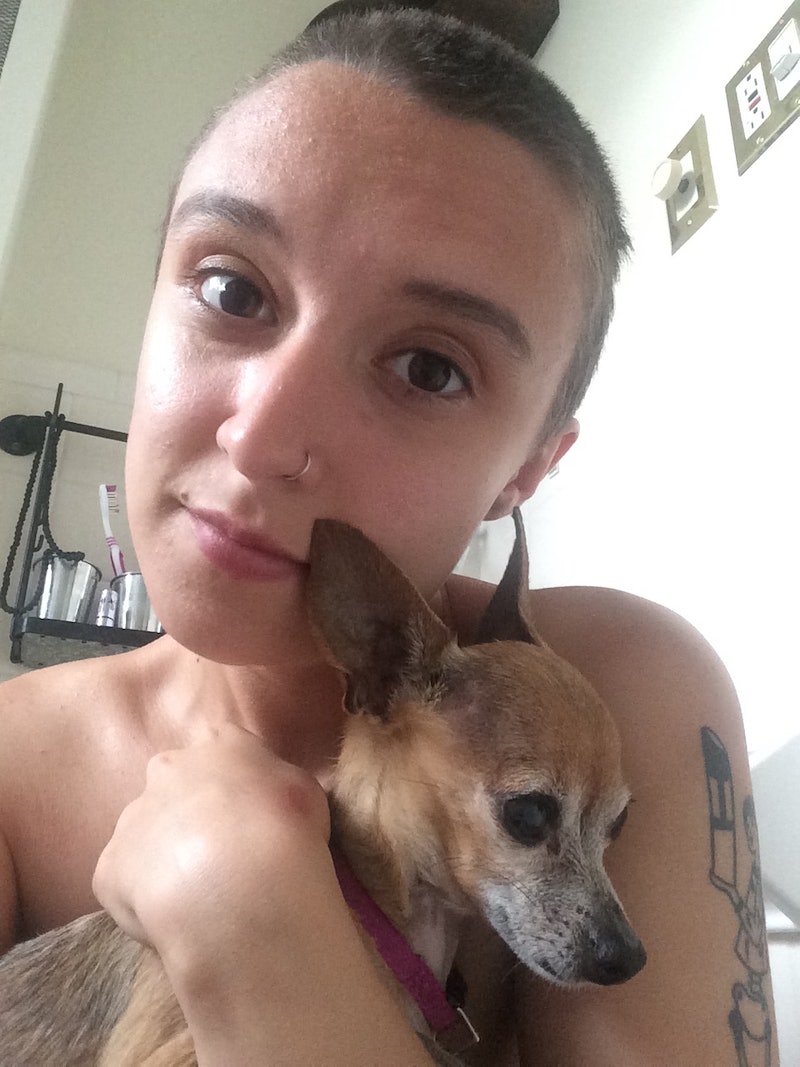 Since coming out as gender nonconforming a year ago, navigating certain social situations has proven tricky. This isn't uncommon for the trans community as a whole, since many of us deal with insensitive comments (whether meant maliciously or not) about our identities and presentations on the regular. Much of the time, such remarks come from our friends and family — who often have our best interests at heart. But if you're unaware of some of the basic ins-and-outs on trans and GNC identities, it can be quite easy to offend someone in the effort of paying them a compliment nonetheless.

Some things my cisgender friends tell me with the intention of sounding flattering are so clearly inappropriate that I usually have to chuckle about them with my partner. But for the sake of friendship and my sanity, it's probably best to make my loved ones aware of some of the do's and don'ts associated with complimenting me, or any gender fluid person.

While such slip-ups can be amusing at times, they can also ruin my day based on my mood or the nature of the "compliment." As with my gender pronouns, however, it is usually incredibly difficult to correct someone in the moment or call them out.

So in an effort to quell everyone's anxieties, and to hopefully give myself and my community greater peace of mind when chilling with friends, here's an easy-to-digest list of some backhanded compliments many gender fluid people are likely tired of hearing.

Unless you know the person really well, and the person in question has vocalized to you how much they prioritize passing, please try to avoid this one altogether. For starters, it's a bit condescending — not unlike simply saying, "Wow, I'm so convinced that you're the gender you identify with!"

Comforting someone with your approval of their gender and presentation can also be triggering for those who are very self-conscious of whether or not they pass. Most of us are just trying to be (and love) ourselves: We're not generally looking for a medal for "properly" performing the gender we identify with.

Additionally, not everyone is trying to pass. Many gender nonconforming people are satisfied with looking neither male nor female as per binaristic standards, as that is the nature of gender fluidity. Sure, on some days I want to look like a boy and do my best to achieve that with my style. But it feels like a snobbish pat on the head when someone is all, "Good job, you look like a real boy." What if I'm neither male nor female? What if my presentation doesn't correlate with my identity?

Trust me: It's safer to strike this from your repertoire of compliments altogether. It can get messy, fast.

As with any of these compliments, there is a certain level of subjectivity based on the person or situation. But ultimately, please try not to use compliments associated with femininity if your friend is clearly feeling more masculine, or vice versa.

My entire body cringes when someone calls me "pretty," particularly when I'm clearly indicating feeling masc through my clothing choices. As a trans person who falls more on the masculine side of the spectrum, I abhor the P-word. It often makes it feel as though my identity is being purposefully overlooked and improperly categorized.

Personally, I try to use "beautiful" for everyone, since I interpret that word as a gender-neutral descriptor. However, since not all of my friends agree with this sentiment, I don't use it with every person in my life in an effort to respect their gender and personal wishes.

Don't be afraid to ask your friend, relative, or acquaintance what types of adjectives they prefer. They'll likely appreciate it immensely, and it will save you a lot of awkward slip-ups down the line.

There's almost never a situation in which I wouldn't take this as a compliment. But when it's in regards to my gender identity or presentation, it can come off as a little strange — like the person is trying way too hard to express their approval of my fluidity.

When I came out to some of my straight female friends, a few of them became super flirty with me (especially when I presented masculinely) and told me they'd date me since I "make such a hot guy." Since these folks are my pals, their reactions were nothing short of unsettling.

The thing is, it can be creepy to compliment your platonic friends by coming onto them so strongly, especially if it's only when they're presenting masculinely or femininely. To me, this can feel as though my identity has been made into a sexy fetish, when all I wanted was to come over to drink some wine and vent about my week. It also makes me feel like the feminine part of myself — the part I'm already so at odds with — just isn't valuable to the friends who make such statements.

Please, spare your loved ones the discomfort. We get it, you accept us. Now let it go. Bonus awfulness points if you say, "I'd totally date you... if only you had a penis/vagina." Like, thanks for reminding me of my gender dysphoria, y'all.

4. "You look so good in (insert traditionally gendered item here). You should wear it more often."

These are the sorts of compliments I receive predominently from older family members who are either unaware of my identity or particularly ignorant to what's acceptable to say to trans people. When coming from relatives, such comments usually manifest in the form of something like, "You look so much nicer in dresses; you really should wear them more often!" From my friends who are more in the know, I also hear things like, "You look amazing in bold lipstick. I wish you wore it more frequently," or, "Wow, you look incredible in that men's shirt. You should wear it all the time!"

Though the latter is at least acknowledging of my masculine identity, none of these compliments feel particularly great. All of them make me feel as though I'm being pressured to stick to a certain gender presentation, which is frustrating because choosing a presentation every day is oftentimes tricky as it is, sans the addition of having to worry about the aesthetic preferences of others.

Instead, tell me I look amazing in my dress or my men's shirt, but please don't follow that up with a statement meant to push me to rock men's or women's clothes exclusively.

Since I'm assigned female at birth, I luckily don't deal with this one often. But every single transfeminine or gender nonconforming person AMAB who I know has encountered it at least once, both IRL and in their Instagram comments.

Saying this to your makeup-wearing friend, especially when you're AFAB and they're AMAB (which is often the case when it comes to this brilliant comment) implies that one's sex or genitals automatically make one more qualified to handle makeup. This simply isn't true. Everyone can use and apply cosmetics, and there are obviously certain individuals who are better at it than others (depending on one's subjective view of what's better, anyway).

By expressing surprise over the fact that your friend has mad skills with the makeup brush, however, you're more likely to insult them. So why not just say, "Your wing is flawless," or, "Your contour is out of this world," instead?

6. "Your breasts are amazing/that beard is super sexy!"

It's also important to keep in mind what parts of their body your friend might feel dysphoric about. I've had plenty of buddies draw way too much attention to my breasts in an effort to make me feel sexy or good about myself. But since I don't identify with my boobs much, and have repeatedly considered top surgery, this comment just makes me feel extra self-conscious.

Similarly, my partner once had to go grow out a thick beard for a play they were in — something they resented since facial hair can often feel strange juxtaposed against their feminine identity. Yet friends and family unknowingly worsened the discomfort by urging Skylar to keep it. Of course, they did look great (as they do in most looks). But what mattered most was how uncomfortable the beard and subsequent commentary made them feel despite this fact.

In sum, know your audience and the preferences of your friends.

7. "Wow, I can hardly tell that you have breasts/a penis."

To clarify, compliments revolving around genitals or breasts directed at people you don't know well enough or aren't sleeping with are most often a big no-no. This is especially true for trans people, who usually don't want to be reminded of the gender they were assigned at birth or the fact that they wish a certain part of their body was invisible.

These comments can be just as invasive and even transphobic as when folks less in the know straight-up ask about what's in someone's pants. Usually, a trans person's relationship with their genitals or breasts is complicated, especially if they're making efforts to conceal those areas. Ultimately, these types of comments can act as tools for re-traumatization rather than flattery.

To all you queer/trans allies out there: We know you mean well. But before you deliver another compliment to your trans or GNC buddy, try to interrogate whether or not your statement might be triggering for them. If the compliment you want to make has made it to the list above, odds are you're better off using more gender neutral vocabulary instead.