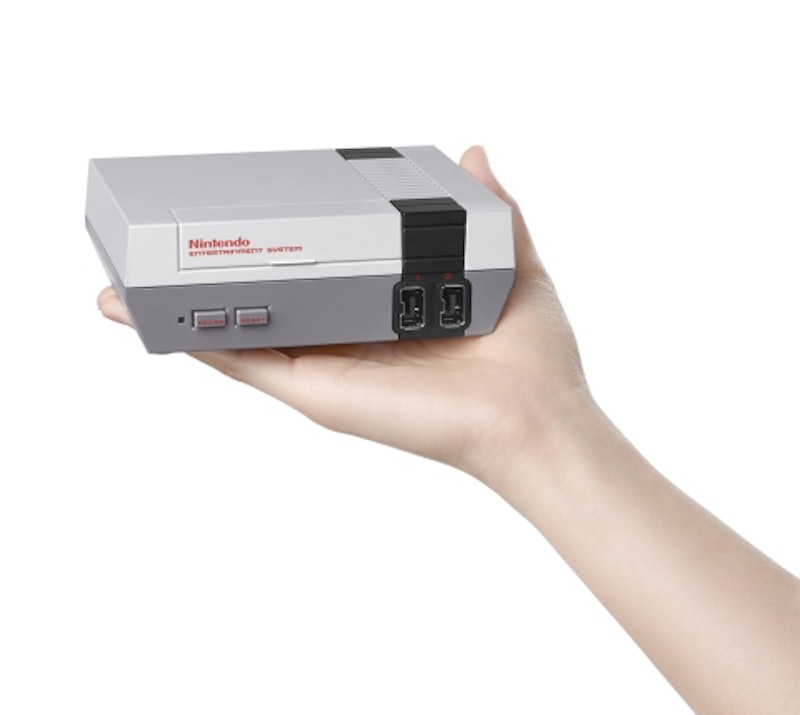 Nintendo is having a big week. Shares in the company have gone up by 50 percent since “Pokemon Go” took over human civilization, and it’s just been announced that Nintendo is releasing a miniature NES. If you’re wondering, “How much will the Nintendo miniature NES cost?” — or simply “How much do I have to pay to pretend I never left 1991?” — look no further. These nostalgia machines, officially known as the “Nintendo Entertainment System: NES Classic Edition,” will have a suggested retail price of $59.99. That’ll include the gaming system, an HDMI cable, an AC adapter, and one controller. Additional controllers will have a suggested retail price of $9.99.

Not bad, right? I remember that when my family got an NES (in 1990 or 91), it felt like a major investment. By early ‘90s standards, those machines were not cheap, and my sisters and I unpacked the box and tried out our only games — Mario Bros. and Duck Hunt — with reverence. (Before long of course, we were blowing into and tapping and shaking our game cartridges to making them stop skipping). Obviously, the games weren’t cheap either, and usually we’d have to rent them from the video store if we wanted to try out something new. (FYI, “We had to rent games for our NES from the video store” might just be the most ‘90s thing I’ve ever written).

So less than $60 for this new mini version seems pretty reasonable, especially because it comes preloaded with 30 games, including the first three Super Mario Bros., Donkey Kong, The Legend of Zelda, and (my favorite of favorites) Dr. Mario.

The only thing that’s missing from this rerelease are Duck Hunt and the NES Zapper, but I’m willing to give up nostalgically shooting digital ducks while standing 6 inches from my TV screen in exchange for unlimited Dr. Mario. (Have I mentioned that I loved Dr. Mario?)

The NES Classic Edition will hit stores November 11, so you have just under four months to get your thumbs in shape for some old-school NES marathons. Better start training early, kids.