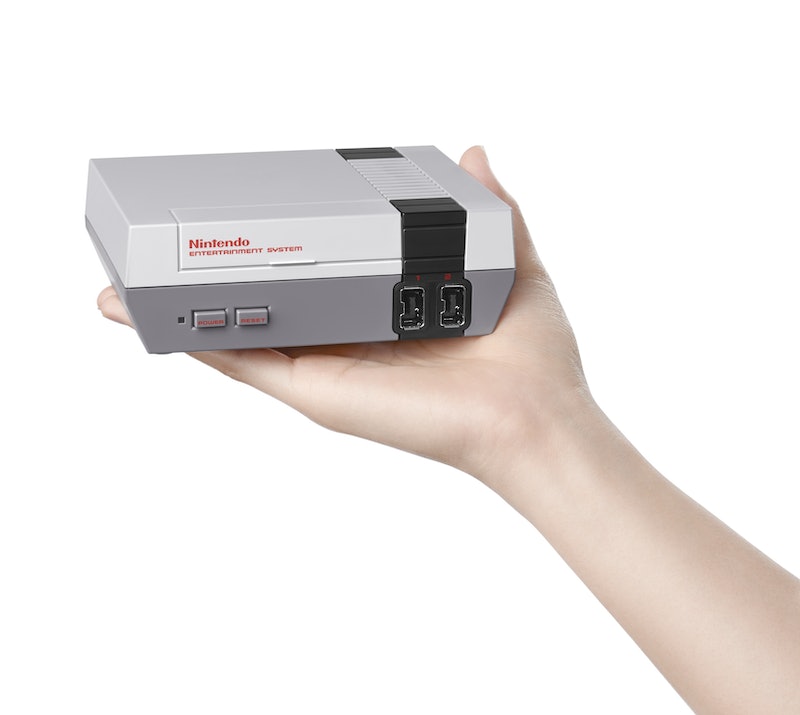 Since we all can agree that between the Blink-182 release, the Clinton campaign, and the world's unbridled enthusiasm for "Pokemon Go" that we collectively fell into a worm hole in time this past week, it's only fitting that Nintendo is releasing a miniature NES to bring us all full circle. The Nintendo Entertainment System: NES Classic Edition, a miniature replica of the NES console of gaming past, is set to hit stores on November 11 — just in time for you to spend the next month and a half playing through all 30 included games before the New Year! While it will look just like the original console, this version will be able to operate on high-definition screens and comes with an HDMI cable, an AC adapter, and one NES Classic Controller. It is expected to retail for $59.99, but really, guys — this kind of nostalgia is priceless.

“We wanted to give fans of all ages the opportunity to revisit Nintendo’s original system and rediscover why they fell in love with Nintendo in the first place,” said Nintendo of America President and COO Reggie Fils-Aime. “The Nintendo Entertainment System: NES Classic Edition is ideal for anyone who remembers playing the NES, or who wants to pass on those nostalgic memories to the next generation of gamers.”

Here is a list of the games that will be included with the console:

A brief salute to my little sister, who I will probably see crawl out of her Legend of Zelda hole sometime next May. And yet another salute to humanity, for constantly bringing back our best achievements so we can foist them on the youth and legends will never die.

More like this
Starbucks’ Chocolate Cream Cold Brew Tastes Like This Retro Candy
By Emma Garza
Meet The Disney Imagineer Bringing 'Guardians Of The Galaxy' To Epcot
By Charlie Mock
The 'Hocus Pocus' Sequel Finally Has A Release Date & It Makes Total Sense
By Shannon Barbour and Radhika Menon
Remember These Ancient Pieces Of '90s Tech?
By Lucia Peters and Emma Carey
Get Even More From Bustle — Sign Up For The Newsletter