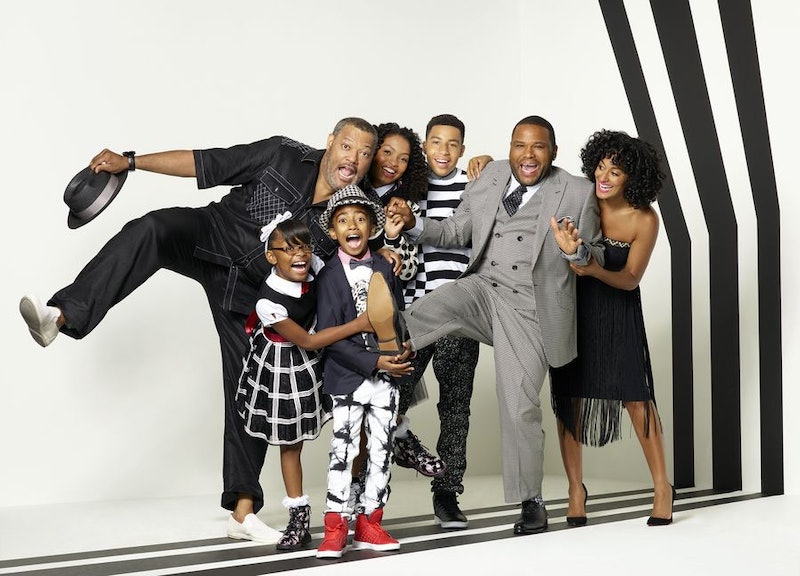 It may be summer — aka the time when most of the best TV shows are on hiatus — but something important is still happening in the television world. On Thursday, the 2016 Emmy nominations were announced, which means it's almost time to celebrate the best this year has brought us on the small screen. And as a huge TV fan, I'm not surprised at all by the shows that are being honored this year, especially in the comedy categoy. If you guessed that Black-ish is one of them, you guessed right... big time. Unsurprisingly enough, this ABC sitcom could seriously clean up in September. So how many Emmy nominations did Black-ish get?

Not only was the show nominated for Outstanding Comedy, but the cast itself also grabbed some noms, too. Tracee Ellis Ross was nominated for Lead Actress in a Comedy Series, while Anthony Anderson — who was on hand to read the nominations list — is also up for Lead Actor in a Comedy Series, Three nominations for a show that's only been around for two seasons (and already renewed for a third) is pretty impressive, right? It's good to see that this comedy is getting the recognition it deserves, and hopefully, that will translate over to some wins when the awards are finally here.

And as for the show's chances at actually snagging the win in these categories? That all depends on the Emmy voters, and it's up against some pretty tough competition. Black-ish will be dueling some big contenders in the Outstanding Comedy category, including Unbreakable Kimmy Schmidt and last year's winner, Veep. But after Black-ish tackled police brutality earlier this year in the episode "Hope," it's clearly about more than just the laughs. Now that the show has proven it's capable of navigating such difficult but important waters, especially as a comedy series, it would be awesome to see that side of the show appreciated in such a major way — even with a little shiny trophy.

If you're hoping Black-ish scores big, the 2016 Emmys air September 18, so start your countdowns now. But if it doesn't win, I doubt this will be the last shot for Black-ish to take home an Emmy or two. After all, if this is what this show gets after just two seasons, imagine what the nominations list could look like in 2017!

More like this
What’s New On Netflix: 'Stranger Things' & 'Somebody Feed Phil' Return
By Arya Roshanian
What’s New On Netflix: A Victoria Justice Rom-Com & The Return Of David Letterman
By Arya Roshanian
All The Theories About Kathleen Peterson’s Death
By Morgan Leigh Davies
'Who Killed Sara?' Won’t Return For Season 4
By Brad Witter
Get Even More From Bustle — Sign Up For The Newsletter