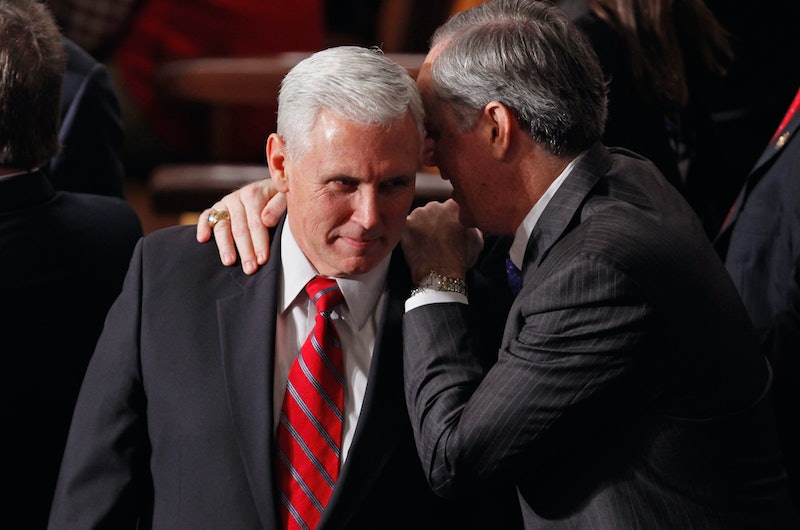 Earlier: According to a Reuters report Thursday, presumptive Republican presidential nominee Donald Trump will pick Mike Pence as his vice president on Friday. If you haven't heard of the Indiana governor before, you're not alone. But the Republican politician has a relatively long history in politics, and it isn't difficult to find out more about him. Unsurprisingly, a little digging into his voting record reveals plenty of things for queer people and immigrants, in particular, to fear. Pence has a history of being anti-immigration, anti-tax, and pro-war. But perhaps what stands out most about Pence is his history of opposition to LGBTQ rights.

Though Trump's Senior Communications Director has said he hasn't made a decision yet "and will be announcing at 11 a.m. tomorrow as planned," even the Indianapolis Star is reporting that he is, indeed, Trump's VP pick. It appears likely that he is the nominee.

So, with that in mind, here are six things you should know about Pence's history of LGBTQ discrimination.

1. He Opposed The Repeal Of Don't Ask Don't Tell

Pence said that "Homosexuality is incompatible with military service because the presence of homosexuals in the ranks weakens unit cohesion." In 2010, he said that repealing Don't Ask, Don't Tell would "have an impact on unit cohesion".

On Pence's old campaign website from 2000, he said that "Congress should oppose any effort to recognize homosexual's as a 'discreet and insular minority' entitled to the protection of anti-discrimination laws similar to those extended to women and ethnic minorities." He has consistently opposed any legislation designed to protect LGBTQ people from discrimination in the workplace, or otherwise.

3. He Is Very, Very Against Same-Sex Marriage

Pence believes that marriage is "ordained by God" and has sought to prevent same-sex marriage and even civil unions for his entire political career. In 2014, Pence sought to block U.S. District Judge Richard Young's ruling that Indiana's ban on gay marriage was unconstitutional, and backed Indiana Attorney General Greg Zoeller’s effort to appeal the ruling. He also supported an amendment to Indiana's constitution that would have banned not just same-sex marriage — but also civil unions. (It never passed because it was deemed too extreme, even for Indiana.)

Pence opposed the 2009 Matthew Shepard Hate Crimes Act, saying that President Obama just wanted to "advance a radical social agenda." He also opposed efforts to expand the definition of a hate crime to include the victim's sexual orientation, saying that a sermon condemning gay sex could be considered hate speech under the legislation. "This will have a chilling effect on religious expression, from the pulpits, in our temples, in our mosques and in our churches," he said. "And it must be undone."

In 2015, Pence signed the controversial bill that LGBTQ rights advocates say aims to legalize discrimination against same-sex couples, and which has led a number of businesses and governments to since announce economic boycotts of Indiana.

6. He Didn't Support Federal Funding For People With Living With HIV/AIDS — And Suggested Conversion Therapy Instead

In 2000, Pence's campaign website said he wouldn't support federal funding to care for people living with HIV/AIDS — with a disturbing caveat: unless money was cut to programs "that celebrate and encourage the types of behaviors that facilitate the spreading of the HIV virus." He advocated instead for programs that would seek to change "sexual behavior" — aka gay conversion therapy.

More like this
What The UK Blocking Scotland’s Gender Recognition Bill Means
By Sam Ramsden
Gen Z Are Twice As Likely To Identify As Queer, According To New Data
By Sam Ramsden
23 Super Sweet Things To Write In A Valentine's Day Card
By Karen Belz and Lexi Inks
What Is Pamela Anderson’s Net Worth? She Was Never Paid For Her Stolen Sex Tape
By Hugh McIntyre
Get Even More From Bustle — Sign Up For The Newsletter
From hair trends to relationship advice, our daily newsletter has everything you need to sound like a person who’s on TikTok, even if you aren’t.