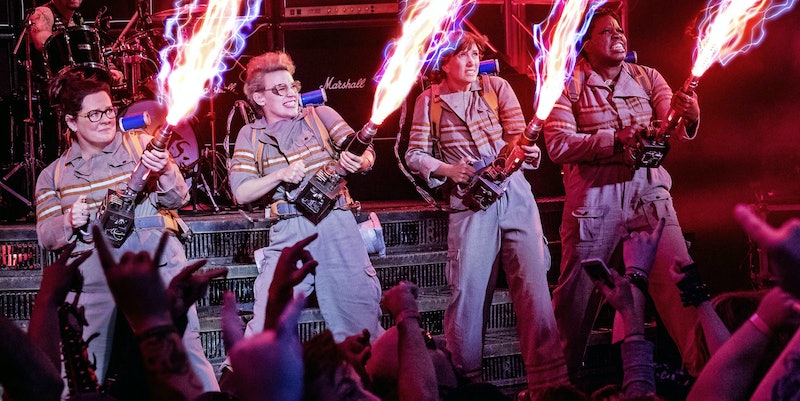 Can 2016's new crop of Ghostbusters save Manhattan from certain doom, or will the island be coated with green slime from Harlem to Wall Street? That's the question that the reboot of Ghostbusters will be asking, and fortunately fans can find out the answer when the new flick heads to to theaters on July 15. This time, it's funny women Kristen Wiig, Leslie Jones, Melissa McCarthy, and Kat McKinnon who are taking over for the guys from the 1984 franchise, and from the look of the Ghostbusters trailer, these women will fall into the ghostbusting business just as haphazardly as Bill Murray and company did. The 2016 Ghostbusters may be a bit different from the original, but according to MoviePilot, there are plenty of callbacks to the original that diehard fans may recognize — among them, the existence of "ley lines." Is Ghostbusters buzzword "ley lines" a real thing?

Here's what we know. According to MoviePilot, here is how ley lines come into play in both the original Ghostbusters and the new film:

Dana Barrett's art deco apartment building played an important role in the coming of Gozer, and the new Ghostbusters keeps the importance of NYC architecture intact when it comes to Rowan's plan. On the intersection of the ley lines on the island of Manhattan stands the Mercado Hotel, another art deco building that calls back to Dana's Central Park West apartment.

According to e-book Paranormal Encounters: A Look at the Evidence by Jeff Belanger, the term and concept of "leys" first came about in 1921 by Alfred Watkins, an amateur archeologist. Watkins noticed that some ancient sites fell into an alignment, and thought that there may be a connection between them. According to Ancient Wisdom, ley lines are "straight, often geometric alignments that ran across ancient landscapes, connecting both natural and sacred prehistoric structures together." If you're a believer in the supernatural and/or mystic, an intersection of ley lines could be the source of a supernatural phenomenon. In Ghostbusters, for example, it's a place where extreme "ghosting" occurs, because the ghosts can draw power from the specific spot.

However, not everyone who believes in the supernatural believes that ley lines are an actual thing. According to Belanger's book, Paul Devereux, author and editor of the Ley Hunter Journal from 1976-1996 has discredited the existence of ley lines. According to Devereux, ley lines — an offshoot of Watkins' term leys — were first introduced in the 1936 novel The Goat-Foot God, by occultist Dion Fortune, and the idea caught on with people interested in the supernatural.

After researching the subject further, Devereux realized that many of the points on Watkins map of ley lines "were really just chance alignments of points on maps," which he stated to Belanger was "awkward" to realize given his role as editor of a magazine on the subject. Belanger himself believes that "the term ley line is not specific enough to describe any peculiar linear or energy feature on our planet," though he also concedes that "there are many earth mysteries that we need to continue to explore with our open minds."

Ley lines is a real term used to describe geographic alignments. However, the validity of whether these lines have anything to do with supernatural phenomenon has to do with your belief system.

More like this
Michael & Kathleen Peterson’s House From ‘The Staircase’ Has New Owners
By Kadin Burnett and Kayla Blanton
What Does Doctor Strange’s Third Eye Mean?
By Arya Roshanian
What’s New On Netflix: A Victoria Justice Rom-Com & The Return Of David Letterman
By Arya Roshanian
Lisa Marie Presley Reviewed Baz Luhrmann’s ‘Elvis’ Movie On Twitter
By Grace Wehniainen
Get Even More From Bustle — Sign Up For The Newsletter