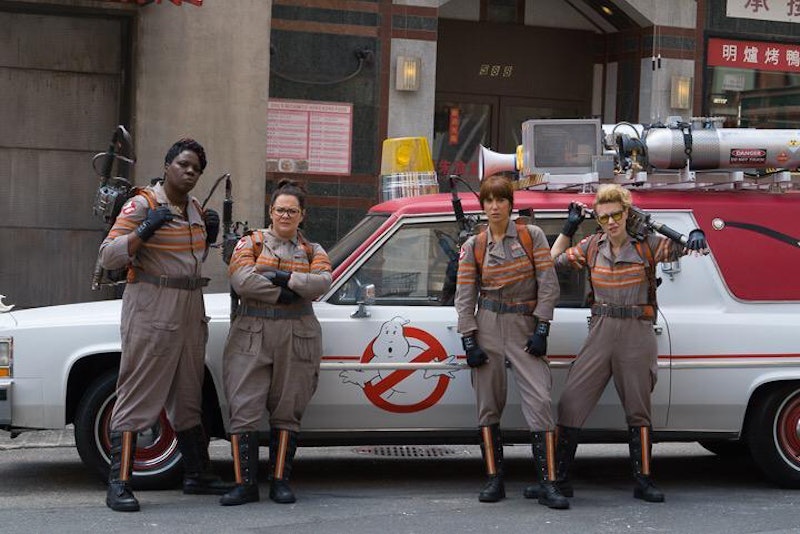 On Wednesday morning in Los Angeles, Sony Pictures unveiled the first trailer for 2016's Ghostbusters reboot starring Kristen Wiig, Melissa McCarthy, Kate McKinnon, and Leslie Jones for select fans and press. The auditorium was filled with the nation's die-hard Ghostheads, and director Paul Feig stood by watching, anxiously awaiting the criticism that was sure to come. But once the trailer debuted, the fans — most of them dressed head to toe in Ghostbusters costumes — gave the trailer (and the director) a standing ovation. "One more time!" they chanted in unison. And the Bridesmaids director, who admitted to being "very relieved" at their positive response, happily obliged. And now, the world can finally see what Feig has been up to since 2015's Spy .

The trailer, which offers up a handful of throwbacks to the 1984 original, opens by introducing audiences to the new team: Wiig, McCarthy, and McKinnon all play scientists, and Jones acts as the trios unofficial guide to New York City. She also provides the team with an old hurst (which they transform into a vehicle that could rival the 1959 Cadillac Ecto-1). In 2016's world of Ghostbusters, ghosts seem to be a new occurrence, and the gals must find a way to combat the deceased with scientific prowess and of course, humor.

Fans of the Bill Murray iteration will be pleased to see original Ghostbusters hardware making an appearance, as well as the original logo, and fan-favorite characters like Slimer, too.

Watch the first trailer for 2016's Ghostbusters, which hits theaters July 15, below: