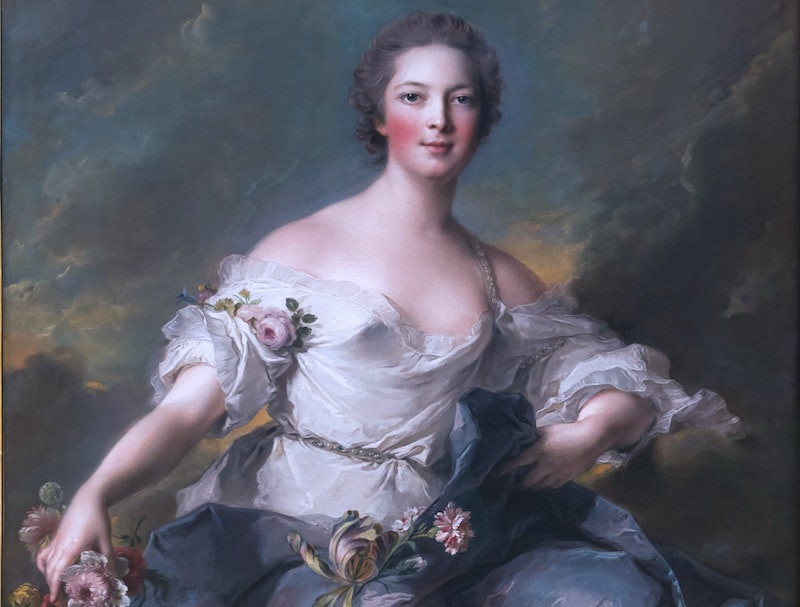 If you feel slightly risqué stepping outside wearing bootie shorts or clicking your way to your car while rocking heels and a mini, know that your outfit is just one in a long line of scandalous looks from history. While it can sometimes feel bold and brazen to wear a crop top or pull on a pair of fishnet stockings, it's interesting to consider why that feeling pops up in the first place. What exactly about a flash of tummy or a long look of leg is so shocking?

Well, it has everything to do with context. Across hundreds of years, women's fashion choices have taken on a political edge, whether folks meant for them to or not. The clothes we have long decided to wear or not wear have made many a statement. And as long as we have pushed back against the rules of society, it's a fair bet that the ~establishment~ has tried to push us back into our places.

Whether by embracing our sexualities too freely, hinting at past historical digressions in a tongue-in-cheek way, or looking to be too single and unattached, certain women's clothing options have been deemed inappropriate and disgraceful. Below are 11 fashion items that were super scandalous for their time — do any of them surprise you?

Even if a woman was completely covered, she could still look shocking because of what her silhouette hinted at. For example, if a dress hit to the floor and covered all the necessary bits, but perhaps represented a slight nod towards nightwear, then the whole outfit might have felt uncomfortably progressive.

That's where the Baroque period's "Open Dress" came in. According to the University Of Michigan, "Also found in Elizabethan times, these dresses, characterized by a robe-like overdress over one or more underdresses and skirts, were initially considered 'risqué' because of their resemblance to tea gowns. Tea gowns, which were loose, open robes fastened with cords or ribbons, were used by pregnant women and considered scandalous on young, unmarried ladies."

It would seem that when unattached women wore something that hinted at a silhouette assumed to be for marriage (aka men) alone, well, their attire was often deemed shameful.

During the Puritanical years, a proper woman in polite company was to be covered neck to toe, without so much as an ankle flashing in front of a gentleman. If that would occur, it'd be extremely embarrassing for all parties involved.

Fashionista reported, "The Victorians may have raised necklines, but they were also against flaunting a bit of leg. Women wore stockings and very long skirts year-round to prevent even a sliver of ankle from peeking out. The legs of wooden tables were even covered because they too closely resembled a female's appendages." Talk about being adamant.

I'm not even talking about the hip-flashing Baywatch bathing suits many of us are accustomed to in present day. No, this one-piece bathing suit looked more like a wetsuit a surfer might use to catch waves. But during the early 1900s, that was as good as being naked in public.

The Boston Globe reported, "Women waded into the water in black, knee-length, puffed-sleeved, wool dresses worn over bloomers with long black stockings, bathing slippers, and even ribboned swim caps," which made them appear decent for swimming activities.

However, when women's swimming world record holder Annette Kellerman came onto the beach wearing "a one-piece bathing suit that ended in shorts above her knees," she caused a scandal, according to The Globe. So much so that she got arrested for indecency.

The flappers were the daughters of the Victorian generation, so you can only imagine what a shock it must have been to see one's child run out the door in nothing more than a slinky shift. Shoulders, arms, and legs were bared, dresses covering little more than an old-fashioned girdle used to. Talk about scandal.

To put it into perspective, Dr. Ann DuPont, fashion-merchandising specialist, told the University Of Texas, “A lady’s ankle was pretty shocking stuff. To the point [where] they often had separate men’s and women’s staircases in Victorian houses in order not to risk the person walking behind a woman getting a glimpse of her ankle.”

Even the name hinted at the sensuality of this shocking attire, with the word "flapper" coming from the old Northern British slang meaning "young prostitute." Those dresses might be used as chic Halloween costumes nowadays, but in the '20s they were a moral uproar.

While images of pinup girls and Marilyn Monroe might make the '50s bullet bra seem iconic and commonplace, the extravagantly feminine silhouette wasn't met with the kind of easy acceptance you might think. The new torpedo look came into vogue right after the war, during a time when many women wanted to leave their drab, ration-inspired staples behind and embrace something more womanly and frivolous.

But not everyone was on board with this curve-enhancing look. To many, it signaled a kind of moral decline. Superintendent of Police Harvey J. Scott told the Brooklyn Eagle in 1949, "Women walk the streets, their curves accentuated by their dresses. But our real problem is with bobby soxers. They are the sweater girls — just kids showing off their curves and apparently liking it. What kind of mothers and wives are they going to be?" The absolute audacity of these women, eh?

While today a mini is often seen as just another option to wear come the summer, during the '60s it caused many a conservative member of society to wonder just where the next generation was headed. And the majority seemed to think it was towards some sexed-out, reefer-maddened version of hell.

Mary Quant, the alleged creator of the mini in London, recalled how the bowler-hat brigade of uptown men reacted when they first saw her minis displayed in store windows. Quant told British Vogue, "Middle age businessmen would beat on the window and shout, ‘It’s obscene, it’s disgusting.’ Extraordinary, isn’t it!"

And the best thing was that these display windows were paired with colorful, Crayola-like tights. She wasn't even promoting bare legs.

Going with the sexual revolution that the '60s spurred on, Yves Saint Laurent famously created the sheer organza blouse that was meant to be worn sans bra, which was supposed to be "less about pleasing the onlooker, and more about asserting equality between the sexes," according to Dazed. Considering that in 2016, most folks are still not OK with anything female nipple-oriented, his design was way ahead of his time.

In addition to sheer blouses, Laurent gave women another liberating tool for their wardrobes, this time coming in the form of a man's tuxedo tailored to the form of a woman. While today wearing a suit doesn't necessarily seem like too much of a risqué move, back in the '60s it was absolutely unheard of.

Dazed reported, "Entering the cultural consciousness at a time when many Second Wave feminists avoided discussing fashion directly, it radicalized evening-wear and irrevocably transformed the way women dressed." But while many strong-willed and bold women took up the trend, society wasn't going to help them own their liberation.

Business Insider recounted what happened when socialite Nan Kempner tried to enter an upscale Manhattan restaurant wearing the suit, only to get turned away. According to the publication, "Yet in the defiant style befitting of this androgynous, no-nonsense look, she removed the bottom half and waltzed into the restaurant wearing the jacket as a thigh-skimming mini dress instead. The manager later said that for formal dining attire trousers were as unsuitable as a bathing suit." I guess going in wearing a jacket alone was much more appropriate.

In the early 1970s, YSL designed a collection that saw the bourgeois he catered to surging to its feet in rage. It was, in fact, originally inspired by Robert Bresson’s 1945 film Les Dames du Bois de Boulogne, which told the story of a scorned socialite who tricked her ex-husband into marrying a former sex worker.

According to Fashionista, "Many of the clothes — a giant green-colored fur coat, dresses tightly fitted at the hips — were inspired by the styles worn by prostitutes during 1940s." While it might sound boldly trashy, the aesthetic wasn't the cause of offense per se, but rather, the subtext of the looks.

Keep in mind that most folks catching sight of the runway show for the line lived through the Second World War. AnOther explained, "Some argue that it wasn’t the 1940s references that outraged, but rather the blatant sexuality of the clothes, which evoked the memory of France’s ‘horizontal collaborators:’ The women that slept with Nazis and were subsequently publicly shamed by having their heads shaved and paraded down the streets in their underwear."

To many, this seemed unpatriotic and disrespectful. The fashion show reveal was cleared out as attendees largely deemed the collection a failure.

Who says your nightie has to stay behind closed doors? With the '90s grunge age, many women felt free to experiment with unexpected pieces and to work them into their daily styles. One way they did so was to translate the bedroom into the weekday. According to the Los Angeles Times, Versace's so-called "bondage" dresses looked like something inspired by S&M clubs," and slinky slip dresses were paired with cardigans, leather jackets, or jeans, making lingerie an everyday occurrence.

Getting your groceries in a nightie was perceived as fabulous for the fashion-forward, but not so much for those who had a more conservative outlook.

With the new millennium came in a declaration for our love of the thong, letting the little G-strings pop out from underneath low-rise jeans or hip-clinging mini skirts. The look was so popular that Sisqó even wrote a song about it (I'm sorry, but "The Thong Song" will now be stuck in your head all afternoon), while much of the older generation put it upon themselves to declare it an epidemic.

According to Fashionista, "In 2002, it was widely reported that a female vice principal in California physically checked about 100 female students coming into a high school dance to see if they were wearing thongs." Gotta protect the kids from their own bodies, guys.

But that's just the thing: From thongs-over-jeans to flashes of ankles in the 1800s, fashion has always pushed the boundaries regarding what society believes to be "decent" and in moral standing. And with every push, the conversation changes just a little bit more.