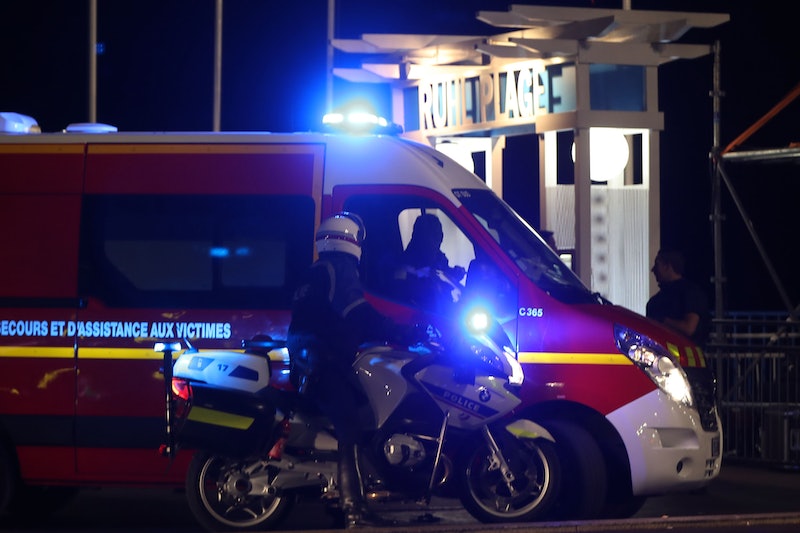 Earlier: Tragedy struck France on Thursday when a truck plowed through a crowd of people during a Bastille Day parade, killing at least 60 people and injuring 100 more. Reports are still trickling in and there's a lot that's still unknown about the incident, and many are wondering if the Bastille Day crash in Nice was terrorism, an accident, or something else entirely.

As of now, it's unclear. The motive of the driver, who reportedly was shot and killed by police after the crash, is unknown. It's no wonder why some are worried that it was an act of terror, given the recent spate of attacks in Paris, Brussels, San Bernardino, and Orlando. Nevertheless, it's too soon to conclude with certainty that this was terrorist act, because it may not have been.

According to The Telegraph, a witness to the crash told French media that "a gunman fired into the crowd before being shot by police." As of this writing, though, French authorities haven't confirmed that claim. There had been rumors of a hostage situation unfolding at a hotel in the city, but a spokesman for the French interior minister says this is not the case. Similarly, a fire erupted at the Eiffel Tower on Thursday night, but French police said that this was an accidental truck fire with no connection to the track crash.

Still, it's quite possible that this was terrorism. A U.S. official told The Daily Beast that American authorities are considering ISIS to be a "top suspect" in the attack, although by no means has this been confirmed. French authorities are reportedly treating the incident as an "attack," according to European media, although not necessarily a terrorist attack. Christian Estrosi told the Associated Press that firearms and grenades were found in the truck.

The White House says that President Obama has been apprised of the crash and is being updated on its developments. Donald Trump wrote on Twitter that, in light of the attacks, he'll postpone what was to be a press conference on Friday to announce his vice presidential running mate.

More like this
Taylor Swift, Kerry Washington & More Speak Out On Uvalde Mass Shooting
By Jake Viswanath
Photos Of Boris Johnson Drinking At A Downing Street Lockdown Party Have Surfaced
By Bustle UK
25 Quotes About Love To Share During Pride Month 2022
By Madeleine Aggeler and Emma Garza
Rebekah Vardy & Coleen Rooney’s Trial Has Officially Begun
By Bustle UK
Get Even More From Bustle — Sign Up For The Newsletter